While working at The Ski Hut in Berkeley, Calif., after graduating from the Stanford School of Business, Hap Klopp became interested in The North Face retail operation. Doug Tompkins (future women’s clothing empire owner and CEO of Esprit) had opened The North Face store on Columbus Avenue in San Francisco in 1966 and later a store in the old Stanford Barn in Palo Alto, Calif. 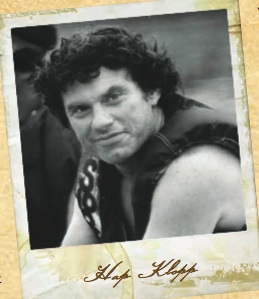 “His stores were primarily alpine ski shops,” Klopp said, “because Doug had visions of being an Olympic downhill racer. But he also sold some private-label outdoor gear, like sleeping bags bearing the label: ‘Made for The North Face by Sierra Designs.’”

After leaving The Ski Hut, Klopp learned that The North Face, now owned by the Hiersoux brothers, was losing money. “Concurrently, I was working on a brand idea that incorporated a retail store, and Tompkins had created quite an aura around The North Face brand.”

In May 1968, Klopp purchased The North Face retail chain. First, he closed the Orinda, Calif., store. Then he pressed forward on getting the new Berkeley Telegraph Avenue store up and running with a manufacturing space carved out inside the store, headed by Justus Bauschinger. Then Klopp set about getting a new corporate logo created—the one that still exists today.

Next, he turned his attention to manufacturing and the company’s first two products—the Ruthsack pack designed by Stuart Ruth and a full range of down sleeping bags.

That was followed by tents, technical apparel, and a unique warranty concept. “I decided that we needed to offer a full warranty on all our products. The warranty idea made for loyal customers, but because they would hold onto The North Face gear they owned forever, we had to offer them more products to buy.”

There were other things that set The North Face apart. One was its yearly catalog that featured employees using the gear on their own trips both here and abroad. “That concept seemed to make us and our products more normal,” Klopp said.

The catalog also became a place to promote environmental activism. For example, the 1974 catalog promoted the use of solar power, 1975 aroused interest in saving the Tuolumne River in Northern California from damming, 1976 supported Greenpeace, and 1977 editorialized about the importance of the Alaska Lands Conservation Act.

Then there was the catalog’s annual Ice-9 Award. Based on the subject of Kurt Vonnegut’s “Cat’s Cradle” novel, the award was given annually to those, like the Atomic Energy Commission, who The North Face felt were pursuing a faulty course with regard to the environment.

“The purpose of the Ice-9 Award,” Klopp said, “was to clearly state our corporate philosophy which was to help preserve the natural world. We wanted to have a company that was principled.”

As The North Face’s manufacturing grew out of the Telegraph Avenue building, the backpacking boom took off. “It was fortuitous that the market for summer goods took off, but we didn’t sit still. We decided to create a winter business and take risks with key vendors on new products,” Klopp said.

To create a winter business, Klopp invited Johannes Von Trapp of Vermont’s Trapp Family Lodge to come to Berkeley and explain how he’d successfully brought the Scandinavian idea of cross-country ski centers to the United States.

“With what Von Trapp told us, we worked with the Yosemite Climbing School’s Wayne Merry to create the first cross-country ski program in the West. One of Merry’s first instructors was Ned Gillette, who would become famous as an adventurer with strong ties to The North Face.

“Next,” Klopp continued, “we sat down with people like W.L. Gore and created a partnership, even though not much was known about their products at the time.”

Another partnership that came into being at the time was with Easton and the development of the first aluminum tent poles to go along with the introduction of the Oval Intention free-standing geodesic dome tent.

In 1981, the company introduced skiwear—considered a risky decision at the time. “I remember going to Ski Magazine in New York,” Klopp recalled, “and having their fashion editor Susan McCoy tell me that functional skiwear would never make it. Fortunately, the magazine’s hardgoods editor Seth Masia got our concept right away and backed it. We believed that the market was being underserved by fashion skiwear.”

With the success of the skiwear line and the continued boom in outdoor gear and apparel, The North Face was rolling along comfortably. But Klopp wasn’t satisfied.

“We were the first outdoor manufacturer to start marketing in Japan in the late ’70s, and then we headed to Europe in 1983 where we set up a distribution network with a manufacturing facility in Scotland. Brands have to be global, and we made that step.”

In 1985, Klopp took another bold step with a conference event he called Future Q. “My concern at the time was that specialty outdoor retailers were wondering what was going to happen to them—but rather than explore the future, they were becoming conservative and taking fewer risks.”

So he invited retail guru Peter Glen to put on a three-day program that included visits to respected San Francisco retailers, Glen’s brutal assessment of outdoor retailing and many of the retailers in attendance, and group sessions on trying to figure out what was coming and how to best respond to it. “We wanted to give retailers insight into the future and help them build their business,” Klopp said.

Since 1989, Klopp has written books, been a lecturer, consultant and investor in small outdoor enterprises.

As to his legacy in the outdoor industry, Klopp noted, “The fact that 11 of the people who worked for me went on to run outdoor companies is perhaps the most gratifying.

“In addition to being proud about this legacy of ‘building’ the people who built the industry, I certainly feel the pioneering efforts we did in environmental support and social activism (we sponsored the first AIDS awareness event in San Francisco among others) is something we were quite proud about.”

03/27/18
Woody
Story Circles that can see this:
Outdoors - All Public
Primary Story Circle:
Our Newsletter