Upon graduating from Northwestern University in 1969 with a degree in speech, Mark Erickson headed west, ending up in Berkeley, Calif. “I applied five times for a job at The North Face,” he recalled, “and finally, in May 1970, they hired me. Jack Gilbert handed me a pair of trimming scissors and a broom and said, ‘Make sure you’re using one or the other at all times.’” 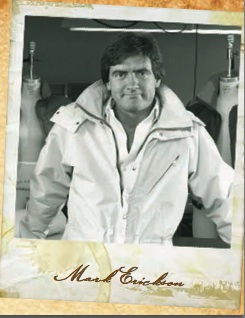 At $2.15 per hour, Erickson went to work under Justus Bauschinger, who was The North Face’s one-man design, cutting room and production management show. As talented as Bauschinger was, he was also opinionated and constantly at odds with Hap Klopp, the president of The North Face at the time.

“One Friday,” Erickson shared, “Justus and Hap got into a knock-down, drag-out argument and Justus walked out. Ten minutes later, Hap came down from his office, put his arm around me and said, ‘How’d you like to be the new designer at The North Face?'

I suppose he said that because I was one of the people who showed up every day not stoned and ready to work. I also think he did it because I knew where all the patterns were stored,” Erickson added.

Between his debut as a designer in 1970 and 1975, Erickson was immersed in work as The North Face grew exponentially every year. “The company was growing, there was a tremendous energy around it, it was fun and we were making cool products. Also the independent sales reps were creating what would become the outdoor distribution network,” he said.

Of the notable products produced during those heady times was the Big Foot synthetic sleeping bag, an anomaly in a world of down bags. However, it wasn’t a sleeping bag but a tent that brought Erickson to the forefront among outdoor gear designers. The tent was the Oval Intention, and its creation makes for an interesting tale.

“In 1975, The North Face and Sierra Designs were still doing A-frame tents. But then Skip Yowell and Murray Pletz got their JanSport dome tents going, and that got me thinking,” he said. “While this was going on, Bruce Hamilton was hired by The North Face. Bruce was a real fan of Buckminster Fuller, the father of geodesic design. The next character in the story is Bob Gillis, a hippie from the Santa Cruz Mountains who had tried in vain to get Gerry, Holubar, and others interested in his geodesic dome tent design.

“Well, one day Gillis arrives at The North Face in his old VW van with his wife and two naked kids in tow and pitches Hap Klopp on his design. It was crude, but showed possibilities.” Erickson and Gillis started working on the idea when into the story enters Jim Easton of Easton Aluminum who sees what the two tent designers are up to and says that he could adapt his Aeroshaft archery arrow shafts into some killer tent poles.

“Well, we started experimenting and soon had a free-standing geodesic dome tent with ultralight tent poles.” The Oval Intention debuted in 1975 and was followed a year later by the VE-24 and then a year after that by the VE-23.

Making the Oval Intention’s creation even more special for Erickson was a meeting with Buckminster Fuller.

“Bruce Hamilton got in touch with Fuller’s grandson who thought his grandfather would love to see the tent. He arranged a meeting with Fuller while he was visiting Venice, California,” Erickson continued. “We got to the hotel where we were to greet the great man, and it was this seedy dump. We knocked on his room door and were met by Fuller himself who was very gracious. He loved our concept and better the fact that we’d turned out such a useful product.” 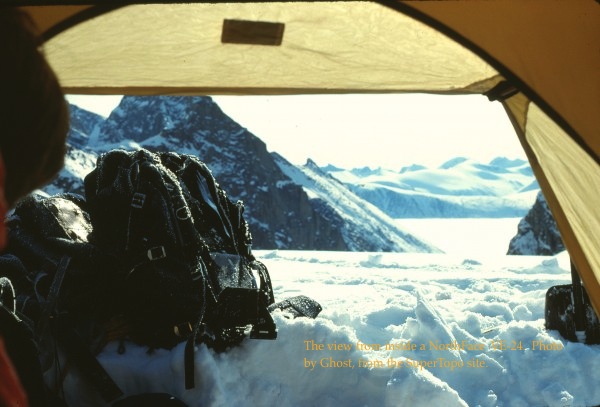 Two years after the geodesic dome tent breakthrough, Gore-Tex fabric was introduced, and Erickson—pushed by fellow employees and avid alpine skiers, John Kirschner and Bill Werlin—designed a technical line of alpine skiwear using the fabric.
“A lot of us were reluctant to do the skiwear line because of the culture clash between our regular backpacking North Face culture and the glitzy ski crowd. That was solved by really stressing function in the garments and putting them on ski patrollers first,” he said.

As the ’70s moved along, Erickson created the look that would last for years to come in the outdoors—the bright colored jacket or mountain parka with black patches at the shoulders and elbows. “The color blocking idea came about while trying to make as light and durable a parka as possible. To do so, we used very light fabric for most of the jacket and then heavy black fabric over the places where the jacket would get the most wear,” he said. Yellow and black were the dominant colors of the day. Erickson noted that the yellow was “Acapulco gold” and black was “the only color we could afford to get in the heavy fabric.”

Heading into the ’80s, The North Face started, as Erickson put it, “to lose its way.” So he left the company in 1988, and after a few months started Erickson Outdoors with his wife, Jan, in the spare bedroom of their house. “I’d noticed that L.L. Bean, Eddie Bauer and EMS were going more and more to private label and thought I’d offer them and others freelance design and sourcing,” he said.

With just a few dollars left in his bank account, Erickson bought an airline ticket to the East Coast to see EMS’s Roger Poor. “Roger gave us our first order for a rainwear line.”

03/27/18
Woody
Story Circles that can see this:
Outdoors - All Public, TNF
Primary Story Circle:
Our Newsletter