Alive in the Bitter Sea 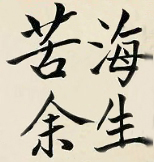 Al Tabor asked about a painting he remembered me having made that had the Chinese characters "alone in the bitter sea."

Al's only-slightly scrambled memory of the Chinese Communist slogan is even bleaker than the bleakness that so resonated with me 30 years ago: 'Alone in the bitter sea' is more than just a couple of steps closer to a gaping existential abyss than is my 'alive in the bitter sea.'

I picked up the phrase from Grace Fong, a young SD seamstress who had recently immigrated from Hong Kong after fleeing the mainland alone in a long midnight swim (Paul Kramer might remember her; she used to beat him at ping pong even wearing high heels). I had Ming (a cutter on the third floor in Oakland) paint it for me on a small square of stretched artist canvas. (Did I have it hanging on the wall above the desk on the Alice Street receiving dock? Can't remember. Maybe.) I still have it, it's hanging in our garage, though I might have to take it down now that 'alive in the bitter sea' sounds so blazingly optimistic compared to 'alone in the bitter sea.'

That group photo from 1985, it's hanging in my home office beside a black-and-white photo (out of focus, unfortunately) of me amidst many sacks of down in the warehouse, blowing a cloud of down and feathers from my open palm.

[[Could use some context plus date.]]

[[Might be good to have the black and white photo here]]

[[Need to add Ming as person]]