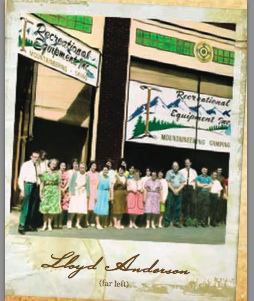 About the same time that Eddie Bauer unveiled his first down jacket, a Seattle Transit engineer and avid mountaineer, Lloyd Anderson, went shopping for a new ice axe.

The first shop he checked had one for sale for $20.   The Eddie Bauer store had one for $17.50. Eventually, Anderson found a store that had one for $7. The only problem was, it had to be imported from Austria.

When the ice axe finally arrived, it actually cost $12 and it wasn’t from Austria but Japan. This upset Anderson so much that he com­plained about it to anyone who would listen. One who listened was a Swiss-bom climbing partner, who gave him a catalog from Sporthaus Peterlongo in Innsbruck, Austria.

Anderson ordered an ice axe from the Austrian retailer, and when it arrived with a landed cost of $3.50, he and his wife, Mary, started ordering more gear for their climbing friends.

Then, in 1938, the Andersons and 23 climbing friends sat down and formed Recreational Equipment Inc. (REI) for the sole purpose of importing and selling outdoor and climbing gear and apparel. They based their company on the princi­ples of England’s Rochdale Cooperative (which started, fittingly, with a group of weavers in the mid-1800s): collective ownership, open membership, competitive pricing, and profit distribution through an annual patronage dividend.

Note: REI, recently celebrated its 75th anniversary. For a timeline and video, check out reihistory.com