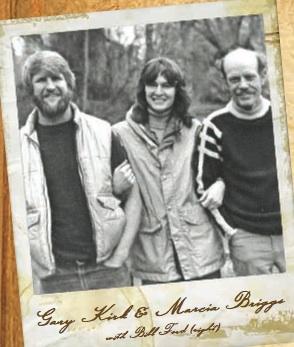 Caribou Mountaineering co-founder Gary Kirk became involved in the outdoors when he was in the Navy and stationed in Southem California. On shore leave, he’d head to Three Rivers in the Sierra where he fell in with a group of climbers.   Later, some of the group moved to Chico, Calif., to work logging jobs in the summer and be ski and climbing bums the rest of the year. That's where Kirk met Marcia Briggs, a native of Minnesota who was visiting friends in Chico. Within days, they hit it off and decided to become business partners, launching Caribou Mountaineering.

From the company’s inception, Briggs did all the design and sewing, while Kirk did the purchasing and managed the finances. “Gary was also attending Chico State on the G.I. Bill at the time,” Briggs said.

The company’s first products were tents along with packs for the expedition minded. But it was two smaller packs, the Cricket and Skeeter, that really caught fire.

"Our rep, Bill Ford, got us into the college bookstore market with those two packs,” Briggs said, "and it was the best thing we ever did. By 1976, our book packs represented 65 percent our business.

Ford also played a key part in getting Caribou Mountaineering into the soft luggage business—a category many outdoor veterans say the company created. "Bill came into the office one day with this raggedy old briefcase under his arm and I was so embarrassed that he’d be calling on customers with it that I sewed him up a fabric brief on the spot," Briggs said. "He loved it and that briefcase caught the eye of his customers. Soon they started ordering them, and soon after that we added duffels and all sorts of travel luggage and packs.”

With the luggage business now solid, Briggs branched out designing a line of women's jackets that took off at retail. "Even after our production was completely booked, we kept taking orders for the jackets. That was a big mistake and caused us to contract out the jacket production. The first contractor’s efforts were horrible and we took back most of what we’d sent retailers," she said. "The second batch was better; but cost us way too much and that put us on the ropes financially.”

In 1979, Caribou Mountaineering went looking for outside financing, which was provided by a Michigan group that bought half the company. Kirk left Caribou Mountaineering that year but Briggs stayed on. "There were some very exciting times during the next 11 years as the investment group trimmed the line to just those items that were making money. As a result, I was no longer struggling to make ends meet financially and had time to work on a catalog and improving our facilities."

Faced with being on the losing end of too many 5- to-1 board of director’s decisions, Briggs left Caribou Mountaineering in 1988 to become a freelance designer: These days, she teaches a class on entrepreneurial skills at California State University, Chico, and consults at a local small business center. Kirk, on the other hand, went on to spend several years working as a Hollywood actor before retiring to his state of Indiana.

Here's the introduction and table of contents for all of Woody's Trailblazers.

Dec-06-2020
#1
Mike McDonald (not verified)
Caribou Day Pack. At some
Caribou Day Pack. At some point in my cross country winter travels in about 1979 (or 1981?) I acquired a Caribou Day Pack - thinking it was bought new in Moscow idaho, Used the bejesus out of it for over ten years and donated to Goodwill after i bought a new pack pack that had more pockets for my day job requirements. Super durable pack. Pic of pack by others available if needed.
Top

From the Closet of Dr John Bouman: Odds and Ends.