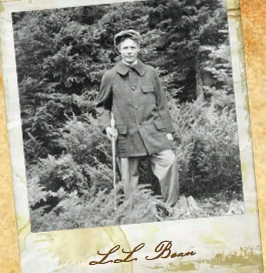 As REI started up in Seattle, L.L. Bean was already a successful hunting and outdoor gear retailer in Freeport, Maine.

The company’s namesake, Leon L. Bean, had been orphaned at age 12 and earned his keep through his formative years by doing everything from trapping and hunting to selling soap door-to-door. In his 20s, he worked in his brother’s clothing store, but his mindset was on a bigger project— making the world’s best hunting boots.

After much experimentation, Bean took some rubber overshoe bottoms, stitched lightweight uppers to them and took them out for a test. They worked perfectly, and Bean’s Maine Hunting Shoe was born.

In 1917, the L.L. Bean Maine Hunting Shoe store was opened in Freeport, Maine. Fishing and camping  gear  and supplies were added to the store’s retail mix in 1927.

Incorporated in 1934, L.L. Bean would become famous nationwide for its mail-order catalogs and, in 1951, for keeping the Freeport retail store open 24 hours a day,  365 days a year.