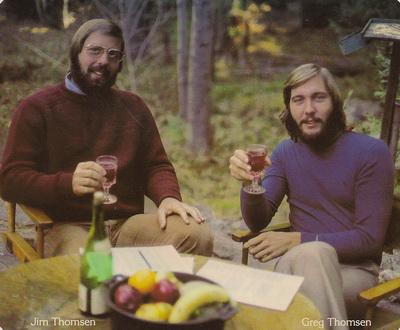 As children, Jim and Greg Thomsen spent summers with their father in Mammoth Lakes, Calif., where they grew to love the mountains. By 1965, they were backpacking on their own all over California's Sierra.

"In 1967, we both started climbing," Jim said, “and a year later, I was working at Kelty Pack making packs as well as working in the retail shop at the production facility when my wife, Laurie, got this idea to start a program to take kids into the mountains and teach them climbing, backpacking and cross- country skiing. Laurie, Greg and I decided to call the venture Wilderness Experience.” Working through Sport Chalet, their first outings were teaching cross-country skiing.

Two years into the new venture, Greg headed to Europe. “Once there, two guys from UCLA and I bought a Toyota Corolla wagon in Luxembourg and we drove it all the way to Nepal. Along the way, we stopped to climb in the Alps, Bulgaria, Iran, and Pakistan. We smuggled money across borders and got caught doing it, but still made it to Nepal." In Nepal, the trio decided to climb Mount Everest. "We thought we could do it," Greg recalled with a laugh, “but when we got above the Khombu icefall, we realized it was too much to handle without porters or sherpas, so we packed it in and I went off to wander through some unexplored areas of the country."

Greg was back home in August 1971 when Jim's wife, Laurie, died on a solo climb. “After Laurie's death, we went on offering classes, while Greg and I jointiy managed The Mountain Store in Tarzana (California)," Jim said. They also started making small accessories like sleeping back straps to sell at the store and to give to their Wilderness Experience guides to use. Then late in 1972, the brothers made a trip to Berkeley, Calif., to check out the outdoor gear manufacturing scene. While there, they became friendly with Class 5 owner Justus Bauschinger.

“Justus was a huge influence on me," Greg said. Jim added, "We figured that if Justus could make gear, so could we. He helped us buy a sewing machine, and a few months later, we rented a 1,000- square-foot space in Chatsworth, Califomia." Why Chatsworth? "Because it was near the Stony Point climbing area and we figured we'd be climbing a bit, Jim said. While Jim ended up with little time on the rock, Greg made it to Stony Point every weekend. Their first break as gear makers came when Mike Sturm of gear and apparel wholesaler Eiger Mountain Sports asked if they could make gaiters. They said sure, then bought a pair at retail, deconstructed them and re-created their own version. Then Sturm came to them with another project. "He'd apparently lost the French-made Millet pack line, and asked us to make an identical line, canvas bags and all," Greg said. "We did and affixed Wildemess Experience labels to them, which had been made by a label maker in trade for a pair of Pivetta Cortina hiking boots at The Mountain Shop. Suddenly, we had a brand."

But when Sturm's Millet shipment mysteriously came through, he told the Thomsens they were out of luck. Rather than throw in the towel, they showed the packs to Don Lauria at his Westridge mountain shop. Jim said, "When he looked at them, he said, ]ust what the world needs, another pack line."' Despite that, he took on the line and the packs sold through at Westridge and in every other shop where they were placed. Wilderness Experience was morphing into a real business. It was about this time that the brothers met with Snowlion boss Bill Simon and former Snowlion sales manager turned independent rep Marty Stilling. "We agreed in principle that Snowlion would make sleeping bags and tents and we'd concentrate on packs, and that Martys group would sell both lines, "Jim said. (Stilling's Roundtable rep group is considered the first national outdoor rep group and the first to employ climbers like John Bragg and Jim Donini as reps.) Through 1974 and 1975, the pack business grew to the point that Wildemess Experience added the tagline, "We only make backpacks and that's why we're the best," to all its ads and brochures. Things changed when Snowlion went out of business in 1978 and the Thomsens decided they could make all the products that the Berkeley manufacturer had made. "At first we decided to add all the new products under the Solo brand name, but eventually decided against that, "Jim said.

Not long after expanding the product line, the brothers were approached by W.L. Gore to use its new fabrics, becoming the third outdoor company to use Gore-Tex in apparel. They also secured an order to do all of L.L. Bean's Gore-Tex outerwear, but there was a problem. W.L. Gore thought the brothers were a credit risk and wouldn't sell them the quantity of fabric they needed. So Greg flew to Maine to talk L.L. Bean CEO Leon Gorman into buying the fabric for his company. “During that visit, Leon and I discussed the possibility of Widerness Experience opening a production facility in nearby South Freeport,” Greg said. "When I asked him if it would mean more business from Bean if we were located nearby, he said no and I dropped the idea." The L.L. Bean order was the first $1 million order Wildemess Experience received. Not long after that came a big order to make luggage and duffels for Eddie Bauer. That order was followed up with Wildemess Experience purchasing Bellwether's sleeping bag operations in San Francisco to add a Polarguard fill line to its down bag offerings. By 1980, Wilderness Experience was a dynamic organization with 250 employees and a new 75,000-square-feet production facility in Chatsworth. Greg was off to China as one of the first outdoor manufacturers to check out the possibilities of production there.

"A year later, Jim Donini and I went to China to climb in a very remote area of the country. This was long before the Chinese opened the country to tourism," Greg said. With the help of several Price-Waterhouse employees who had been in their climbing classes years before, the brothers decided to float a stock offering in 1982. “Nike has just gone public with their IPO and we basically copied the verbiage from their prospectus," Jim said with a laugh. “By the time the offering came public, we were into it for about a half a million dollars. If it hadn‘t worked out, we would have been doomed." 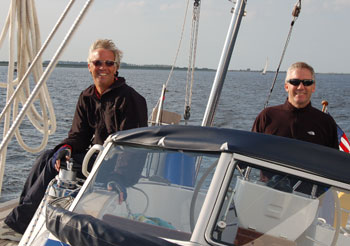 Three years later, Jim and Greg started to have differences of opinion on business matters. While Jim, as head of pmduction, wanted to continue making gear and apparel in the company's Los Angeles sewing facility, Greg as head of design and marketing, was pushing to move all production offshore. The brothers were also experiencing the added pressure and scrutiny of running a public company. Jim quit in 1983 and started teaching classes in small business and outdoor recreation at California State University, Northridge. He also bought two outdoor shops: one in Northridge, Calif., which was later sold, and the second in Mammoth Lakes, Calif., which was eventually closed.

Greg stayed on at Wildemess Experience until 1986, when he sold his stock in the company to Gary Wennick. (Wennick later founded Global Crossing.) First, he took off to Africa on several casual expeditions before returning to help rep Mel Hetzer with the Reebok running shoe line he was bringing in from England. Then he received a call from Nike boss Phil Knight, asking him to join the ranks at the Oregon company where he helped launch the ACG brand and acted as the company's director of marketing for apparel. While Greg was at Nike, Jim tried to wrest control of Wildemess Experience back in a proxy fight. But the attempt failed, and he started to work with Larry Harrison at his Earth Games rep group. Greg eventually left Nike and founded a company called American Sports Group that launched, among many lines, Heavy Hitters with former NFL football player Ronnie Lott, and also handled sourcing for a multitude of outdoor companies. In 1994, Jim was hired by Wisconsin-based Downers to consolidate its recently acquired JanSport operations. After VF Corp. purchased JanSport, Jim stayed on and expanded the brand's presence in Europe and the Far East. He moved to Europe in 1999 to expand VF's Eastpak brand's presence there. Jim also expanded VF's brand presence in Europe by selling Kipling, JanSport, and Eastpak from his office in Belgium.

Greg also did a bit of work with JanSport, designing a new pack (the Big Student) in 1995 to be produced offshore as an experiment. Based on that pack's quality and its success at retail, JanSport moved all of its pack production to China two years later. Today, Jim is retired, and he and his wife live on their sailboat spending most of the year sailing European waters. "It's a dream come true," he said. Greg still has American Sports Group, but he recently sold all his stock in its Youngstown Equipment and Mountainsmith brands to Blackstone of Missouri. He and his wife plan to take their 10-year-old daughter out of school for a year to travel around the world. "We'll spend six months in Asia and six months in Europe. It should be wonderful,” he said.