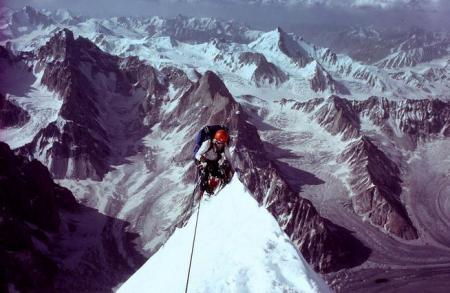 If your father is a climber who takes you, your brothers and cousin out climbing starting at an early age, the odds are good that you might become a climber when you grow up.

Such is Jeff Lowe’s story. Growing up in Ogden, Utah, in the 1950s, Jeff, along with his brothers Mike, Greg and Kim, plus cousin George, were grade-school kids when they started to climb.

“Dad took us to the Tetons in the summers, and we hung around the guide’s camp. My first big climb was the Grand Teton with my dad when 1 was 7,” Jeff remembered.

An auspicious start without question and one that led him to become intent on climbing starting at age 12. “Greg and I used to go out after school and spent most of our summers climbing around Ogden and up in the Tetons.” While Jeff started alpine ski racing in high school in the late ‘60s, Mike, Greg and George got into doing winter mountaineering and ice climbing in the Tetons. “Finally,” Jeff said, “I gave up ski racing and joined them.”

As the ‘70s rolled around, climbing took over his life. “I didn’t do anything but climb for 10 years except for working a few months here and there at Outward Bound to raise money.”

Just prior to Jeff’s total commitment to climbing, his brother Greg started making packs in the basement ol the family house in Ogden. “Greg needed a big pack that would not only carry loads into the Tetons but also be suitable to climb with.” Lowe Alpine Systems was born.

The burgeoning company’s first product was the Expedition Pack, “a boxy simple bag on a simple frame,” and it led lo other pack designs during the late ‘60s and early '70s.

Then, in 1973, brother Mike bought most of brother Greg’s interest in the pack-making business and moved production to Louisville, Colo., just outside of Denver.

Jeff said he was involved peripherally, giving Mike feedback on the company’s products. Come the ‘80s and he was finally hired by Lowe Alpine Systems just as the company started expansion into apparel and climbing hardware.

“The apparel and hardware programs, while nice, basically started to put us under. For example, we were selling tents and sleeping bags and not making a cent on them,” Jeff said.

Eventually, he spun off the Latok sub-brand. “I talked eveiyone into letting me do the climbing hardware and some Bob Culp technical clothing designs as a separate entity.” Many outdoor specialty retailers fondly remember the Papillon pullover shirt as one of the unique Latok apparel pieces.

“A few years into Latok,” he said, “we ran out of money and I turned the company over to Lowe Alpine Systems. The apparel and outerwear we’d done for Latok would become the basis for Lowe Alpine’s clothing line.”

Despite a loyal following for its apparel and outerwear, Lowe Alpine Systems floundered and was sold to the English company Famco in 1998. But before the sale had gone through, Jeff was trying his hand at sponsoring climbing competitions, working with the Winter X Games on its ice climbing tower, and consulting with outdoor and climbing companies.

Today, besides consulting work, he runs a non-profit organization called Ogden Climbing Parks. “Our goal with Ogden Climbing Parks is to give people better access to the mountains, climbing areas, Whitewater runs and outdoor experiences in and around Ogden,” Jeff said.

Woody's profile was published in 2007. Much has happened in Jeff Lowe's life since then.  Fundraising is continuing for a full-length movie, Metanoia, to be released this year. It's narrated by adventure writer Jon Krakauer. Info at http://jeffloweclimber.com

Also, a moving 2014 update on Jeff Lowe, replete with short video, can be found here

Photo above of Jeff Lowe, climbing the North Ridge of Latok I in the Karakoram of northern Pakistan in 1978, made 1,000-plus first ascents during his extraordinary career. Latok is a knife-edge of granite and ice that rises 8,000 feet from the Choktoi Glacier. (Photo by Jim Donini, courtesy of Jeff Lowe, via John Meyer & Denver Post)