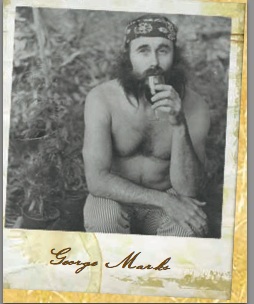 While studying French at then-San Francisco State College, George Marks became friends with a close-knit group of people who were into mountaineering, backpacking and rock climbing.

“Through that group,” he recalled, “I met many who would go on to become the super stars of the industry—Royal Robbins, Yvon Chouinard, Allen Steck, the Long brothers and George Rudolf, to mention but a few.”

However, being part of the rather small outdoor industry of the time held no interest for Marks. His passion was language, and as soon as he graduated college in 1957, he went to France to work at the Lycee de Garcons in Thionville, then off to work in Germany. During his three years in Europe, he stayed active—ski touring, climbing and doing other outdoor activities.

“After my return in the fall of I960, I took a job at the Ski Hut in Berkeley working lor Allen Steck, who was manager of the retail store at the time.”

Soon adventure called, and thanks to the Long brothers, Marks became the logistics officer for the U.S. Antarctic Research Programs for a National Science Foundation-funded project in McMurdo, Antarctica.  “During my two years at McMurdo,” Marks said, “I gained invaluable experience in how to cope with low temperatures by honing my skills at designing tents and outerwear.”

Back from Antarctica in 1963, Marks returned to The Ski Hut, where he went to work at the retailer’s Trailwise gear manu­facturing enterprise. There, he met Bob Swanson who was in charge of The Ski Hut’s mail-order operations.

“Over the next two years, Bob and I became good friends, and with capital provided by our mutual friend, David Buschman, we co-founded Sierra Designs in 1965.”  Thus began a long fruitful relationship with Swanson in the role of general manager and Marks as head designer.

Based in Point Richmond, Calif., just west of Berkeley, Marks and Swanson had a small retail operation, a mail-order catalog, and also made sleeping bags under contract for the likes of The North Face.

Small in size but large in customer satisfaction, Sieira Designs gained a solid reputation for products like the bombproof Glacier tent and the 100, 200 and 300 sleeping bags.

The business grew to the extent that it required addi­tional space to accommodate more seamstresses and a larger retail presence. With the move to an old paint company warehouse at Fourth and Addison streets in Berkeley, Sierra Designs’ business flourished, due in no small part to the runaway popularity of the company’s 60/40 Mountain Parka and expanded wholesale operations.

The company doubled in size for several years, and various large companies came courting. After some consideration, Marks and Swanson decided to sell to the CML Group in 1971. CML was a big conglomerate of the time and had Kelty as part of its growing portfolio of companies.

Marks continued to work at Sierra Designs for almost 12 years before leaving, as he put it, “at CML’s invitation,” in the fall of 1984. “Life there had become less than enchanting as all creativity had just about dried up as it was all about ‘the bottom line.’ I left with no regrets,” Marks said.

Out of Sierra Designs, Marks again joined Swanson in a new venture called Walrus Tents. “It was a struggle from the first,” Marks said. “There was never enough money, and the market was now crowded with other tent makers, mostly from Asia. We attempted a garment line, but the timing was bad and we could not sell what we had made.  It was also the time when domestic manufacturing was no longer feasible.”

Walrus was eventually sold to REI.  Marks said,  “(With) nothing left for me in the U.S., I decided to move to China and see if I could put a new life together in the now rapidly devel­oping Chinese economy.’’

And so from 1993 to the present, Marks has been the lead designer for Dark Horse Trading Company, making product for clients in diverse sectors of the outdoor and other markets.

And, gifted linguist throughout his life, Marks today speaks Mandarin like a native.

And here's George's own Brief History of Sierra Designs.