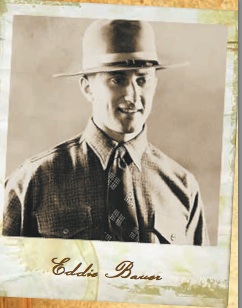 Under new ownership, Kelty would eventually diversify from packs, even dabbling in making down jackets for a time…and if there’s one garment that stands out as a landmark product in the early days of the outdoor business, it is the down jacket origi­nally created by Eddie Bauer.

Bauer’s inspiration for the jacket came during an ill-fated fishing trip in 1928, when he came close to dying from hypothermia. Recalling an uncle’s story about how his life was saved by wearing a quilted goose-down coat during the Russo-Japanese war, Bauer started tinkering with down jacket designs. In 1936, he unveiled his Skyliner jacket, sold exclusively through his family’s Seattle general sporting goods store.

During World War II, Bauer received a government contract to make down-filled flight suits, and since his products were the only ones to bear a private label, the brand developed a loyal following among veterans and their families.

Postwar, Bauer was deluged with so many requests for his down jackets that he created a mail-order catalog business in 1946. That business remained family-owned until the Eddie Bauer company was purchased in 1971.
[Next up:  REI]

Nov-15-2015
#1
http://www.pint... (not verified)
Trailblazers: Eddie Bauer | OutInUnder - Slow Social Media
I'm not sure where you are getting your info, but good topic. I needs to spend some time learning much more or understanding more. Thanks for fantastic info I was looking for this info for my mission.
Top