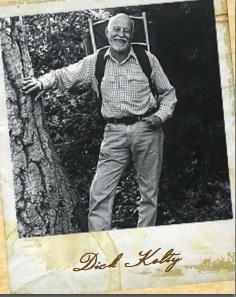 Not quite a lifetime but more than a thousand miles west and south of George Lamb and Boulder, an outdoor gear revolution had begun in Southern California. Leading the way with inventive new products were several aircraft industry engineers, most notably Dick Kelty.

Kelty worked at Lockheed prior to and during the war. In the 1950s, he began making aluminum pack frames and packsacks at his home. The frames were bent by hand over wood mandrels in Kelty’s home garage, while the packsacks were sewn in the family living room by his wife, Nina. In 1953, Kelty made 29 packs, which were sold to his friends out of his home/store.

By word-of-mouth, sales grew to such an extent that the Keltys opened a small store in Glendale, Calif., and started working with a limited dealer network including Highland Outfitters in Southern California, the Holubar store in Boulder, and Mary King’s Gerry store in San Francisco.

All was good except that Dick Kelty didn’t like having to put the ends of his pack frame into his pant’s back pockets to stabilize his load while hiking. So he attached a plain webbing belt to the frame ends and buckled it across his waist. That stabilized the load and led to his inventing the padded waist belt.

With padded belts, Kelty’s A2 and B2 packs became must-haves for avid backpackers. Sales grew and a larger production and retail facility was opened in Glendale.

In 1968, all manufacturing operations were moved to Sun Valley, Calif., where Kelty introduced its famous Tioga pack in 1973. That same year, the Kelly family sold the company to new owners.

In 1992 when interviewing those to be profiled as part of the “Outdoors Pioneers” Malden Mills sponsored project, Dick Kelty refused to talk. Luckily his son Richard (involved in outdoor with his Sierra West manufacturing company) was most helpful and I got the profile done and sent it to Dick.

Dick wrote me on 5/28/92 with two minor changes and: “sorry to have been such a difficult old bastard. After a bad experience or two, I long ago swore off all media interviews. Your request coincided with a second, though not too serious, heart attack.  A poor excuse of course, but the best I can think of at the moment.”

Years later when Dick passed his widow contacted me asking if my profile could be included in a memorial piece. Of course.

BruceJohnson
Offline
Joined: 11/09/13
Padded Waist Belt Attribution Correction
I noted was credit being given to Dick Kelty for inventing the padded hip belt. He did not. He was rather tardy in the field of comfortable, ergonomic hipbelts w hip suspension.... There is a story told by Jack Stephenson of Warmlite about Dick coming around to Jack's house in about 1958 and loading up one of Jack's packs with 30 lbs. (Dick was already carrying Jack's down sleeping bags in his Glendale store). Jack's pack had a rather well-designed padded, hip-carry suspension system. Jack is quoted in my book about Warmlite (don't have the exact quote at hand tonight)-- Dick saying to Jack,  "Wow, this is a lot more comfortable than my packs." But Dick felt it would add too much cost to his packs to add such a true hip-carry suspension, so Kelty packs continued to have their webbing hip straps for many years, not introducing good padded hip-carry belts until the early 1970s.  Andy Drollinger at A16, also a Southern Calif. cohort, and also an engineer, developed an excellent padded, hip-carry design by the early 1960s.  I have webpages on both A16 and on Warmlite. For more details: http://www.oregonphotos.com/A16-pg1.html [see the section on 'History of Gear Credit #2--- The A16 Pack Line' - editor] http://www.oregonphotos.com/Kelty-1.html
Top