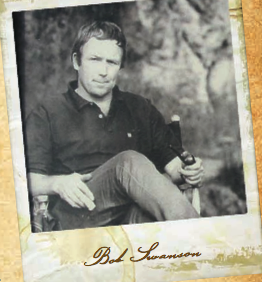 During the summer of his final year at San Francisco State College in 1961, Bob Swanson worked in the Central Coast town of Big Sur, Calif., when he got interested in kayaking along California’s coastline. “That,” he said, “somehow led to lots of hiking around Big Sur and an interest in the mountains.”

After buying a French-made rucksack, Swanson headed off on his first-ever trip to California’s Sierra. “Having been raised in Philadelphia,” he recalled with a laugh, “I really didn’t know there were mountains like the Sierra.”

Despite his love of the big mountains, he headed back to Big Sur to work at Nepenthe, arguably the hippest restaurant in the United States at the time and the home away from home for countless artists, writers, musicians and beatnik poseurs.

“In 1962, I left California and drove to Boulder, Colorado,  and I started knocking on doors in search of work.” He landed a job at LeRoy and Alice Hoiubar’s small outdoor shop. Ten months later, he headed to Berkeley where he got a job at The Ski Hut/Trailwise running the mail-order operations.

There, he met George Marks, and in 1965, they founded Sierra Designs. “We were both interested in the mountains and in climbing and backpacking, and making gear for those activities seemed like a happening business.”

Out of a small building in Point Richmond, Calif:, Swanson and Marks handled every single aspect of their burgeoning business together. “I came up with the design concepts as I was more conversant with the marketplace and George executed them. Slowly, I evolved into the business person in our enterprise,” Swanson said.

From the start, Sierra Designs (a name Swanson came up with) was noted for its tents and down products. including jackets, parkas and sleeping bags.

The business grew and Sierra Designs moved from Point Richmond to Berkeley in 1968. With the change of address and expanded sales came some of the outdoor industry’s most interesting catalogs, featuring the Bodie, Calif., ghost town, the West Coast Trail on Vancouver Island, and water-colors and sketches by a top California ailist.

All this called attention to Sierra Designs, and large corporate suitors came calling. “We could have sold to Parker Pen for cash,” Swanson said, “but we decided to go with CML mainly because of who they owned at the time—Kelty, Hood Sails, Boston Whaler, among others— and the prospect of getting rich via stock options.”

Unfortunately, they didn’t get rich, and after four years and growing acrimony with the CML operations people, Swanson left Sierra Designs in 1979.

Looking for new opportunities, Swanson partnered again with Marks and their longtime friend and Sierra Designs associate Henry Gruchacz to form Walrus Tents. "We had some unique tent and apparel designs and fought the good fight for nine years before selling the company to REI in 1993," he said.

"Trust me, it was a tough go and we were in bad shape near the end, but REI paid off all our creditors. I went to work for them in Seattle for seven years, while George got a contract in China where he eventually stayed."

These days, Swanson lives in Friendship, Maine, where he does the design work for Big Agnes along with repping RuffWear in Maine, Vermont and New Hampshire. He stays active outdoors by sea kayaking and hiking.

Aug-22-2019
#1
Leta swanson (not verified)
i enjoyed reading this
i enjoyed reading this article. My name is Leta Swanson I’m one of his two daughters. Not sure if anyone reads these comments but I’m writing a biography about my dad and what really happened between Sierra designs and the north face. I’d love to get more info from you and would be more than happy to do an interview with you guys. I want to keep the history of my father and George alive, and for outdoor enthusiasts to know the true and complete story. You can email or contact my cell: 510.731.9125. Thanks for writing about my dad, I miss him everyday. Best Regards, Leta
Top
Sep-08-2020
(Reply to #1) #2
Jim Cohee (not verified)
Leave a Comment. (Please,
Leave a Comment. (Please, note, if you're not logged in, your comment may take a few minutes to appear. It's run through a spam detection system.) Leta, I lived in the basement studio at 606 Kansas Street in San Francisco when your dad owned the place. I had worked with his wife, Susan Garah, at the Sierra Club. Bob was very kind to me and I have an anecdote or two for your book. (No business, just personal stuff.) I'd love to find Susan, if that's possible. (I remember Oona when she would walk through my little studio with a bottle in her mouth.) And I remember your mother when she was pregnant with you. With good wishes, Jim Cohee
Top