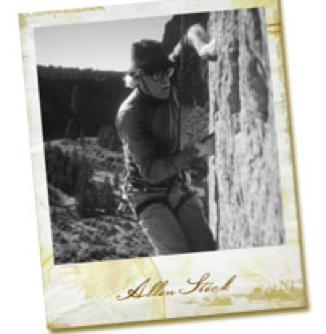 In the early 1940s, 16-year-old Allen Steck and his brother George headed from their home in Oakland, Calif., to the Sierra to go climbing. Without any hardware and unroped, the two lads made what became the first ascent of the northwest ridge of Mount Maclure. The event turned Steck into a mountaineer for life.

Following a stint in the Navy during World War II, Steck said in a 1991 interview, "I slipped into the climbing scene." Slipped as in making climbs in the Sierra, Italy’s Dolomites, the French Alps, and the third ascent (first north face ascent) of Canada’s Mount Waddington.

With those climbing travels at an end, Steck returned to the Bay Area and enrolled in the Graduate Language School of UC Berkeley to study German. His idea was to teach the language when he graduated, but gradually he grew disenchanted with the idea. Instead, he headed down University Avenue from campus to take a job on the sales floor of The Ski Hut in 1952.

By 1953, he was the store manager and then moved on to the Trailwise manufacturing side of the business. "I was interested in the designing and making of things," he said. Among his pet projects was the breakthrough Slimline sleeping bag design.

"I still consider the Logan climb the finest one I ever did," Steck said in 1991. "I wonder how we ever managed to succeed where so many others had failed."

There were other climbs to come, including the 1966 third ascent of El Capitan’s Salathe Wall with Steve Roper and Dick Long.

A year later, Steck, now 40, co- founded and edited, with Roper, the first edition of Ascent, a stylish, beautifully illustrated and literate climbing magazine. The magazine would flourish for close to three decades.*

In 1969, Steck’s long interest in the far reaches of the world led him into a partnership with Leo LeBon in a new venture called Mountain Travel, America’s first true adventure travel company. Then, in 1972, he co-authored the book "Wilderness Skiing" with Lito Tejeda-Flores, and authored "Fifty Classic Climbs in North America" in 1979.

From the time he co-founded Mountain Travel to the time he retired in 1985, Steck made about five annual climbing trips, and along with his brother, George, made an 82-day traverse from Lee’s Ferry to Lake Mead along the North Rim of the Grand Canyon in 1983.

Retired and interested in travel to less adventuresome locations, he none-the-less celebrated his 70th birthday by joining a group that re-ascended his Salathe Wall route, now called the Steck- Salathe Wall.

* Copies of older issues of Ascent are hard to come by. (It has since been relaunched as a journal by Rock and Ice.) But here's a great quote:

“We do not deceive ourselves that we are engaging in an activity that is anything but debilitating, dangerous, euphoric, kinesthetic, expensive, frivolously essential, economically useless and totally without redeeming social significance. One should not probe for  deeper meanings.”

Also of interest:  A Yosemite Climbing Association interview with Allen Steck from 1995:

Jan-18-2021
#1
Jim Lawyer (not verified)
That's my photo of Allen
That's my photo of Allen Steck at Smith Rock. Please credit me (Jim Lawyer)!
Top
Aug-27-2021
#2
Scott Presho (not verified)
In the mid-1990's, I was
In the mid-1990's, I was belaying my friend Rob on Firecracker at Donner Pass when Allen Steck and a very nice woman scrambled up to the belay. Allen was curious about the route we were on. I gave him the name and the rating. He in turn shared some of his home dried bananas with me (They were quite good!) We had a good chat while Rob fell and hung several times on lead as he worked out the roof sequence. After Rob finished the pitch, Allen and his friend said their goodbyes and left. When Rob got back to the bottom of the route, he asked me who I was talking to. He was quite bummed when I told him because he had pretty much butchered his onsight attempt in front of a climbing legend.
Top

02/07/21
Woody
Story Circles that can see this:
Outdoors - All Public
Primary Story Circle:
Our Newsletter