Of all the second-generation outdoor industry trailblazers, the most visible and best known today is Yvon Chouinard. As an advocate for the environment, adventurer, author, pioneer in the making and marketing of climbing and outdoor goods, and one of the most environmentally concerned members of the outdoor manufacturing community, Chouinard remains as vibrant a force today as he has been for three decades. Already known in American climbing circles, Maine native Chouinard started making pitons for Yosemite big wall climbing in 1957 on a secondhand coal-fired forge. These pitons would play a key role in his climbing efforts, like the second ascent of the Nose on El Capitan in 1960, and the first ascent, with Royal Robbins, Tom Frost, and Chuck Pratt, of the North American Wall on El Capitan in 1964.

In 1966, Chouinard and Frost became partners in Chouinard Equipment in Ventura, Calif. They continued to make pitons and other rock climbing hardware, but soon became interested in ice climbing and revolutionized ice climbing tools.

1970 proved a turning point for both Chouinard and his burgeoning business enterprise. On a visit to Scotland, he took a liking to sturdy cotton rugby shirts for climbing and decided to import them to the United States for sale. On his return home, Chouinard opened the Great Pacific Iron Works store in Ventura.

Apart from getting into retail, Chouinard was concerned by the damage pitons were causing to Yosemite’s rock walls and started producing a line of chockstones that would eventually include hexentrics and stoppers.

And as important as Chouinard’s entrance into retail and clean climbing were, it was the issuing of the 1972 Great Pacific Iron Works catalog that would have the most significant and long-lasting affect on his business and on the American outdoor market. The catalog was considered a work of art, literate in tone. Doug Robinson’s “Clean Climbing” essay set the tone for climbing ethics for years to come.

“This was our first ‘call to action’ to our friends and customers,” Chouinard said, adding, “Today, we still have calls to action in our catalogs and always aim to give people a way to personally make a difference in the environment. If we see a problem in the environment, and there are plenty, we give specific actions that our customers can do to become involved in the solution.” 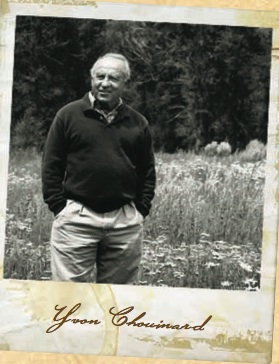 And while his name was well known in the climbing and outdoor communities, he was virtually unknown to many Americans—until a New Yorker magazine profile of Chouinard appeared in 1977.

Sales grew to $5 million by 1980, and in 1981, Patagonia and Chouinard Equipment were incorporated within Great Pacific Iron Works. 1982 saw the first printing of the Patagonia catalog and the rest is, for the sake of brevity, history.

12/08/15
Woody
Story Circles that can see this:
Outdoors - All Public
Primary Story Circle:
Our Newsletter