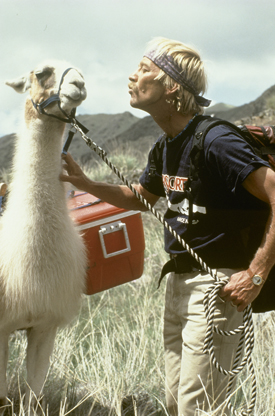 Growing up in Kansas, Skip Yowell was exposed to hunting, fishing, and camping at an early age by his family. Then there were summer vacations in Yellowstone National Park and the Canadian Rockies, and winter days on Kansas hills on barrel staves made into skis by his father.

“The summer after my freshman year in college,” Yowell said, “I worked in Estes Park, Colorado, and climbed Long’s Peak.” That event sparked an interest in the mountains, an interest that grew during ensuing summer vacations spent with his cousin Murray Pletz near Seattle.

“Murray majored in industrial engineering in college and had won an Alcoa award for an aluminum pack frame design. Since neither he nor I wanted to work in corporate America,. we decided to get into the frame-building business.”

In 1967, they took over the top floor of their uncle’s transmission shop in Seattle. “My aunt did the books and, to save money, I lived in the shop.”

At the same time, Pletz was going out with a woman named Jan Lewis who owned a sewing machine and was an excellent seamstress. “Murray proposed to her,” Yowell said with a laugh, “telling her that if she married him, he’d name our new company after her.” Thus, JanSport was born.

In 1970, with Jan sewing the pack bags, JanSport was selling small daypacks and ski packs with zippered compartments to the sport shop on the University of Washington campus. The shop’s manager, Ned Bergen, noticed a trend.

“Ned called me,” Yowell said, “and said that students were buying the packs to carry their books in, to protect them from the rainy Seattle weather.”

Yowell and Pletz added vinyl bottoms to their small daypacks, and sales grew not only at the University of Washington, but at college bookstores throughout the Northwest. It didn’t take long before they were selling the packs to college bookstores nationwide. Today, more than 5 million are sold annually via this channel of distribution.

A year after the beginning of the bookpack business, Yowell and Pletz attended Lou Whittaker’s first-ever winter mountaineering seminar on Mount Rainier. It was a record snow year, and they embarked on an epic, yet unsuccessful, summit bid.

JanSport was sold to K2 in 1972. But, even more importantly. it saw yet another epic winter outing become the genesis of a new product.

“Murray, Jan, myself, Gary Rose, Dave Chantler, Chuck Cross, and Ira Spring set off on a long winter ski tour. A huge storm hit, and the trip was a disaster. We went back the next weekend and during that ski, Murray and I concocted the idea for a dome tent—a tent that had plenty of room for people to sit around playing cards to weather out a storm.”

The initial run of the dome tent was sold to Dave Chantler at REI. They sold out quickly, and more were ordered. Demand eventually became so hot at REI and other retailers that the company’s Trail Dome, Mountain Dome, and Wedge dome tents were parceled out on a limited availability basis.

Things were humming along well at JanSport, but not so at K2, which sold off JanSport to Dan Spaulding’s Wisconsin-based Downers company. With limited capital, JanSport focused exclusively on packs. Then in 1984, Blue Bell/Wrangler purchased JanSport from Downers. In 1986, Blue Bell/Wrangler was bought out by VF Corp., which has owned JanSport ever since.

Preparing to celebrate JanSport’s 40th anniversary [2007], Yowell now serves as the company’s vice president of global public relations. He lives in Pleasanton, Calif., and gels outdoors as often as possible when not traveling. His life in the outdoor business is chronicled in his book, The Hippie Guide to Climbing the Corporate Ladder & Other Mountains.

Looking back, Yowell said, “It’s been an amazing ride. What a great industry, one that gives back and has so many great people involved in it.”

Here is the Master Index for Woody's Trailblazers series.

02/26/15
Woody
Story Circles that can see this:
Primary Story Circle:
Outdoors - All Public
Our Newsletter