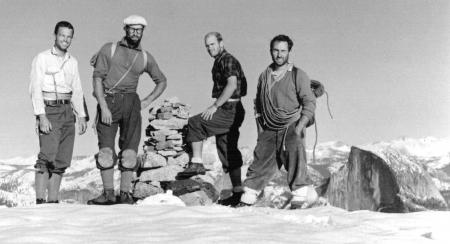 During a climbing career that would become the stuff of legend, Royal Robbins was being groomed to take over his father-in-law’s successful paint store business in Modesto, Calif. “But I always had problems with getting the mixtures right,” he said.

He really didn’t, as he remembered, have much interest in the business world at all. That is, until he and his wife, Liz, were in Switzerland in 1968 where they were introduced to the owner of the French boot-making company, Galibier. “The owner asked me to design a rock climbing shoe for the American market, and the R.R. Yosemite shoe was born.”

With its debut, Robbins took a  new  look  at  what being a businessman might be like. “I decided that if we have to get into business to make a living, it might as well be with something we liked and use the business to stay in touch with the outdoors.”

On returning from Europe, the couple collectively said, “Why not?” and jumped into the importing business. They not only brought in the R.R. Yosemite boots, but also Galibier’s hiking and mountaineering boots, as well as the company’s telemark ski boot, which set the standard for its day. Warehousing for all this product? Ironically, it was in the basement of the aforementioned paint store in Modesto. “As we moved along in the wholesale business, we decided to add more quality product, and soon we were importing German ropes, English helmets, artificial chocks and, eventually, English sweaters,” Robbins said.

The Robbins also decided to get into retail, opening their first retail mountain shop in Modesto in 1971. Not long afterward came another Robbins Mountain Shop, this one in Fresno, Calif.

Whether it was being more tuned into apparel via retail, or the success of their friends at Patagonia and Doug Tompkins at Esprit, or even something very simple like the import of the English sweaters, Liz Robbins got more interested in clothing. In 1974, she designed her first piece of apparel—the Billy Goat Shorts.

“They were an immediate success with outdoor shops and climbing shops across the country,” Robbins recalled of his wile’s creation, “and they served as the catalyst to start an entire clothing line.”

The Robbins’ attitude regarding clothing was, “Let’s go for it. We knew going in that it was make or break with clothing, but then it was all ours and not somebody else’s goods we were selling.”

In the early 1980s, Robbins dropped its hardgoods business entirely to focus on apparel. In 1991, the Robbins’ sold 51 percent of the company, and in 1993 sold the remaining 49 percent.

“The ‘70s were particularly heady times,” Robbins said. “Everyone in the outdoor business did so well. Almost any new product or product idea was well-received by consumers.”