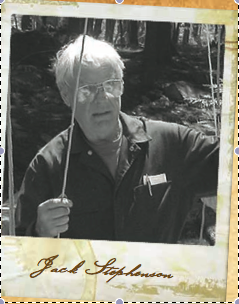 That turn of retailing genius brings to mind the genius of another type. That of Jack Stephenson, the man many consider the most creative of the early outdoor equip­ment designers and manufacturers.

Also a former aircraft industry engineer (Hughes in California), Stephenson, like many of his future gear-making colleagues, got his start making gear in the mid-50s because he didn’t like what was on the market.

“Instead of quitting backpacking because of the miserable gear, I took the sewing skills my mother taught me to repair my sailboat sails, got some spin­naker fabric, and started to work on a pack,” he said.

Later, his first attempt at making a sleeping bag so impressed a fellow Hughes employee that he asked to buy it. Stephenson was soon soliciting orders from other employees and friends.

“That was in 1957 when I found myself in business,” Stephenson said. His next project belied his uncanny ability to create outside the given design norms of the day. The product was the Jackpack, a back­pack with an aluminum pack box.

The Jackpack led to other creations all made under Stephenson’s Warmlite company name. Among his products were several results of forays into perfecting the vapor barrier principle for outdoor gear.

“I discussed the principle with the people at Hughes for years because I had trouble keeping my hands and feet warm when I went skiing. I first used a plastic wrap under my gloves and socks, and later switched to baggies, bread bags and those molded plastic socks you wear over your feet when you paint,” he said.

“We had so much luck with the feet and hands that I decided to try other things. A sleeping bag was tops on the list because I’d go to bed cold, close up my down bag and wake up in the middle of the night soaking with perspiration and stuck in a wet bag the rest of the night,” he added.

Stephenson’s Warmlite products were sold via mail order from his rural home/production facility in New Hampshire. And, like everything else he did, his catalogs ran counter to the norm in that they featured photos of his “naturist” family using Warmlite gear in the buff —an inspiration to many future outdoor adventurers who, as teens, undoubtedly treated Warmlite catalogs with much the same reverence as Playboy magazine.