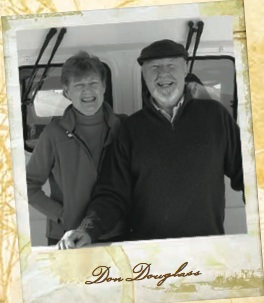 As a graduate student in business economics at California’s Claremont Graduate University in 1970, Don Douglass’ thesis analyzed REI’s mail-order business model. In his analysis, he found two things that intrigued him: “First, was the fact that their largest base of customers was in Southern California,’’ he said. “Second, was the fact that people who bought from REI would prefer to try on gear, especially packs and boots before buying it.”

With his findings and MBA in hand, Douglass raised the capital to start Wilderness Group Inc. (WGI) in 1970, and then opened The Backpackers Shop in Claremont, Calif. Later, he opened two more Southern California stores, one in Santa Ana and one in Pasadena.

Apart from retail, WGI started a pack company called Alpenlite. “Dick Kelty couldn’t open more dealers because he couldn’t build packs fast enough,” Douglass recalled. “So I said, ‘Hell, we can build a great pack,’ and we did.”

Around the same time, the first urethane-coated nylon fabric came onto the market and Alpenlite ended up using it in all its pack bags. But it wasn’t the waterproofness that made Alpenlite backpacks famous. It was the hip belts. “We used big, padded waist belts, and the company slogan was: ‘Let your hips shoulder your load.’ “

Alpenlite packs were hot sellers in the ‘70s. At one point, kit maker Frostline alone was selling thousands of Alpenlite backpacks in kit form, and Sierra Designs created a special pack bag for the Alpenlite pack frames it sold at its retail shops.

With the retail and the manufac­turing businesses humming along, Douglass announced to his partners that if sales reached $1 million, he and his wife, Reanne, would take a leave of absence and sail around the world. The partners chuckled, but within two years of starting WGI, sales hit the $1 million mark, the couple purchased a 42-foot sail­boat, and they were off.

Their voyage started well, but 800 miles west-northwest of Cape Horn, the boat was overturned by a giant wave. When nothing was heard from the couple, they were presumed dead. But 42 days later, they arrived on the southern coast of Chile, both they and their boat badly battered.

Despite the harrowing experience, their voyage was aborted not so much because of the sailing conditions but because Douglass had to come back to take over WGI, which was strug­gling under a temporary CEO’s leadership. “I came back and immediately got the company (now all of it officially under the Alpenlite name) into book bags, which were a huge hit for us, and then into bicycle touring bags under the Kangaroo label.”

Not one to stand still, Douglass loved any new challenge and started exploring other endeavors. While Alpenlite moved along, the Douglasses decided  to write a book about their fateful sailing journey, each offering an individual point of view. Rather than bow to publisher pressure for a macho-driven  tale,  the couple formed their own publishing company  and printed “Cape Horn: One Man’s Dream, One Woman’s Nightmare.”

Busy and interested in so many diverse outdoor recreation opportunities and with a growing publishing business, Douglass retired from the outdoor business in the mid-1980s. He and Reanne then moved to the Sierra where he set the still-standing record for running the Muir Trail from Whitney Portal to the Yosemite Valley in an elapsed time of 118 hours. That feat led to Douglass designing and making ultralight gear.

Eventually, the Douglasses were drawn back to the sea. These days, they live in Anacortes on Fidalgo Island near Washington State’s San Juan Islands. Their first book led to many more about sailing and places to anchor a boat, such as "Exploring the Gulf of Alaska." Here is their fascinating website: www.insidepassagenews.com

And if that’s not enough, they’ve established The Friends of The Inland Passage, a non- profit dedicated to ensuring public access to the waters of the Pacific Northwest.

AlanTabor
Offline
Joined: 03/23/12
Agreed. I've got an old Kelty
Agreed. I've got an old Kelty that's the same. It's all an interesting design challenge to balance durability, weight, ease of use, etc. Who knows what direction it might head in the future. The pack I really mourn losing was one we built in my early Boy Scout days. We had catalogs showing the new-fangled Keltys but couldn't afford them so we took aluminum electrical conduit and a bender tool, built the external frame, and strapped our canvas packs to it. It worked pretty darn well!
Top
Jul-17-2018
#3
George Morgan (not verified)
I'm going on a week-long trip
I'm going on a week-long trip on the Pacific Crest Trail starting July 18. I'm still using the free-standing back-loading Alpenlite I bought back in 1975. Greatest backpack ever made.
Top
Aug-05-2019
(Reply to #3) #4
Jim Allen (not verified)
Where did you buy your pack?
Where did you buy your pack?
Top
Nov-27-2018
#5

AlanTabor
Offline
Joined: 03/23/12
I asked George for photos of
I asked George for photos of his pack. Here they are with both George and Pack looking good! https://www.outinunder.com/content/george-morgans-alpenlite-pack-0
Top
Feb-20-2019
#6
Victoria Lyons (not verified)
George is right, Alpenlite is
George is right, Alpenlite is the best pack ever created. I, too, bought an Alpenlite in 1975. I had been working as a Clerk/Typist for the US Forest Service on the Kings River Ranger District, but that wasn't nearly enough wilderness for me, so I nagged the trail crew boss into putting me on the trail crew, and I became the first female wilderness ranger in the Sierra National Forest. I went to an outdoor gear store in Fresno, CA looking for a Kelty, because my best friend had one she truly loved, but the clerk sold me on the free-standing Alpenlite with the marvelous hip belt. Sadly, my Alpenlite was stolen back in 1996. It was in mint condition, even though I had used it the entire time I was with the USFS, backpacked in all seasons, and even used it to walk across country with The Great Peace March for Nuclear Disarmament in 1986. I haven't bought another pack since. I truly miss it and still look for another one (new or used) online, which is how I came across this website.
Top
Sep-03-2019
(Reply to #6) #7
Mark (not verified)
I have an Alpenlite Sierra
I have an Alpenlite Sierra Design backpack on a large aluminum frame (with waist belt) that needs a new home. The zippers are worn on 2 side pockets, but it's otherwise in good condition. It was purchased in 1972 and used fewer than 10 times.
Top
Nov-27-2019
(Reply to #7) #8
Brian Sherman (not verified)
Mark if you are still looking
Mark if you are still looking for a new home for that pack I am interested. Could you post some pictures?
Top
Apr-30-2019
#9
John Wessels (not verified)
I have the Universal Brand
I have the Universal Brand backpack that is the same as the Alpenlite. Freestanding, carries large amounts of stuff, best riding pack ever due to load on outside of hips instead of the lower back. Love this design.
Top
Apr-12-2020
#10
Jim Horak (not verified)
I had always wanted an
I had always wanted an Alpenlite frame and pack bag as a teen in the early 70's, cost was a major factor at that time. In May "19" I spotted one at a community yard sale in Chicago and said to myself that "if the price is not too much...". The owner told me that it had only been used once during a three week trip to Mexico in the late 70's and no one passing by had known what it was. He asked me what I was going to do with it, my reply was "put it back in to use". He discounted the $7.00 marked price to $5.00. Christmas came came early last year ! If Covid becomes less of problem in late June "20" the pack goes with me to Philmont Scout Ranch as a major hike with my scout troop. Just beautiful workmanship and engineering as nice as anything currently made.
Top

08/25/14
Woody
Story Circles that can see this:
Outdoors - All Public
Primary Story Circle:
Our Newsletter