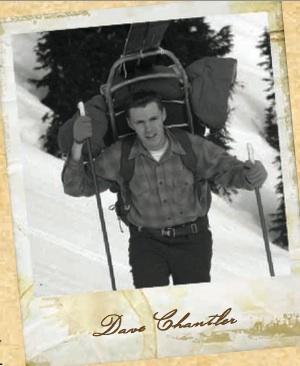 A common thread that runs through many of the outdoor trailblazers’ personal histories is the importance of the Boy Scouts. And so it is with Seattle native Dave Chantler, who became one of REI’s first employees.

“My scoutmaster, Andy Nelson, first took us climbing, and that got me interested in the outdoors and outdoor sports,” he said.

Chantler’s interest in climbing continued while attending West Seattle High School, where he was a few years behind the school’s most famous graduates, and climbers, the Whittaker twins. Ironically, he would go on to work with Jim Whittaker several years later. {See Trailblazer profile of Jim here]

But first Chantler worked his way through Seattle Pacific College by holding down part-time retail jobs. During those years, he shopped at REI, and on graduating in 1962, he applied for a job.

“Jim Whittaker was heading off on the Mount Everest expedition and they needed another person,” Chantler recalled. He got the job and soon was at work with Gary Rose, part-timer Chuck Hazelton, and one other full-lime employee at 610 Pike Street, right above the Green Apple Pie restaurant with The Mountaineers club room just down the hall.

In May 1963, Chantler was drafted into the U.S. Army, and while on duty at California’s Fort Ord, read that Whittaker had reached Everest’s summit. “When I got out of the Army in 1965, I went right back to work at REI, now in a new store on 11th Street. There, I started buying under (REI founder) Lloyd Anderson’s careful watch. I bought all the ‘foreign’ goods while Gary Rose bought all ‘domestic’ goods,” he noted.

Foreign goods meant everything from Sigg pots to Edelrid ropes and Raichle boots. Eventually, skis were added to the mix, and they became the hallmark of Chantler’s buying effort for REI over the years.

“Lloyd and Mary Anderson were on a vacation/buying trip one year in Finland and were at Suunto when someone in that meeting mentioned that a cross-country ski maker down the road was selling lots of skis to a mail-order company in Maine,” Chantler said. “That got Lloyd’s attention, and he came home with some cross-country skis, boots, bindings, and poles. I took one look at the gear—and told Lloyd I was interested in pursuing the category. “’So I brought in some cross-county gear and it sold through. That winter, I tried the sport myself and loved it. So for the next selling season, I added another ski brand and another boot brand, upped my orders with the original brands we’d sold the first year, and we sold everything,” he added. “The third season, I went to the Norwegian, Finnish and Swedish trade councils in Seattle and got the addresses of every cross-country ski gear maker in Scandinavia. Then I wrote them all letters to see if they wanted to do business with us. That led to me bringing in more lines.”

During the third and fourth seasons of selling cross-country ski gear, sales tripled. Eight pages of valuable catalog space were now devoted to the category, and Chantler was pressed into service to offer REI’s first cross-country ski clinic. “I think about 250 people showed up, and that clinic led to bus tours and all sorts of promotional events.” Along the way, Chantler became known to cross-country gear suppliers as “The Grand Poobah,” a nickname given to him by then-Karhu marketing man Steve Gladstone that stuck. Afterall, REI, with Chantler as buyer, had become the major force in cross-country retail sales in the United States.

Later in his 38-year career at REI, Chantler would also become the retailer’s bike buyer.

Buying was always his passion. “I had no interest in people management, but a huge interest in product.” And cross-county skis were his first love. “Skis always fascinated me and they still do.”

dougp
Offline
Joined: 07/06/12
Skip Yowell told this
Skip Yowell told this anecdote about selling Dave on JanSport's dome tent, in his "Hippie Guide to Climbing the Corporate Ladder and other Mountains": At that point, we assured Dave that this, like all JanSport products, had been heavily field-tested and was as rugged as hell. After all, hell is basically what we had to go through to learn how 30 make the Trail Dome tent. Maybe Dave felt sorry for us after our prototype A-frame tent attempted to kill us the year before, although I’d like to think he was more of a visionary. Whatever the reality, Dave gave us a shot ay buying the first 50 JanSport dome tents for his store. Guess what? They blew out the door without any advertising. Murray, Ian, and I were elated. Dave ordered more, and more, and more.
Top
Apr-20-2015
#2

dougp
Offline
Joined: 07/06/12
Legend has it that Dave
Legend has it that Dave Chantler, the line’s creator, named Novara after an especially tasty bottle of Italian red wine from a village in north-central Italy. Manufactured in Japan, Novara gear is beautifully crafted and exclusive to REI. All models contain special features, such as chrome-moly frames for reduced weight and durability. from Chelsey Beck's Prezi on REI and Dave's role in promoting bikes.
Top