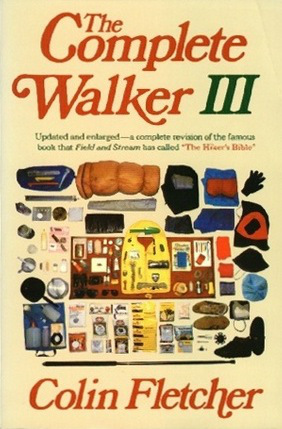 It's never been documented whether or not those Warmlite catalogs inspired other "naturists” to go naked into the backcountry, but it’s well known that writer  Colin Fletcher’s books inspired thousands of people to get out into the wilds with a pack on their backs.

In the early 1960s, Fletcher started off on a solo backpacking trip from the Mexican border to the Oregon border along California’s eastern flank. His adven­ture was serialized by the San Francisco Chronicle and became the subject of his 1964 book “The Thousand Mile Summer.”

Readers marveled not only at Fletcher’s intrepid nature in going it alone, but also in how he did it carrying only 55 pounds and 1 ounce of gear, without water, all of which was lovingly displayed in a two-page photo spread in the book.

Adding some spice to the story was Fletcher’s background: A former British Army commando, the knockabout Welshman had been a hotel manager, a farmer in Kenya, and a road builder in Rhodesia before catching a cattle boat to the United States. On arriving in New York, he hitchhiked across the country, ending up in British Columbia, Canada, spending a mere $10 to make the trip. He prospected for gold in British Columbia before moving to the San Francisco Bay area, where he became a writer.

Fletcher followed up “The Thousand Mile Summer”  with  “The  Man  Who Walked Through Time” in 1968. It chronicled his extended 1963 hike through the Grand Canyon.

His last major work, “The Complete Walker,” became a hiker’s and back­packer’s bible.

So with good reading matter and plenty of great gear and apparel to make any outdoor adventure more enticing, a generation of outdoor enthusiasts ventured into the backcountry. They, like later generations, owe a debt of grati­tude to the trailblazers who had the foresight to know that the gear and apparel they created and sold would help make outdoor recreation an integral part of the American way of life.

There must have been something in the air during the Pioneers Project because another pioneer to be profiled-author Colin Fletcher (“The Thousand Mile Summer”and “The Man who Walked Through Time”- also refused to be interviewed. (See the Postcript on Dick Kelty for the first.)

I improvised and shipped him the final copy which he replied was "accurate and fair.” So we (Malden Mills and Outdoor Retailer ) invited him to a Pioneers fete at the August OR show in Reno.

To this request, he replied in a letter dated May 21, 1991: “I’m certainly honored that you should ask me to Reno. But to be honest, I feel (as you correctly  divined in the penultimate  paragraph of your letter-might be the case) that this is probably  “not for me”. I’m really not much  of a person for public appearances -except on very rare occasions. I gather that I have earned a reputation as something of a curmudgeon in such matters-and others. Well, so be it. Good protection anyway.”

05/07/17
Woody
Story Circles that can see this:
Outdoors - All Public
Primary Story Circle:
Our Newsletter

Buckskin to Gore-Tex: The Outdoor Industry in American History