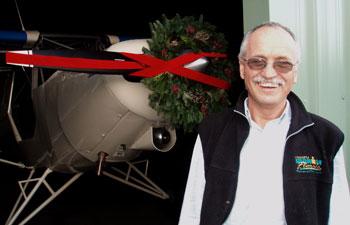 Two weeks prior to his graduation from the University of Washington in 1968, Bill Nicolai said he dropped out, thinking, "If I didn't graduate, I'd avoid becoming a businessman and, therefore, live an unconventional life.”

Free of academia, Nicolai headed to Yosemite to climb. "I was very engaged in climbing, first on rock and later in alpine mountaineering.”

It was on one of Nicolai's alpine climbing adventures-a 1971 traverse of the Picket Range in Washington's North Cascades National Park-that his life changed forever.

“My climbing partner and I had an A-frame tent that disintegrated on us in a had storm and we nearly perished,” Nicolai said. "I was unemployed at the time, and after that misadventure, I decided to make an expedition tent that would withstand extreme conditions."

Nicolai created the doubledwalled Omnipotent, which led to him founding Early Winters in 1972. His partner in his new business venture was Ron Zimmerman, a graduate from the University of Washington who had a degree in English and was interested in graphic design and writing copy.

“Ron urged me to get into catalog sales and direct mail. In 1974, he created a brochure that we handed out to people at the street fairs where we displayed and sold our tents." 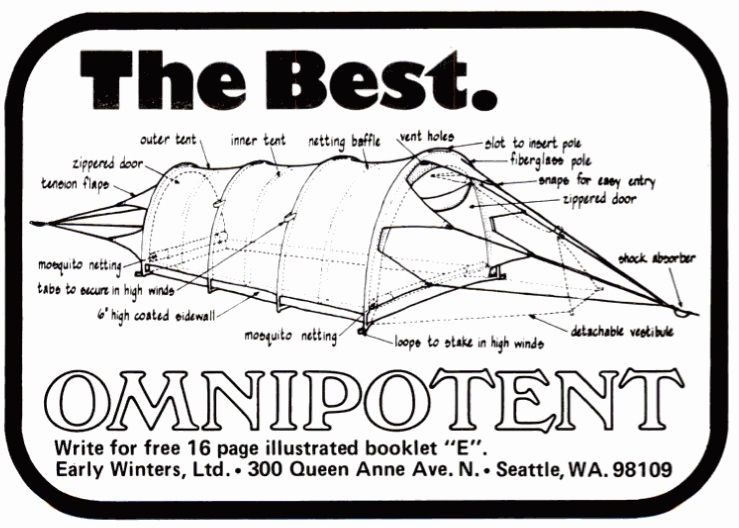 Early Winters' big break came a year later when Nicolai met with W.L. Gore and Associates salesperson Joe Tanner. "No one in outdoor seemed very interested in Gore-Tex fabrics at the time, but I'd done some research on semi-permeable membranes and was intrigued. So I got some fabric and made up a tent and it proved to be a winner," Nicolai said.

The tent laid the foundation for a whole line of Gore-Tex items and the first "real" Early Winters catalog in 1976 showing Gore-Tex sleeping bag covers, gaiters, parkas and tents. “Our sales grew exponentially from $75,000 to $250,000 to a million over the ensuing years," Nicolai remembered.

The Early Winters catalogs gained a loyal following because they were, in Nicolai's words, "whimsical, fun and irreverent."

By 1984, Early Winters' annual sales were $16 million and the company employed 200 people. "It was so ironic," Nicolai said with a laugh, “for a guy who had always considered being in business as such a bad thing."

That year, Nicolai sold Early Winters to Orvis, which in tum would sell the company to the White Group, which would sell it to the present-day owner, Norm Thompson.

Nicolai helped transition Early Winters to Orvis, and then set out on his own with Nicolai and Associates consulting. He worked with mail-order companies, like j. Peterman and Smith and Hawken. In 1992, he formed the Good Catalog Company, which he sold, after ramping sales up to $25 million, to Readers Digest in 1999. Today, he is a consultant with Lenser Multi Channel Marketing.

Aside from consulting, Nicolai became a born-again jock several years ago, focusing his energies into marathon running, Ironman triathlons and endurance bike racing. Today, he said he is now "in the best shape of my life and loving it.”