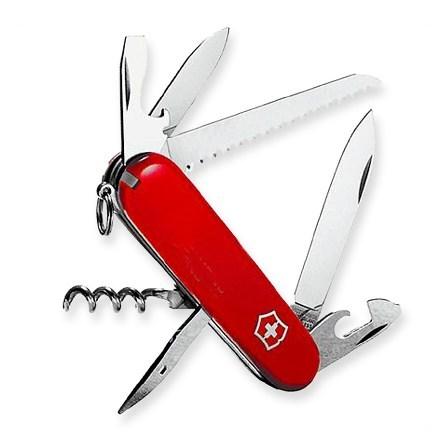 One of the regular, and most persistent, sales reps who called on SD retail in the mid-seventies was John Zyla, a slightly overweight grumpy guy with a thick accent who, we SDers assumed, looked down his nose at us as nothing more than hippies trying to do retail and doing it badly.

Zyla’s one and only product was Swiss army knives. Not just any old Swiss army knife brand but the original, Victorinox (Victori for the multi-implement knife creator’s wife Victoria and Nox the Latin for steel-for those who are keeping score) brand.

At SD, we sold maybe 20 Victorinox knives per month and Zyla was under pressure to sell more in his NorCal territory. Would we, he begged, run a
promotion.

O.k, but which model to promote out of the dozens in the line? We chose the “Camper” with it’s seven implements (big blade, can opener, scissors, a corkscrew etc, plus tweezers and tooth pick tucked into the knife’s shell).

O.k so how to promote? I begged off a final decision on how to and how many until I met with San Francisco ad agency owner Steve Hall. Together Hall and I came up with the ad headline: “Join The Swiss Army” to lay above an artist’s rendition of the “Camper”. Below the knife rendition were general details and price.

But where to place the small, clean ad? Hall came up with a list of magazines and newspapers. I posited the idea that males would be the primary customers for the knife and a lot of Bay Area males read the Chronicle’s famed Sporting Green sporting goods section daily.

Hall’s team created the ad. Zyla thought it stupid but said he’d inventory 250 knives to cover the month the ad would run.

The ad ran and we sold the 250 knives in five days. Zyla had a shipment of 500 more air shipped from the importer’s (Forschner) facility in Connecticut. The knives came and they sold out and air shipments kept coming and coming.

The promotion caught the attention of Victorinox execs and helped Zyla catapult from rep to U.S. national sales manager and, a very less grumpy, in fact a most happy fellow.

After I left SD for the world of freelance uncertainty Zyla employed me to write and photograph several Victorinox catalogs. That and he give me knives upon knives including favorites like the NATO standard issue soldier’s model. The small Ronald Reagan signature ones given to Whitehouse guests and a rare silver, not red, “Camper”.

Join the Swiss Army! One of the regular, and most persistent, sales reps who called on SD retail in... Read Story
City Lights? Flash Lights? Beat it.

Another Tale From Retail One of favorite, and loyal, SD retail customers was poet Gary Snyder. And... Read Story