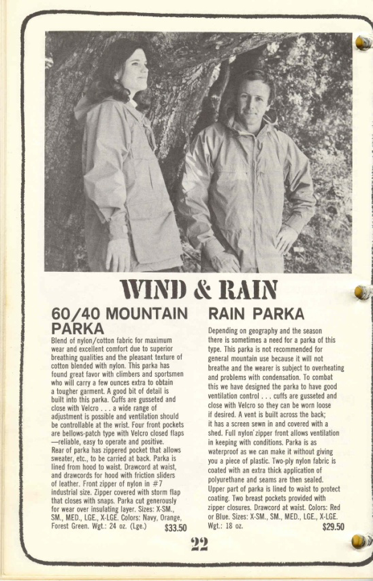 Author George R. Marks was co-founder of Sierra Designs in 1965

Bob Swanson, (1933-2016) , my co-founder of Sierra Designs and later of The Walrus Tent Company, more than anyone else remains in my mind as the greatest innovator and contributor of outdoor products to the industry. With his passing in August of 2016, he shall be remembered for his abundant legacy among which is the Sierra Designs 60/40 Mountain Parka.

Bob’s career spanned more than fifty years. Starting with a brief time spent in Colorado with Alice and LeRoy Holubar (1). He then moved west to Berkeley California, where he took a job at The Ski Hut working for Allen Steck (2) manager and George Rudolf the owner (3). During his tenure he became experienced in catalog sales and to a large degree marketing, both of which he was able to expand upon after we began our company in October of 1965. He was also an active outdoor person and small boat sailor.

For the first six months we worked like maniacs developing one product after the other. This included a full line of sleeping bags, tents, packs, garments and a range of small accessories. Our first mountain parka was one for wind and rain as suggested by Doug Tompkins who was our first retail client (The North Face), using a fabric called Reevair which was supposed to breathe, something like Gortex to come, but not effective at all.

As best I recall, we received a bit later a visit from two representatives from the Arthur Kahn Company, Thor Gustafson, (1916-2015) vice president of the company and the young John Murphy (4) who is still active in the textile business today. As we were going through the sample swatches, Bob picked out almost at once the fabric they designated as one of 62% nylon and 38% cotton (or perhaps the reversed). He ordered some right away and later when he was writing the text for the catalog he rounded the numbers off to 60/40 and thus was born the name which continues to this day. The design construction of the fabric was actually done by John Murphy as was confirmed years later when I asked him about it.

By 1968 both 60/40 and Reevair parkas were in the catalog. However after a while it became clear that Reevair was just not working so it was dropped from the line. By the time we had relocated to Berkeley from Point Richmond, it was the  leading sales  garment in our line.

On one occasion we attended the National Sporting Goods Show in Chicago (Pre OR days) where we  had taken a booth. On a brilliant suggestion from Bob, in the morning of each day of the show we arrived in force, all of the SD staff as well as the sales representatives dressed in orange 60/40 Mountain Parkas. It was pure theater and had a major impact on the attendees of the show, especially the buyers of all of the specialty retailers. The competition (mainly The North Face) were left with their jaws dropping as we marched in. You might ask Mark Erickson as I think I remember years later he told me of their reaction to this clever stun

In time the sales for the parka just kept going up and up. 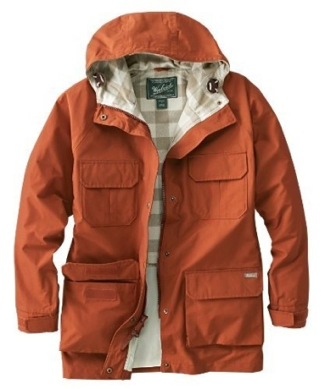 With this success came the inevitable knock-offs. Leading them was one of the major garment companies, Woolrich (6).

To counter this shameless action by a company that really did not need this garment, having been so successful in their own right for more than 100 years,  Bob designed a special lable for the parka, The Original 60/40. Those who were gear enthusiasts would have no other. There were others most of which can be seen if you go to Google and type in the key words, Sierra Designs 60/40 Mountain Parka or add Japan and the results are many.It seems the Japanese have embraced this garment ever since it appeared. They have also made many variations of the styling, much of which leaves a lot to be desired. 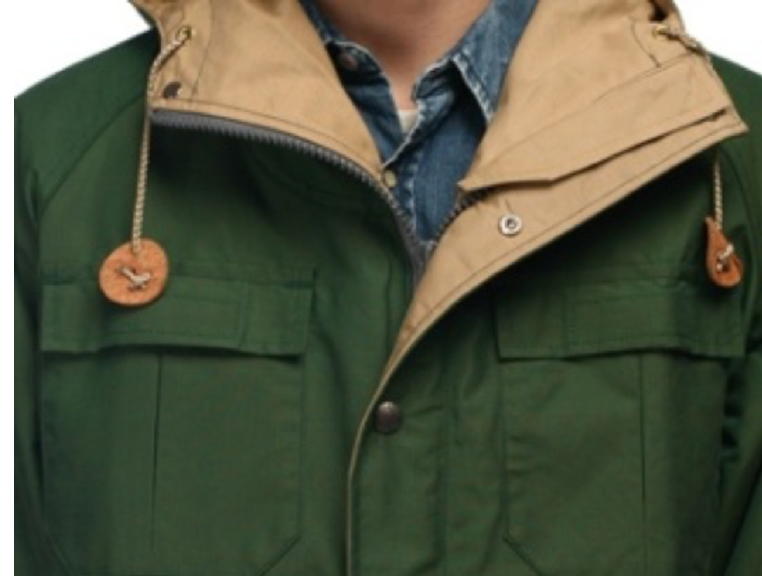 One of the features is a small flap at the top of the zipper. One day the sales manager told me of some complaints about the slider coming up to the chin and it was very cold. It took me about ten minutes to design this little flap and it solved the problem right away. To my astonishment this detail seems to appear in countless garments of all sizes, colors and prices throughout the garment industry up to and including to the present day.

As the years passed the garment was often seen being worn by celebraties, such as Robert DeNiro in The Deer Hunter, and Carl Sagan the cosmologist.

I even found one group of motorcyclists who use it as their uniform.

By 1983 Bob had left the company, disenchanted with the new owners, The CML Group. He spent a short time working with Bob Gilles in his company Shelter Systems. (5) 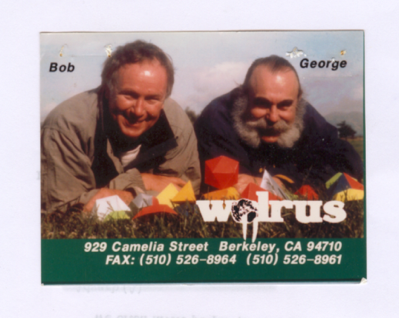 But he became dissatisfied so as soon as he heard that I was leaving SD in late 1984 he asked me to join him in a new venture called Walrus Tents. We worked together for the next 13 years until the company was acquired by REI in Seattle. Bob moved along with all of the assets of the company to REI and stayed with them until the line was sold to MSR. After that the brand Walrus had just about dissapeared. Remarkably one can still find Walrus Tents being traded on eBay all the time.

It was at that time he left to take a position of design consultant for Big Agnes, where he spent the last ten years of his professional life 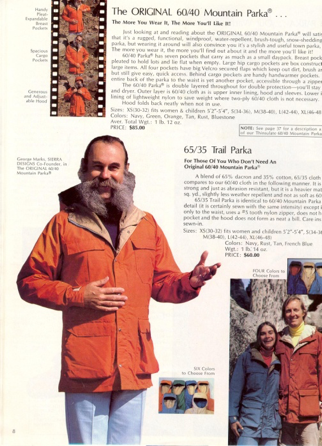 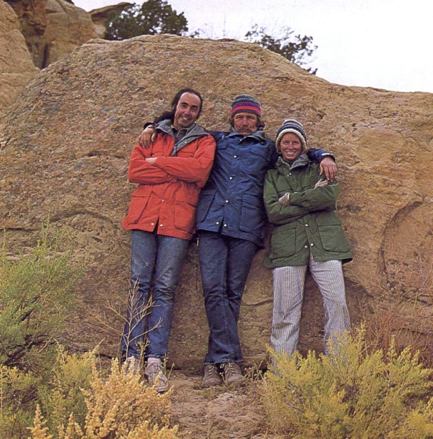 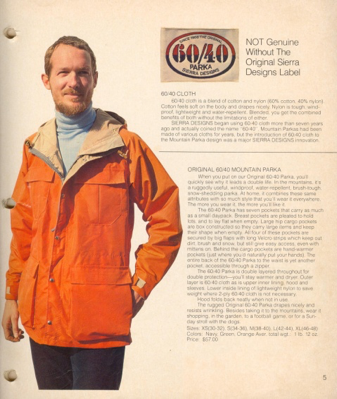 Index: Results of research on Google.

Woolrich, Inc. is a United States clothing company based in Pennsylvania since 1830. Woolrich, Inc., founded in 1830 by John Rich and Daniel McCormick, is the oldest manufacturer of outdoor wear in the United States. The company was founded for the purpose of manufacturing fabric for the wives of hunters, loggers and trappers. Later, the company also outfitted clothing supplies to the American Civil War and Richard E. Byrd's 1939–1940 Antarctic expedition.

The creation of Sierra Designs was an act of friendship and encouragement from David Buschman. Bob... Read Story
A Review of Product Development for Sierra Designs

Starting Out After getting the business set up in October of 1965, and renting a building in Point... Read Story
The Story of the Sierra Designs 60/40 Mountain Parka

AlanTabor
Offline
Joined: 03/23/12
When I started working at SD
When I started working in the SD warehouse in late '76, I spent a significant amount of time handling 60/40 fabric clothing. There was, of course, the 60/40 Parka in Mens and Womens, a Vest, a down parka in both Men's (Inyo) and Women's (Crystal) and the Tartan with a wool lining. Our Japanese distributor Okura was ordering thousands of these coats and we had to stage them into container size lots marked out with masking tape on the warehouse floor. There were a few predominant colors: Navy, Green, Tan, a lighter blue popular in the Crystal, and (in much smaller numbers) Orange. The warehouse looked like Cristo tutti frutti 60/40 fence.
Top
Jun-02-2017
#2
Matthew Parrott (not verified)
Have Sierra Designs stopped
Have Sierra Designs stopped making the 60/40 Mountain Parka? It does not appear on their website, and can't find anything but vintage versions everywhere else. Any info guys?
Top
Jun-02-2017
(Reply to #2) #3

admin
Offline
Joined: 02/22/12
George wrote this originally
George wrote this originally for one of the Sierra Designs marketing guys because they planned to do a group of products in the original 60/40 fabric. He then republished on OutInUnder. I poked around a bit when he sent the story and it did look they had some sort of updated 60/40 Parka plus a few other garments in the same fabric. If you're seeing something different it might be the difference between a winter and a summer catalog? You'd have to ask them directly to be sure.
Top
Dec-10-2018
#4
Cheri Kraemer (not verified)
I have a 60/40 Parka from
I have a 60/40 Parka from 1973 and still use it! My dad lived in Pt. Richmond and bought it for me while I was living in Colorado. I am sure he knew George and Bob. Also have a back pack too. Wore out the straps and they replaced it for free in Berkeley. Lifetime guarantee. Love my parka 45 years later and will keep it for the rest of my life. My children even wore it when it was time to feed horses in the winter. It is lovingly named the 'ranch jacket'.
Top
May-14-2020
#5
Michael Aronson (not verified)
I had an outerwear apparel
I had an outerwear apparel company in Montreal from 1978 -1984 and we used exclusively the Ramar 60/40 fabric from Arthur Kahn. Eddie Bauer back then carried our anorak shells under our brand name. I loved and still do to this day the 60/40 cloth.
Top
Jun-04-2021
#6
David Jensen (not verified)
Bought mine (orange) in 1969.
Bought mine (orange) in 1969.
Top
Jan-09-2022
#7
Jim Huffaker (not verified)
Orange 60/40 parka, 30 years
Orange 60/40 parka, 30 years FD/EMS, 10 SAR, RN at a Trauma Center in da Bronx. Thanks for the memories! I'll go to my grave advocating for this parka. I had one back in the 70's, wore it to dust, still say it is the perfect design for day to day EMS/wilderness stuff. It's not waterproof but is wind proof enough that with appropriate layers beneath that don't mind wet, GTG. The hood fits over a climbing helmet. Pockets store stuff, Bomb proof enough for most things. Only change I would maybe make is to change the fabric to Nomex or PBI, it isn't designed to take the place of FD turnouts, but for impromptu encounters, it shouldn't support combustion or melt. Still and all, a great product that I wish was still produced, in ORANGE. Regards, Jim
Top
May-14-2022
#8
Grayal Farr (not verified)
I was transferred from the
I was transferred from the Army Ranger Camp in Florida to Fort Lewis, Washington, in late 1979. Right away I noticed that lots of people seemed to be wearing the same jacket; it didn't take me long to buy a tan one for myself. There are already plenty of other accurate comments about durability and utility in various conditions over a little judicious layering. My own favorite was (and remains) a Bugaboo down vest. I also had a couple of hard-used damages which SD repaired quickly and unnoticeably. Back east people in the 80s would stop me in businesses or even once on the street to ask where I'd gotten that jacket. Several guys who worked for me in Virginia also bought them. A young Asian woman I knew who'd spent time in the PNW before first visiting the east was astonished to find that "everybody (In Virginia) didn't wear those blue (which seemed to be the women's favorite) jackets."
Top
Nov-13-2022
#9
Vance (not verified)
Fell in love with this jacket
Fell in love with this jacket after seeing Sagan where it on Cosmos. It will always be my favorite.
Top