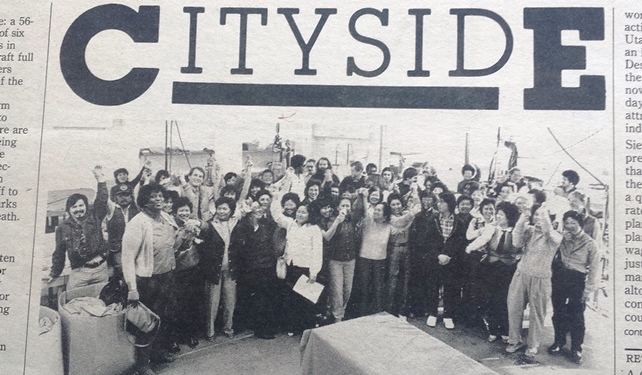 On December 12th, 1984, Alan Botsford for Sierra Designs management and the negotiating group of the Sierra Designs Workers Union, led by SDWU President Betty Chisolm, came to an agreement ending a dispute that began when SD announced plant closure layoffs 3 months earlier.  Discussion of the plant closure and boycott that followed can be found here and here on the site. 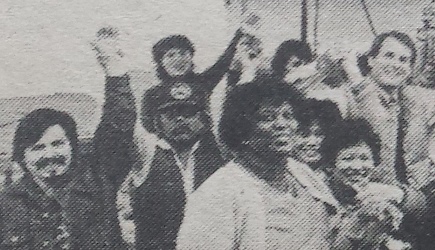 The agreement they signed follows below and is worth a quick scan. Key points were an improved severance package and the creation of a big blow out sale to benefit the workers. My favorite part? The language:

In the spirit of renewed UNITY, HARMONY, BROTHERHOOD, PEACE ON EARTH and the celebration of a coming new year by all of our races, religions, and nationalities, the workers whole-heartedly endorse the Sierra Desings plan for a GIGANTIC JANUARY COAT SALE EXTRAVAGANZA,  and pledge to do all in our power to make this an overwhelming success. 10% of the gross sales will go to the workers. 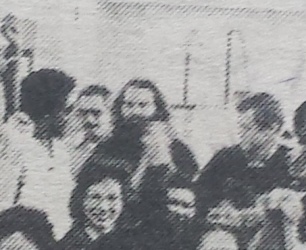 Now is that Berkeley or what?

One addition not mentioned but added shortly thereafter was an agreement to fund a feasibility study for a new, worker owned manufacturing business that some of the workers planned to set up (more on that next). I've added at the end a summary created by the Sierra Designs Workers Union shortly after the initial agreement that makes that clear.

My perspective: what could have easily been a lose-lose scenario turned into as much of a win-win as could be expected given the plant closure. Both sides went outside the box in their willingness to negotiate and come up with creative solutions. This happened against the advice of an anti-union law firm that was strongly advising against negotiation with SDWU, the group represnting the workers, and urged making deals individual by individual in classic union-busting style. Kudos to the SD workers for standing up and driving a process that led to this resolution. Kudos to Alan Botsford for trusting his instincts rather than the lawyers at a critical point in the battle. 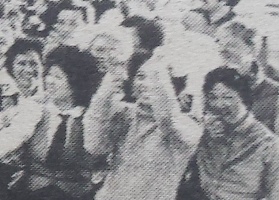 Probably the best article on the events was Happy Endings at Sierra Designs by Paul Rauber in the East Bay Express. If you're interested in a blow by blow and much of the background, I can't improve on his reporting. Quoting him:
And so all ends well. Sierra Designs is pleased: the boycott has been called off, as has the perjury hearing before the NLRB, and they are finally able to get out of the manufacturing business. The workers are happy, although they would have been happier if things simply remained as they are. “It’s better than not having a job,” laughs Chisolm; her co-workers smile wanly. The Plant Closures Project people are exuberant. “This is the first time we’ve been involved in a plant closure struggle that’s concretely resulted in jobs being saved locally,” beams co-coordinator Gilbrecht. She credits community pressure, the boycott, and above all the determination of the Sierra Designs workers with the successful resolution to the shutdown. “These workers are totally involved in this process, and were seriously committed to saving their jobs,” she says. “They’re just exceptional folks.”
The only loser in this little holiday drama is Littler Mendelson Fastiff and Tichy. With good will and good faith on all sides, a mutually satisfactory compromise was reached, and while everyone else is feasting on Christmas pudding, the San Francisco lawyers are left to their cold misers’ gruel.

(Pictured above: I wish I could remember the names of everyone I worked with back in the early 80's. I clipped out a few images where I could remember some. In image one: Betty Tatum and Alan Botsford. In the second small image: Tony Allen, Alan ?, Mrs Huey, Lynn Ferrin, Steve Langmaid. Image three: Gail Ross.)

Here's the original signed document. (I could use some help with Patricia and Julie's last names if anyone has them.) 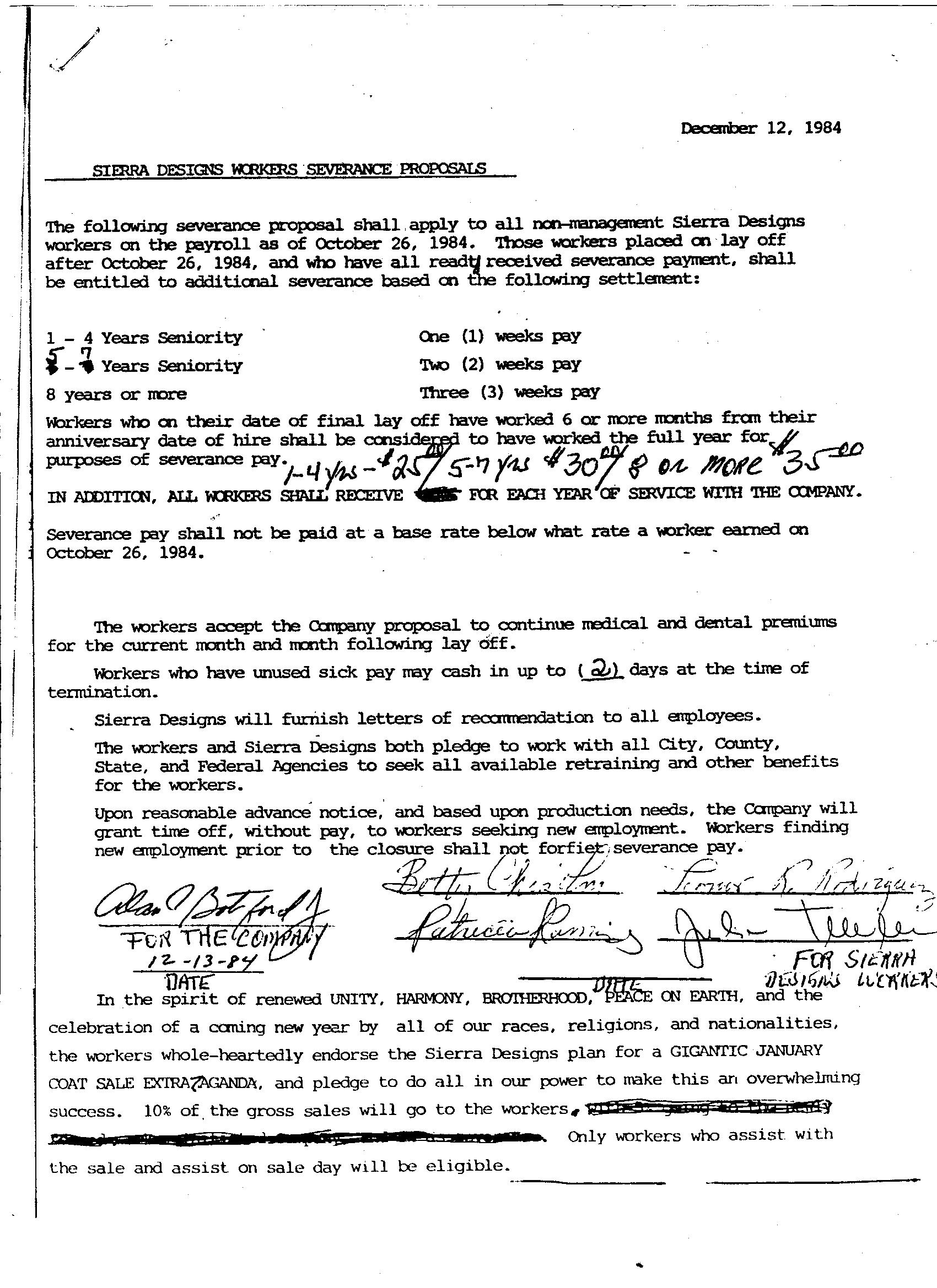 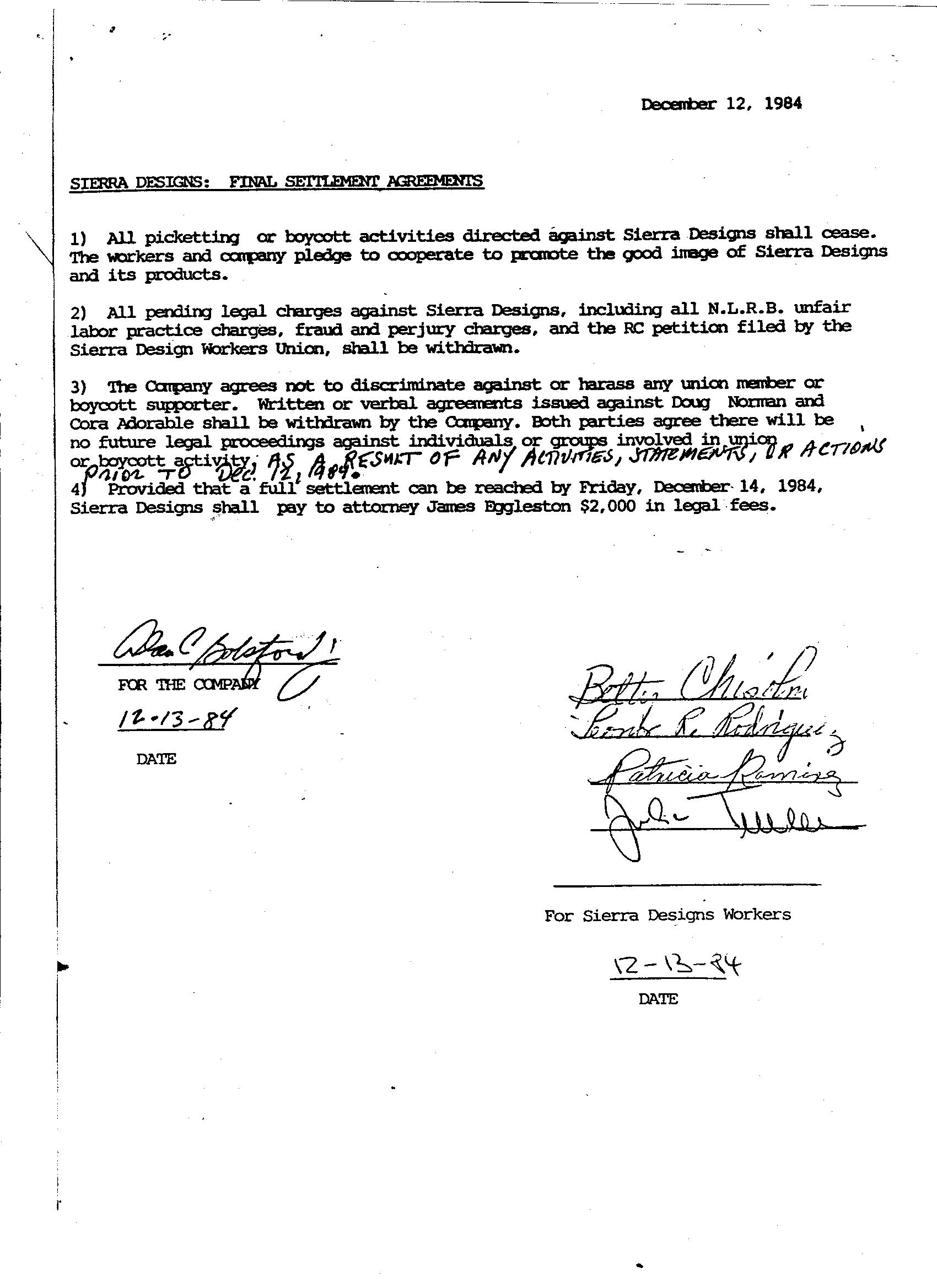 And here's a summary after adding in components of the new biz. 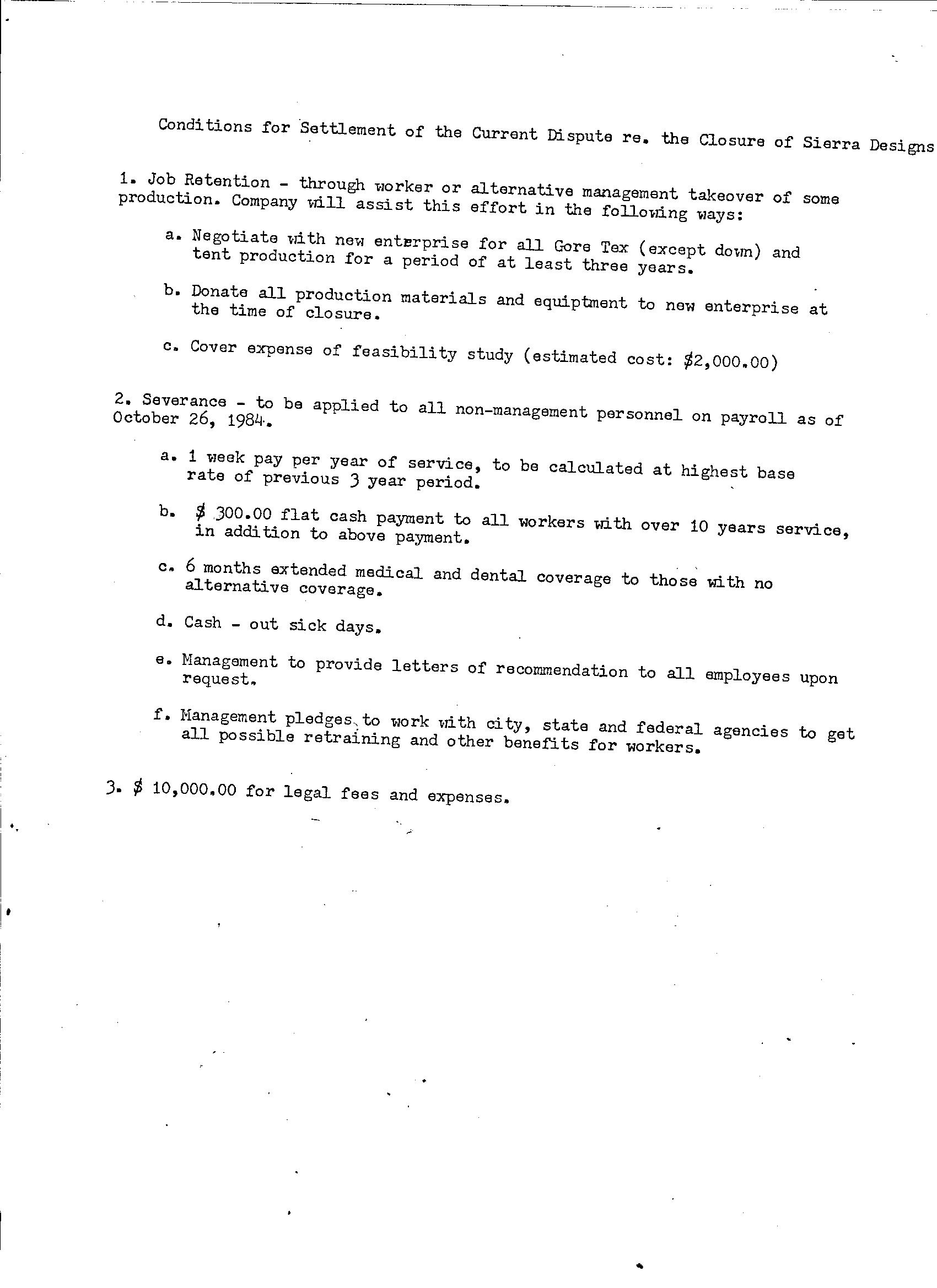 There's a full document set here. Thanks to Susan Schacher for the document trove.

Phil Brown - Man of Many Passions