Powered by Drupal
Story by KateTabor 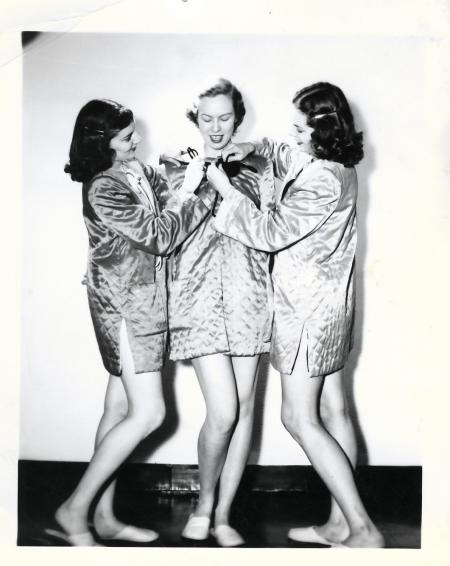 This is a story written by Joan Tabor.

It was a normal January afternoon on the SDSC campus with snow and a bitter wind, but we didn't feel the cold as we were too concerned with the request from Miss Volstorff, Dean of Women, to come to her office as soon as possible. In 1950 when the Dean of Women called, you went.

We threw questions at one another but couldn't seem to find answers.

“Do you think we were supposed to do a job for Miss Volstorff and we forgot?”

“Do suppose we did something wrong?”

“Does she want us to present a program of songs for one of her clubs? She has asked us before and we have always agreed.”

“Well maybe, but the request has never come in this manner before.”

“Well. What could be the reason?”

The members of our musical group were Arlene Johnson, Sinai, Evynelle Storry, Madison, MN and I, Joan Dougherty, Gettysburg. On campus we were the sole girl's trio and were called the General Science Organization Trio (the GSO Trio) for want of a better name. We were in our second year of singing at numerous clubs on and off campus and had been asked by various faculty members to prepare programs of musical numbers to fit the prevailing season. This summons, however, was not a normal occurrence.

We arrived at Miss Volstorff's office as requested and found a chilly reception waiting for us. The Dean sitting at her desk was wearing, as always, one of her beautiful hats, this one was a royal blue velvet and was decorated by the hint of veil. It was the look on the Dean's face that told us that maybe things were not so good. Looking at the three of us she began. “I never thought I would see you young women losing all sense of propriety and by doing so opening the door for criticism of you as individuals and criticism of the college.”

She wasted no time in putting us in the picture. “It seems there is a problem regarding the publicity photos for Rabbit Rarities. The photos of your trio have been used on posters advertising Rabbit Rarities, and the posters are now in the majority of store window downtown.”

The Rarities were a student production composed of musical blackout sketches and one sketch had no relationship to any other act or group. It was sponsored by the Blue Key Fraternity with the income going to support their charities. Those who wished to be in the production had to bring their ideas to the men who had been named directors and they made the final selections for sketches. The Rarities show was the forerunner of the present day “Cotton Tail Capers” This trio was a part of this show for the second year as was Miss Volstorff. The Dean had been a hit with the audiences at previous shows. She would dance on to the stage wearing a beautiful gown partnered by a handsome SDSC student. The couple's dancing was not limited to a waltz but might include the Charleston, a fox trot or they might swing and sway with the hits of the day.

We stood there staring like deer caught in an automobile's headlights as the Dean continued listing the problems. “According to the information I've been given you girls were not wearing any clothing under the quilted robes when the pictures were taken. This should not have happened and it may be necessary to remove the posters from the stores. Tell me what happened. What is your side of the story? Do we need to take any action?”

This is how it all began we told the Dean. Our sketch this year was set in a dorm room and our songs were about dreaming--about love, your present dreamboat, or maybe dreaming that he would appear just for you. The directors knew what we would like for a dorm room set and we told them that our costumes would be short robes in brightly colored satin fabrics. The directors asked if we would be willing to have some photographs taken to be used for publicity. And we agreed.

Arrangements were made for the photographer to come to the living room on the main floor of Wecota Dorm where he could take the pictures. While these pictures were being taken we had an audience of many students and three housemothers, Mrs. Foy, Mrs. Stoner, and Mrs. Kraft who were there to keep a watchful eye on all of us.

Because we would be wearing these robes backstage and on stage for two nights and knowing these places were not warm places to be, we became creative and found we could wear sweaters and shorts under the robes as the robes were loose fitting and fairly long. This was what we were wearing, we explained to the Dean, when the pictures were taken.

Although Miss Volstorff had a print of every picture that had been taken she still seemed unconvinced. Thank heavens Arlene had a bright idea and asked the Dean, “Do you have a magnifying glass?” Fortunately Miss Volstsorff did. Arlene took the glass and showed the Dean a fine line within the side slit of the robe. If the Dean looked closely she could see the short's cuff line on Evy's leg under the robe. Miss Volstorff looked long and hard and finally she said, “Yes, I can see the short's hemline.” It seemed that once she was satisfied with what she saw we had given her sufficient evidence to back our story, and there was no need to remove the photographs from the stores downtown.

As we left we thanked her, and the Dean thanked us for the information and our part in the discussion that went so well. She believed that a problem could be more easily resolved when all parties concerned were friendly and talked calmly to one another. It may have been a calm discussion for her, but for the three of us we honestly felt like we had been through hard labor for several days.

We never found out who brought the complaint to Miss Volstorff, but we felt that it wasn't worth the time and trouble to pursue that information. Our outfits were safe for the show and the pictures could be used.

In the next week Miss Volstorff took payment for going along with us. She heard and liked two of the songs we were practicing for our sketch and she appropriated them for her dance with Bev Craig. Her dance was always one of the biggest hits with the audiences of Rabbit Rarities and we had other songs we could sing. How could we refuse such a lady?

In 2008, the three members of the trio were living in the following cities: