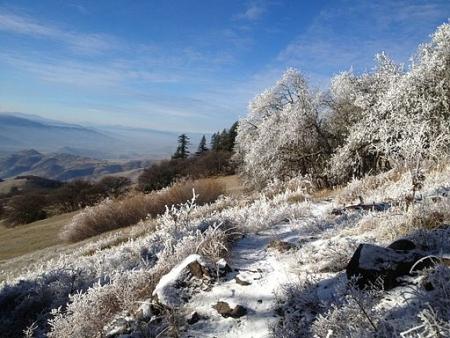 From part 1: During these five months and 2500 plus miles an entire range of unexpected events unfolded, and our jaws dropped daily, as we got to be the recipients of—and participants in—poignant happenings. Here are some more examples:

* In the Baden-Powell area we faced strong winds and precipitation. Sharky found a ski  hut unlocked, with nothing inside except some garbage. We cleaned it up and camped inside, and the next day hiked among rime ice, which I’d never seen before. Big  dangerous chunks started to fall on us and we spent our time dodging among them along the trail. Then, as we approached the summit of Mt. Baden-Powell a group of young familiar faces met us. We continued to the top, then came back to join them, and were offered a shot of whisky for the accomplishment. Cheers to the guyy who packed it with him. (Another time he packed along a twelve-pack of cerveza. Ahh youth!)

* Our plan from Cajon Pass was to hike up and over Baden-Powell, down to the highway, then hitchhike back to Wrightwood and on to Cajon Pass, and to where Tessa and Haggai had left our car. We got down to the highway and discovered it was closed due to rockslides. So we had the rare experience of walking on a closed highway. What else could we do? After perhaps five miles we got to the parking lot at the trailhead to Baden- Powell, where the other road barrier was. There were several cars parked there. Would anyone show up to give us a lift? Should we just start walking all the way to Wrightwood? This was no longer a through road. Within the hour a man came down from a hike and gave us a ride. We passed three hitchhiking backpackers and asked him to pick them up, too. They were acquaintances we had not seen for weeks. We had breakfast together in Wrightwood. Then Sharky and I hitched again, this time to the car. For being in our sixties, we did a lot of hitchhiking.

* Twice in northern California we came across large groups of high school girls (around twenty), whose coaches had brought them on three-day backpacking trips as part of learning how to work as a team, support one another, and survive amidst adverse circumstances. How cool was that?

* Eating Ben and Jerry’s ice cream at lower Kennedy Meadows tickled me, along with using an outdoor shower, eating three meals a day from their grill, and buying sixty snacks to fortify our ‘fuel’ . We had two re-supply boxes awaiting us, as well. I was beginning to realize what an incredible amount of effort it was going to take to survive the next one hundred and seventy miles. I specified ‘lower’ Kennedy Meadows because another Kennedy Meadows was located near Sonora Pass.

* It was poignant how amazingly well all the logistics fell into place.

* Dharma bracelet: My friend Penny made me a bracelet, which I wore continually for the entire hike. It survived all my extreme movements; a comfort daily, to look down, and see it still on my wrist.

* Glen Pass was a phenomenal feat, a natural wonder, in its own league.

* Twice we walked over two passes in one day.

* We did not use a water filter in the Sierra section; the pristine, pure, delicious, abundant high mountain streams quenched our thirst.

* In the Palisades Canyon area we were so hungry while hiking amidst intermittent rain and snow that Sharky picked wild onions to add to our soup. While gulping it down, we saw two kayakers walking a stretch next to the Kings River. Oh my gosh! Two kayakers in the ‘middle of nowhere’ with no gear except their kayaks. Sharky said, “You must be out of your fucking minds.” They replied, “We are beginning to realize that.”

* In Evolution Basin I had set my titanium cup down to get some spring water, then kept hiking. A quarter of a mile later I reached for it on the outside of my pack and realized what happened. I whistled (and my whistle is quite intense) and started running back, with my pack on. We had passed a section hiker (doing the JMT) from South America. He was just starting to ford a stream, heard my whistle, waited and, with a grin, handed me my cup and asked for a picture. With so few belongings, I still left things behind.

* We had no GPS, no Iphone, just our maps. Yes, a few times we hiked a few miles unnecessarily. Once, on the JMT section, we heard yelling and whistling, as two guys got our attention to let us know we had just headed the wrong way, and they got us straightened out and back on the trail. Actually, going the wrong way for a few miles happened several times, often including steep ups and downs. Ugh!

* We celebrated Sharky‘s 65th birthday as we slept one night above 11,400 feet. Maybe I even made coffee that next morning, for the first time. We slept five nights above 10,000 feet. We had gotten accustomed to the altitude and were exhilarated by the views and clarity of air.

By Justin Glasgow for Bureau of Land Management Oregon and Washington [CC BY 2.0 (http://creativecommons.org/licenses/by/2.0)], via Wikimedia Commons:

Here's the introduction and index of all of Bev's PCT stories so far.