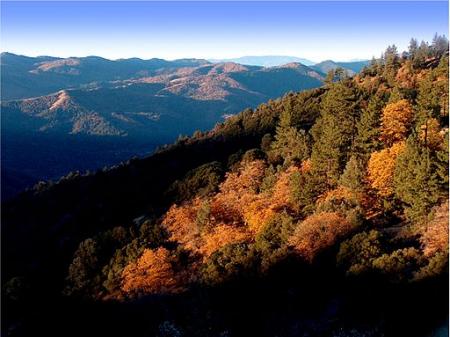 “Practically speaking, a life that is vowed to simplicity, appropriate boldness, good humor, gratitude, unstinting work and play, and lots of walking brings us close to the actually existing world and its wholeness.”  — Gary Snyder, The Practice of the Wild

During these five months and 2500 plus miles an entire range of unexpected events unfolded, and our jaws dropped daily, as we got to be the recipients of—and participants in—poignant happenings. Here are some examples:

* 100 mile marker: Someone had designed rocks to display ‘100’. We camped at this spot after hiking the difficult, dry, San Felipe Hills. A celebration!!! All by ourselves!!! One hundred fricking miles! Unbelievable! We did find three ticks on my pant leg that evening.

* Twice in the initial one hundred miles we were given beer, first by a guy driving around in his vehicle, looking for hikers, and offering a beer or two from the ice chest in his trunk. Then, at an official campsite a ranger, who was also camping, chatted and offered a beer from his trunk. lf we were in a town, it did not mean stores were open, or that there was something much more than a post office. Rarely while on the trail, did we catch a ride to some place bigger, like Tehachapi, Big Bear, or Ashland.

* The Lassen burn happened in 2012 and walking all day long through it was rather unpleasant and uncomfortable, and especially heart-wrenching. We did meet a ranger who, in his days off, was training for a local race which was done with bare feet.

* Warner Springs was our first experience with the PCT culture, where we arrived at a community center with meals, computers, trail angels, hikers coming and going. It was also our introduction to hiker boxes and the treasures they held. The following day, in the wee morning hours, I came across a mountain lion drinking from the stream ahead where I was to cross. I made the silly mistake of calling to Sharky to let him know, and the exquisite creature took off.

* We met people from all over the world, with similar intentions, similar awe, similar curiosity, similar gratitude, similar challenges and joys.

* One unbearably hot aftemoon a water cache appeared in the middle of nowhere as a trail angel had driven many a mile on a remote dirt road to deliver oodles of water containers. About ten of us crowded together under a single Joshua tree, waiting out the afternoon heat. Sharky entertained us with his mandolin music, singing, and humor. Those smart young people with their gadgets often notified one another of where trail magic was occurring, so they often knew when something awaited us. It still surprised us every time. (And….what despair when we would arrive too late, and the magic had been devoured.) One hiker said “I hate hearing rumors about Trail Magic ahead, because then that is all I think about, and it may even be gone when I get there.”

* What a surreal experience to walk eight hours along the covered Los Angeles Aqueduct, along with massive wind generators, howling winds, and a full moon!

*In the Tehachapi area we again walked amidst towering wind generators, and then sixty- plus mile an hour winds. We crossed paths with three young men who were fighting it out with the wind, which had picked up their tents and blown them quite a distance away. We somehow managed to get up the damn switchbacks without being blown off the barren mountainside, and hunkered down under the only tree on a sorta kinda flat spot. (We were desperate and thoroughly depleted.)

* We used mass transportation a few times (NOT to skip parts of the trail.) In June we had taken two weeks off trail for some family events and to re-supply. We then caught a ride to San Francisco, rode an all night bus from there to Los Angeles with a huge duffle bag filled with stuff for Tessa to put in our re-supply boxes, memorable because we chose to ride a bus instead of fly. At the end of the hike, in late September, we got off the trail one day, stayed in Seattle the next night. Tessa had gotten us a good deal online. A hiker from Japan, with minimal English, was with us. The hotel was going to charge him a much higher price, until I spoke up. That was so not okay. We walked around the city, stopped at a wine bar, saw a notice for music that night, and went straight to Dimitriou’s Jazz Alley to hear David Grisman’s Quintet. The following morning we rode the train all night from Seattle to San Francisco, where Josee and Cody picked us up, and poof! three hours later we were at home in the mountains. It happened so fast. We were rather whacked already, and that whirlwind of motion, vehicles, overstimulation and four walls, and not walking, sent us into a bit of a numbness, a state of shock.

Here's the introduction and index of all of Bev's PCT stories so far.