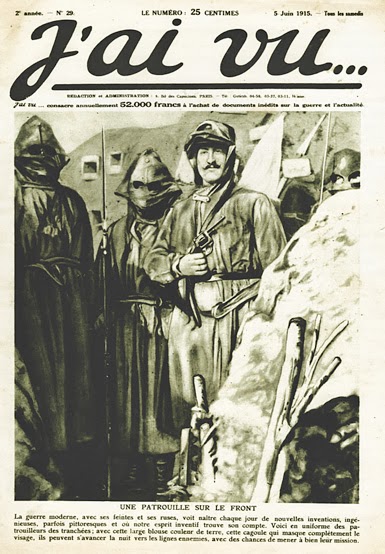 Despite a lot of humalimali about the time-frame for the "first" cagoules, it's just one of those obvious garments that have their origin in the mists of time.  After all, it's just a large anorak!  As an illustration of this, my first cagoule project was modeled on a very much beat-up sample that I got from Holubar, circa 1960.  It was virtually in rags, having been made in the mid-30s and having gone all the way through the War.  I had dropped by for a fitting [of one of his superb expeditionary down jackets] and had mentioned the fact that I was about ready to attempt a cagoule to replace an unsatisfactory one that I'd borrowed.  He dug a shot one, out of a box that contained a number of potential projects, asking only that I send him my derived pattern.

The traditional definition we had at Camp Four was that the cagoule had originally been made in France [during the War] out of paraffin-waterproofed flour-sacks or whatever else was available. Because the French alpinists wanted to climb, they cobbled together gear as best they could: they were going to go climbing anyhow. However, the 30's garment, from Holubar,..

put paid to that time frame, not to mention the cagoule-like garments used in the Norwegian Resistance at the same time.  It would be surprising if the "cagoule" - whatever it was called - wasn't in common usage during the 20's and earlier, much earlier, say 20,000 bce.

The problem is that things fall out of common usage, only to be reinvented with a flurry of hoopla.  The actual garments don't disappear,: it's just that they drop out of sight for the vast majority of potential users.  If nothing else, keeping the garment in the public eye might spare us yet another generation of would-be inventors/designers.  The post-Twenties period is a good example of lost traditions.  A tremendous amount of mountain-related gear was lost because it was a luxury trade, and the 20s killed most reasonable luxuries.  The people who had the money weren't interested in mountaineering: those who didn't were too destitute to be very visible.  The commercial market just disappeared.

I strongly suspect that the cagoule never really went out of fashion after the Crash of '29: it just didn't have "press coverage".   After all, the battered sample that I copied around 1960 wasn't a proto-type. Although Holubar didn't know precisely when it was made, other than the fact that it was "pre-War", it was probably from the mid-30's.  Neither one of us cared about chronology since the cult of outdoor equipment was still [thankfully!] in the far distant future, i.e. Now. . . .

[The illustration is from a French magazine published in June of 1915. The caption cites 'cagoules with masks' as part of camoflauged uniforms. I found the illustration in the Camoupedia blog.]

09/18/14
PhillipScott
Story Circles that can see this:
Outdoors - All Public
Primary Story Circle:
Our Newsletter