Powered by Drupal
Story by PaigeBoucher

...we renamed the company from American Hardwear to Mountain Hardwear...we kept the nut but re-worked the colors of the font and made it a little more appropriate: gold and silver and black

Paige Springer Boucher: So we had our group of nine people and I was the Marketing Director and my first job was to get a sign made. And we had already re-worked the logo and renamed the company from American Hardwear to Mountain Hardwear. And we kept the nut that American Hardwear but we re-worked the colors of the font and made it a little more appropriate; the gold and the silver and the black for our industry. I liked really natural looking things so I went and found a wood cutter and we made two sign; one big one for outside the building and one little one for our door inside the foyer. 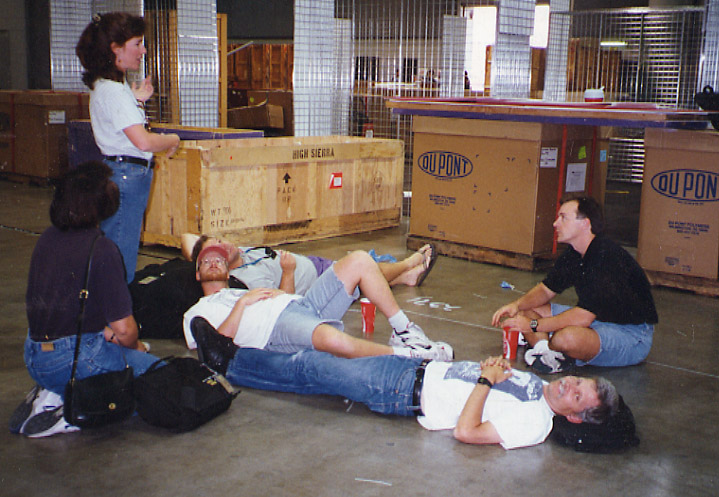 And then I had my other jobs where I had to make a booth because the trade show was coming up in 90 days and I had to make our first brochure. And I had to get the word out that we were launching this new company and there was nothing like email or anything like that or social media. So we created a little box, a little almost like a jewelry box and I went to the hardware store and I bought 150 nuts, big inch wide, inch round nuts and I found somebody to cut the boxes and we printed them. One afternoon I gathered everybody in the middle of our borrowed office space, we all folded boxes and glued nuts on a little piece of cardboard and made this mailer and we mailed it off to our potential retailers and anybody that we wanted to know that we were starting this new business. So that’s how we got the word out.

And then I had to make a brochure and like I said I was really into natural looking papers and things so we used card stock for the brochure, the mailer and a booth, was basically big pieces of inch-wide cardboard and it had this real temporally feeling. So an aluminum booth units [uprights]. 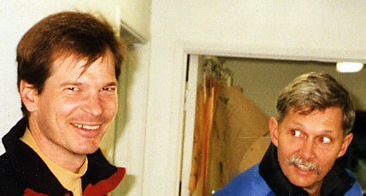 Al: It was an erector set booth.

Paige: It was an erector set booth.

Al: And Kent [Laak] cut that cardboard out, right? At the warehouse? That’s how Kent got started [at MHW].

Paige: Yup, exactly. And we used actually Paul Kramer’s wood studio. So we took it over and we were polishing aluminum and sanding particle boards for writing desks and a reception desk and hand stenciling the big nut on the big pieces of cardboard and we came up with this 20 by 20 booth. And then years later we still had parts of this booth that evolved into parts of our booth, I don’t know, 5 or 8 years later until we finally replaced the whole thing. 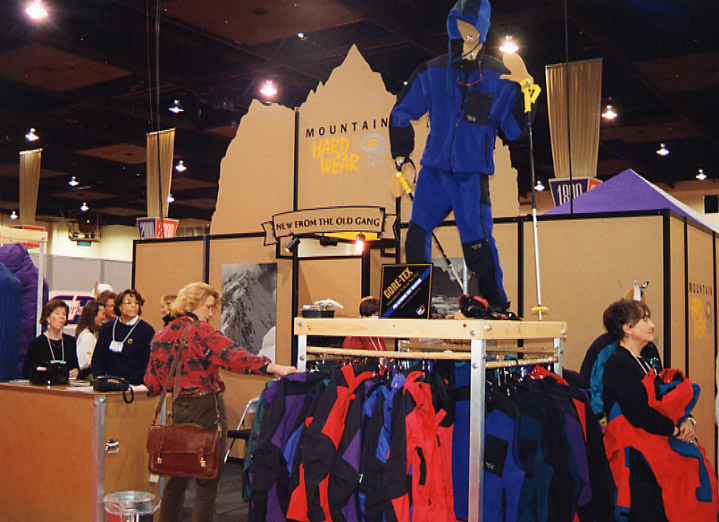 You could probably go into the Mountain Hardwear offices and find parts of either a piece of cardboard with stencil logo on it or a table made out of particle board or I don’t know what else, but there were pieces of that booth around for years.

Al: And how compressed was that timeline? I mean, Paul talks about having to put this line together to show to retailers in a massively compressed timeline.

Paige: Well, Outdoor Retail was the end of January and we walked out on October 31st so basically that was three months.

Paige: And we’d all been thinking about things and so we had ideas about how to go forward when we landed in our new space, but really 90 days.

Transcipt: Paul: Jack, I was in Hong Kong as you said and I had written a letter because of course... Read Story
Paul Kramer - Talking to Jack about the first two weeks Mountain Hardwear and starting Product Line

Transcript: Paul: Yeah, it was a scary thing to start Mountain Hardware for me. I’d been at Sierra... Read Story
Paul Kramer on Helen Li's essential role at Mountain Hardwear

The founding act of this website was to get the Mountain Hardwear founders that lived in the San... Read Story
Mike Wallenfels Intro - Intergalactic Sales Manager

Transcript: Mike: My name is Mike Wallenfels. At the time at Sierra Designs when just before... Read Story
Mike Wallenfels begins his career in sales management as SD's Regional Sales Manager for Earth

The question: How long had you worked at Sierra Designs prior to the beginning of MHW? Transcript... Read Story
Mike Wallenfels - Halloween 1993

Transcript: Mike: Halloween day; so I was incredibly nervous that day. I knew what was going on in... Read Story
Mike Wallenfels - What does an Intergalactic Sales Manager do?

Transcript: Yea...so there were really only a few of us in the office, a handful, only 6 people,... Read Story
Mike Wallenfels Discusses Mountain Hardwear's First Product - rough cut

Transcript: So I am Christina Clark, mostly called Chris and my original position at Mountain... Read Story
Chris Clark - Halloween / Transition out of The North Face

l asks Chris about how she heard about Jack deciding to start a new company and how she decided to... Read Story
Chris Clark - Old Office / New Office

Transcript: Roberta: It was very kind of nerve-wracking that day with a lot of anticipation what... Read Story
Roberta Hernandez - Transition to MHW

Transcript: Roberta: The first couple of weeks at Mountain Hardwear I think for me were –... Read Story

Working at the Middle Table