The first Oval intention came off the sewing room floor October 6th, 1975.  There was a small ceremony (see photo) attended by Hap, Bob Gillis, Mark, Dan Castner, Helen Li, Hisako Haskins and the sewing machine operators in the tent section.  I christened the tent by sprinkling freeze dried chocolate ice cream on the gold and tan triangulated skin.  It was clear that we had something special. 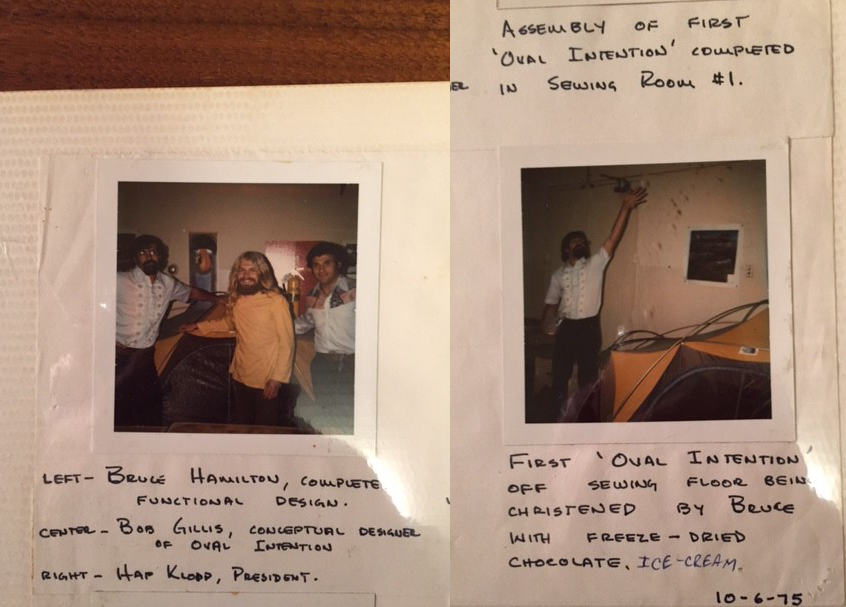 The Epistemic Tent appears in the fall’75 TNF Catalogue along with a quote from SYNERGETICS.  Not just another subtle variation of the tent line up, but rather a “compound curvilinear structure” as Bucky defined it in 706.10.  The Oval Intention was certainly not “[an] aesthetic accident”.  Following nature’s geometry, it sure was pretty. 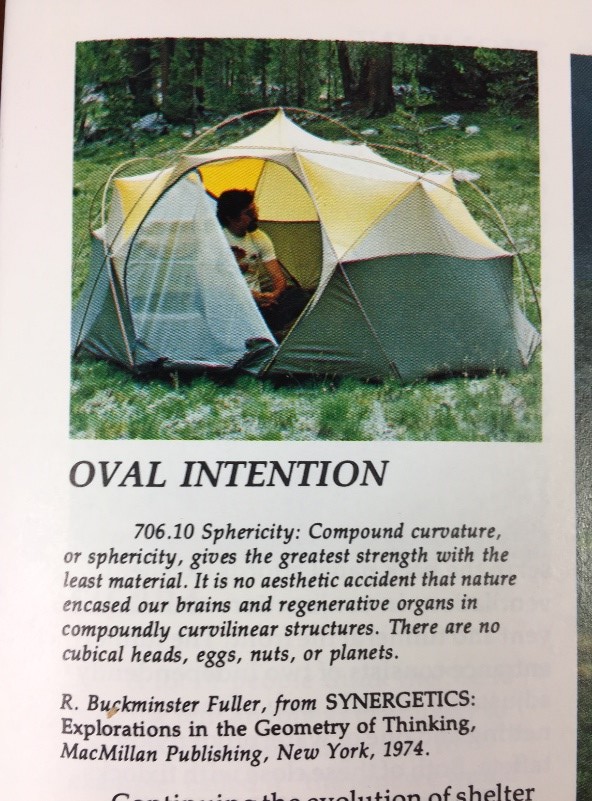 "706.10 Sphericity: Compound curvature, or sphericity, gives the greatest strength with the least material. It is no aesthetic accident that nature encased our brains and regenerative organs in compoundly curvilinear structures, There are no cubical heads, eggs, nuts, or planets."
--R. Buckminster Fuller, from SYNERGETICS: Explorations in the Geometry of Thinking, MacMillan Publishing, New York, 1974. 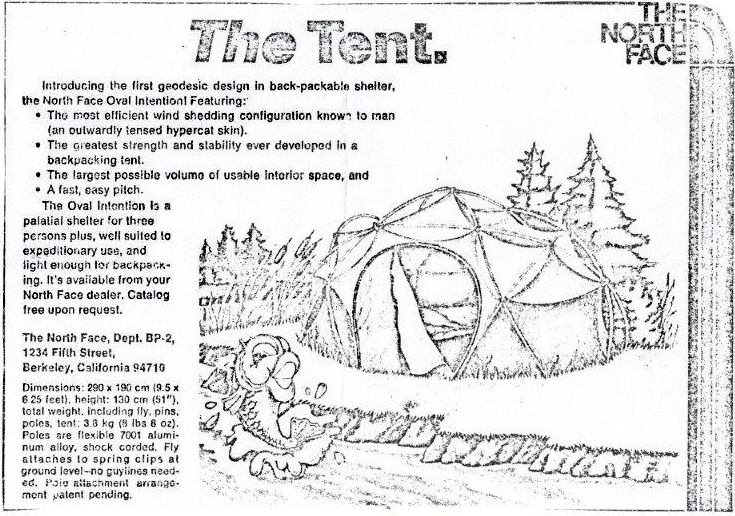 As you can see in this early ad, we believed in and promoted the catenary cut in the triangle edges.  That omni-triangulated, vertexial, outward pull created the “hyper-cat skin”.  It was later, after The Now House Experience with Gillis and his flagrant violation of our contract that we decided to move to pole sleeves.  The pole sleeve proved to have some real advantages over the rings, number one of which was that sleeves had been around forever and did not fall under Bob’s patent.

Early Praise for the O.I.

“That Oval Intention is just unbelievable.  When I first looked at it, I thought you had hired a madman in the design department.  But after it was once pitched – wow!  It is without doubt the best dome design going, and that by a country mile.  Although I haven’t [finished] compiling all the data yet, I’m almost certainly going to tag it as the outstanding tent of the entire group.  It stood there on the ice for a month in wind and snow.  Never deformed, flapped, or showed any sign of weakness.  Just creaked a little in the wind when the noise from some others was deafening.”

From a letter to Hap written by Wayne Merry in May 1976 about a tent evaluation for Backpacker magazine that he was conducting.

“Current innovative tent designs include sweeping, aerodynamic structures, updated adoptions of the Indian tepee, domes suspended from arcs and among the most interesting, a tent that faithfully employs the geodesic concepts advanced by R. Buckminister Fuller.

"The tent, called the Oval Intention, was introduced by the North Face company several months ago.  For now the tent represents the peak of advanced backpacking technology and design.

"The unique shelter has the functional as well as aesthetic value.  The tent weathers any storm, sheds snow and rain well and provides maximum interior volume for weight.  In many ways it is a backpacker’s dream come true.

"The North Face Oval Intention was designed by Bruce Hamilton, a Fuller student, and Mark Erickson.  They developed a system of tough, flexible aluminum shafts sliding through rings on the tent’s surface to achieve the desired geodesic form.

John Christensen, writing in the “Wisconsin Engineer” May, 1976. 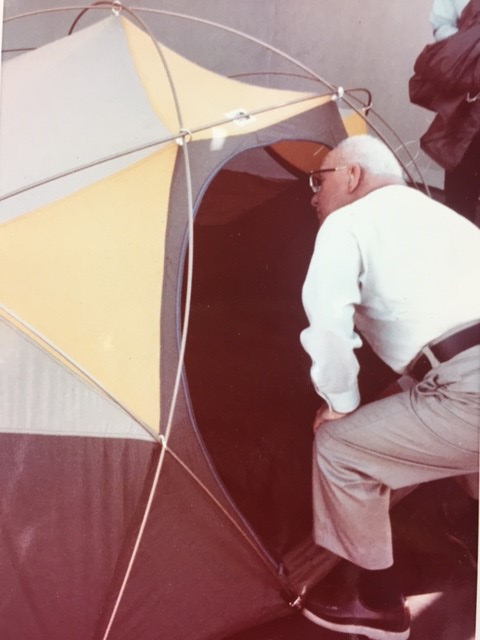 Having used a quote in our Fall 1975 catalogue from Bucky’s recently published book, SYNERGETICS, sub-titled, Explorations in the Geometry of Thinking, copyright 1975, I thought it would be a good idea to ask him for permission.  Please see my letter to Bucky of Dec 4th, 1975.  In that letter, I also offered, on behalf of TNF, to give him an O.I. and to meet him anywhere on the West Coast to show him the tent.  That led to his “I am delighted . . .” letter in reply, which in turn led to the meeting with him in his Santa Monica motel room Jan 14th, 1976.  Mark, Bob Gillis, Jim Shirley and I, showed up at his motel with the O.I. in hand.  We climbed the outdoor stairs to the second floor and knocked on the designated room door.  Bucky answered the door and invited us in.  Jim pitched the tent on the balcony and in short order, Bucky strolled out to take a look.

I remember Mark saying after the meeting, how surprised he was to find RBF in the motel room with no assistant, no entourage, nobody but Bucky.  I had the same feeling.  It was moving for me as it was our first face to face encounter.  And he was so open, so giving, so human and appreciative of what TNF had accomplished.  One thing that I have always known is that Bucky appreciated that the O.I. was in production.  Bucky had a saying:  “Ideas are easy, inventions are harder, and mass producing the invention is the hardest of all.”

We went back into his room and as he sat at the table, after signing both Jim’s and my copy of SYNERGETICS  [link here], he quickly drew the following sketch, saying that the four frequency tensegrity tent he was sketching was one that he wanted us to make.  Pure and total amazement!  Bucky Fuller saying, “I want you to make this one”. 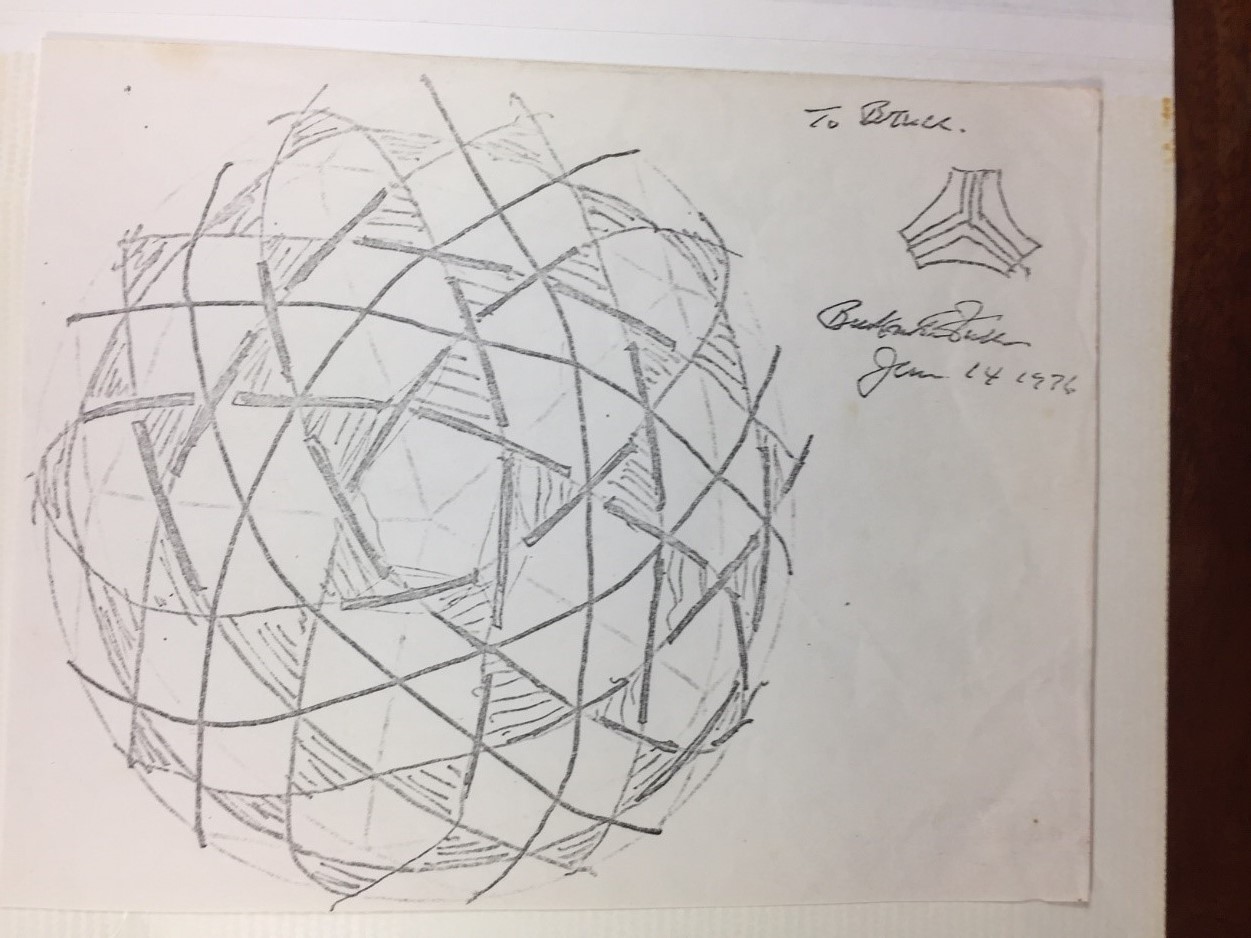 Well, we never did make the Tensegrity Tent, but that January meeting led to an invitation from Bucky to put TNF’s down sleeping bags in his Exhibition, called The Now House in Vancouver, B.C. as a part of The United Nations “Habitat” – World Conference on Human Settlements.  On March 8th, 1976 Bucky wrote to Hap:

“Our exhibit will be a working display of a self-sufficient dwelling unit for a family of four.  Two, fourteen foot diameter geodesic domes will provide a protective covering.  Our purpose will be to demonstrate resource-efficient, and environmentally sound housing using presently available components.

I am writing to you because we want to include your down bags in this exhibit.”

Hap wrote back on March 10th and agreed to donate the sleeping bags.

“I am in receipt of your letter of March 8th and I wanted you to know that The North Face would be delighted to participate in the exhibit your staff is putting together for the U.S. (sic) “Conference on Human Settlements”.”

“Bruce Hamilton (whom you met in Los Angeles showing you our/his geodesic tent) and I are both interested in attending the exhibition.”

Shortly thereafter, came a letter from Tony Gwiliam, who was tasked to put together the exhibit wrote to “The North Face Tent Company” and asked to have an enclosed questionnaire out with the description and attributes of “The North Face Oval Intention Tent”.  As it turned out, the O.I. was included in the exhibit. 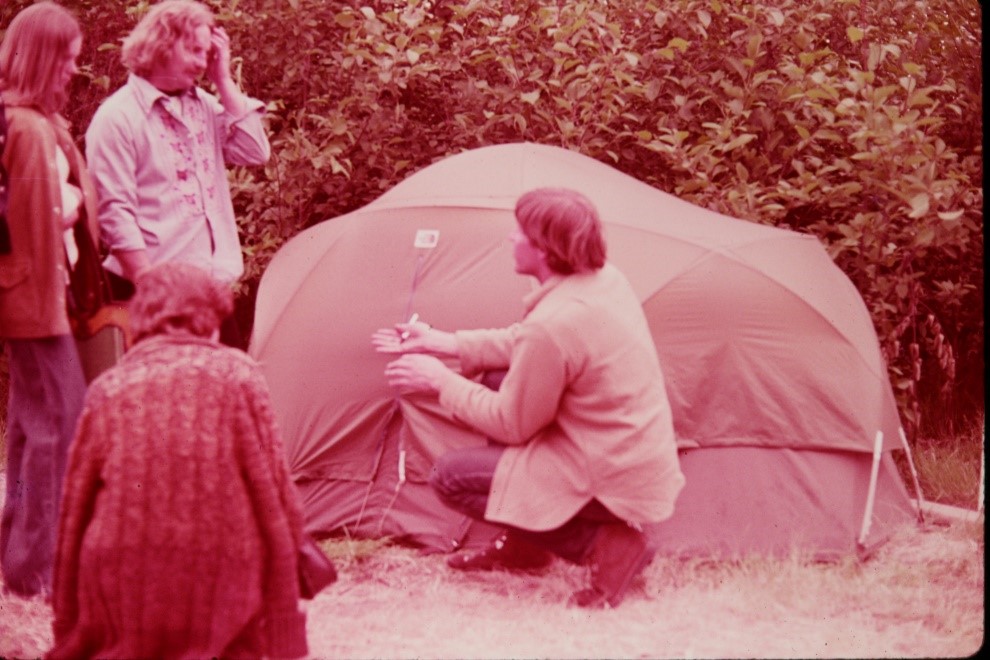 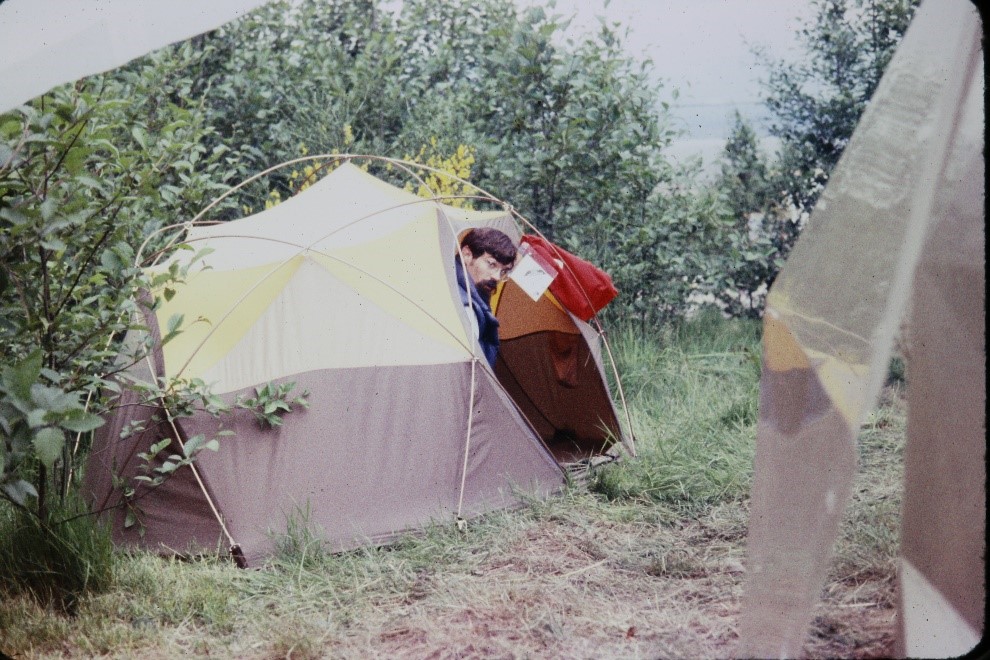 Jim Shirley and I went to the Now House Exhibit.  The O.I. was prominently displayed and viewed by thousands.

The visual appeal of the tent provided an ideal backdrop for one of Bucky’s many interviews.

Shortly after The Now House, Jim and I drove his BMW 2002ii non-stop from Berkeley to Philadelphia to attend the World Game Workshop.  The workshop began on June 27th and ran through July 16th 1976.  Because of Tony Gwilliam and The Now House connection, we were invited to take the stage at one of the plenary meetings to present the O.I.  In attempting to put together this narrative of the Fuller and TNF connection, I came across a tape in the back of a filing cabinet drawer labeled “Oval History”.

So forty years after the tape was recorded, I transcribed it last week.  In that talk, I said: “What I wanted to do and still want to do and what this is an expression of, is getting the geometry into a child’s head by going camping.  Kid goes camping and he sees, hey, these aren’t right angles.  Might even create a thought in his head.”

While I was talking, Jim assembled the tent on stage (link to transcript).   After Jim made a few testimonial comments, he flipped the assembled tent upside down and passed it out into the audience, where it was quickly handed one to another over the heads of the excited audience.

The next link in the TNF/RBF connection occurred at a Bucky Fuller weekend retreat at the Pajaro Dunes Resort.  That extraordinary meeting took place in April of 1977.   At that meeting, Bucky asked me for something that led directly to his first visit to TNF in October of that year.  What he asked for will be explored in the Part 3 of this story.

Hap Reaches Out (All photos referenced in this article are in the slideshow here. It is worth... Read Story
The North Face and R. Buckminster Fuller Special Connection - Part 2

Pajaro Dunes Retreat As I left off on Part 2, I was about to attend a Bucky retreat at the Pajaro... Read Story
Bruce Hamilton's The North Face and R. Buckminster Fuller Archive
Misc Docs: The First Family Tensegrity Tent - May 1975 1975 December Correspondence Bruce Hamilton... Read Story
Ingrid Harshbarger's photos of Buckminster Fuller at TNF
By all reports, this event had a profound impact. Click here for the related story. Read Story