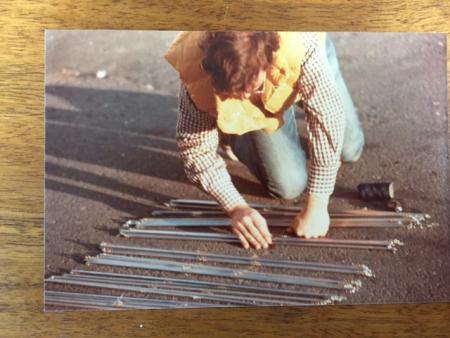 (All photos referenced in this article are in the slideshow here. It is worth opening this link in a separate browser window and toggling back and forth as the images are referenced.)

Let me start by saying that I am neither a historian nor a journalist.  I am sure that there are some memories from others that would improve the story and add to the historical accuracy.  What follows is my story.

It starts with Hap Klopp asking a family friend, Don Butts, whose family in turn was close to Bucky, to write to Bucky. 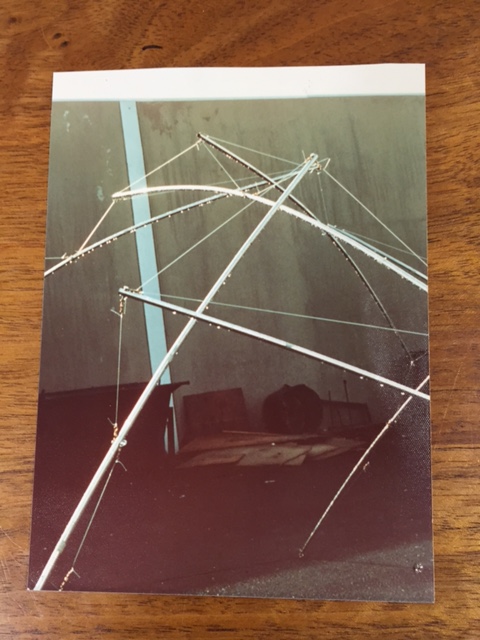 In that letter of April 18, 1970, (see photo) Don stated:  “I am now loosely affiliated with a small company that produces what I believe to be the finest equipment presently available.  The company is The North Face  . . .”

He went on to describe the state of tent technology in 1970, “archaic designs” and to directly ask for Bucky’s help.  “I present these thoughts to you only as food for thought.  If you should come up with any suggestions, I would most certainly welcome receiving them and passing them on to my friends at The North Face.”

On June 4th, 1970 Bucky wrote a response (see photo): “I have thought a great deal in the past about your subject of the compact, lightweight, back-packable environment controlling device; and though I have produced many air-deliverable, multi-personnel shelters, I have not finalized anything yet for the single occupant.”

Bucky continued:  “At any rate, I am accepting your challenge, and will at the earliest possible time – delayed only by a severe set of priorities – send you my proposed solutions.”

So the Bucky’s awareness of The North Face began with Hap’s intuition that there could be a collaboration of back packing tents and Synergetic Geometry, popularly known by its embodiment as geodesics.   The TNF/RBF connection was made. 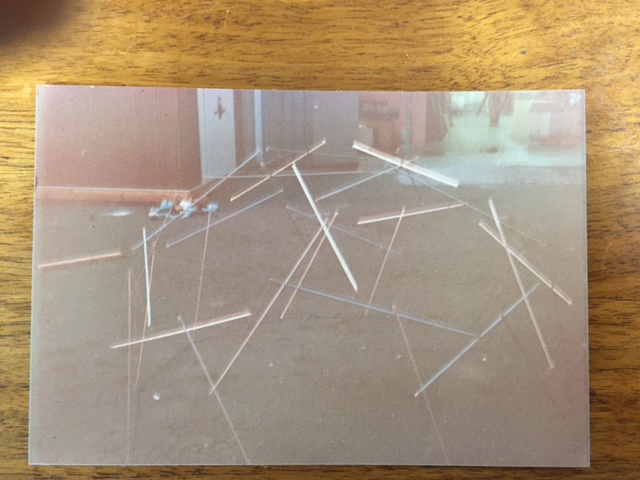 In September of 1970, I was lucky to share a house in Berkeley with Mark Erickson.  I needed a job and he encouraged me to try to get on where he was working at TNF.  Mark also gave me his job seeking method:  show up at 7 A.M. on Monday morning every week until they hire you.

I did that and it took me three Mondays.   I didn’t see Hap and was not hired by Hap, but by Tony Landetta who ran the production end of the enterprise.   At that point, I had been reading Fuller’s books.  In the summer of 1971, I resigned from TNF and went to Carbondale to attend Fuller’s “World Game Workshop”.

Upon returning to Berkeley, I began making Tensegrity Structures.  I was not thinking of Tents yet.  I was not aware of Hap’s connection to Bucky.

Needing to put food on the table, I went back to TNF and to Hap directly this time.  Hap graciously welcomed me back into the fold.

Within about a year, I brought a geodesic sphere model, thanks to Domebook 1, to Hap’s office early one morning.  He often got to work by six A.M. so that he could deal with the East Coast.  I believe it was at that moment that he connected me with Bucky and with his drive to bring a new tent to life. 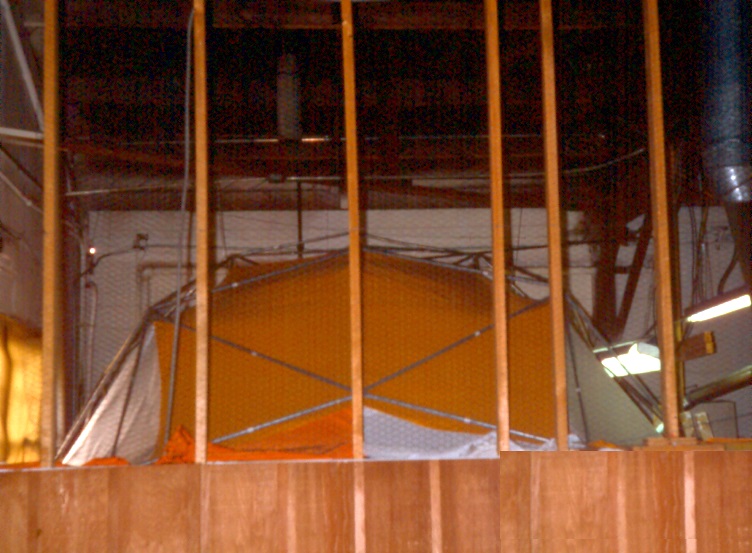 Jim Shirley began running the mail order department and producing and writing copy for The North Face catalogue by 1971 (see photo of catalogue insert describing color of T-shirts pictured in black and white).

Jim is a significant part of the link to Bucky.  Jim will play an important role in the relationship a little later in the story.

Jim’s office was in one of the old 5th Street warehouse buildings that TNF grew up in.  He asked me if I could design a “dome” to go over head so that he was not looking up into the rafters.  We did that and made the “Turtle” dome.  The frame was made of electrical conduit with the ends flattened, drilled and bolted together.  The T-Dome was the first stretched dome (see pictures) that I made.  It was rectangular by design, and predates the Oval Intention by six months.

Jim remembers standing under the T-dome with Hap and discussing making “tents like this”.

During this time, Hap and Mark were allowing me, my actual job was “Quality Control and Engineering Manager”, to spend time in the design room.  My early attempts at making a “tensegrity tent” (see pictures) were not productive.  I was stuck on Tensegrity.  The complexity of the struts and harness did not work well for small tents.  Then along came Gillis. 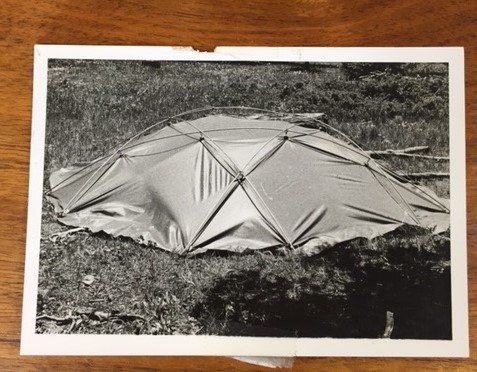 My first memory of Bob was one afternoon when Jack brought him over to the factory floor.  Long, unruly hair, ragged clothes, looked like he just came in from camping in the woods.  Well, he had.

But he also had a solid background in structure and tensegrity structures.  He had a model that used straight poles, connected to a simple skin and pulled in at the ends, not to each other, but to the skin.

He built and lived in large, room sized “tent” that he called “Freedome” (see photo). This structure had continuous flexible poles that crossed in a ring.  The ring in turn was attached directly to the skin.  Bob called this dome a “Tentflatable”.  It is very simple, don’t create a structure with poles and hang a skin inside.  Use the skin to pull the poles into the center and the poles to pull the fabric out to the surface.   And pop, there it is, a bubble, a tent.

Bob played no further role in the TNF/RBF nexus, but his contribution of “Tenflatable” proved to be the key to the Oval Intention.

And as will develop in Part 2, the O.I. proved integral to the special relationship. 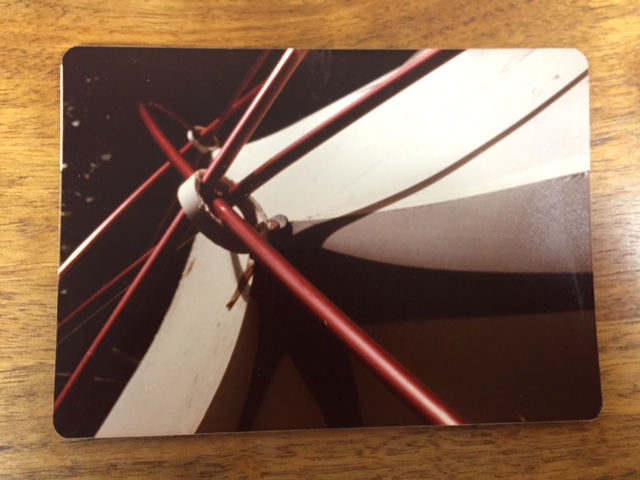 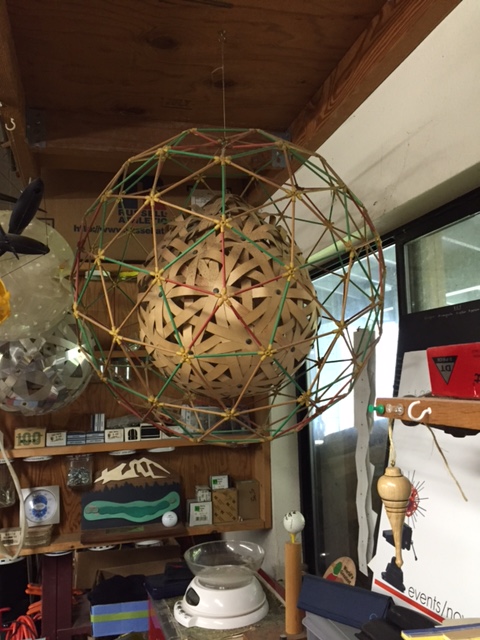 Hap Reaches Out (All photos referenced in this article are in the slideshow here. It is worth... Read Story
The North Face and R. Buckminster Fuller Special Connection - Part 2

Pajaro Dunes Retreat As I left off on Part 2, I was about to attend a Bucky retreat at the Pajaro... Read Story
Bruce Hamilton's The North Face and R. Buckminster Fuller Archive
Misc Docs: The First Family Tensegrity Tent - May 1975 1975 December Correspondence Bruce Hamilton... Read Story
Ingrid Harshbarger's photos of Buckminster Fuller at TNF
By all reports, this event had a profound impact. Click here for the related story. Read Story