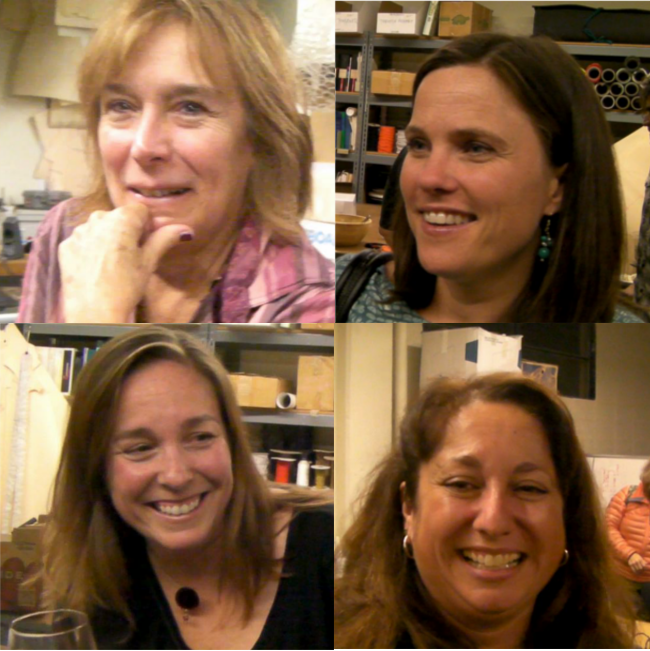 Apologies for the extensive background noise, but we were partying.

Doug: When did you start working at Mountain Hardwear? What brought you there?

Nancy Eisen: I started in November 1996, but I was at Mountain Hardwear on the very first day that they ever ever opened their offices, which was Monday, that would have been November 3rd, right? Yeah, Monday, November 3rd. I went over to their new offices with my boss at the time, Jan, and we took beers and we took the anti-Odyssey ray gun that we made and we took pencils I think and rulers; toy pencils and toy rulers. So we took some office supplies and some beer.

Roberta Hernandez: And we definitely needed them.

Nancy: I’m sure you did.

Jennifer Slaboda: You have one folding table and like six chairs around it.

I started in October of 1998 in that same building. And we were bursting at the seams by the time we left that building. We had really…

Nancy: Yeah, we sure were. We expanded like once or twice.

Roberta: I mean, you guys were on the third floor.

Nancy: Didn't you take out some walls, too, or something.

Roberta: Yeah, well, we kicked out some tenants.

Jen: Yeah, we still had the beer-thirty.

Roberta: We still had the beer-thirty, absolutely!

Jen: We still had the beer-thirty, and it was like probably like 10 or 12 of us sitting around the table.

Jen: The big table and we had our beers and our cards and our  junk food.

Nancy: And then sometimes we used to go to The Mallard [bar]..."the duck".

Jen: Or to the Pyramid, we'd go across the street to Pyramid, not far from here.

Doug: So how did you initially get involved? Did you work at another backpacking equipment company?

Jen: I started actually with Polartec...Polartec Fleece and I think Jack and Paul were interested because I was really into the Polartec brand, and I was all about branding. And they said, “Well, we need somebody to build the Mountain Hardwear brand,” and they were looking for somebody in marketing. And so that’s how I came onboard.

Doug: I’m getting people’s stories about how they got involved with Mountain Hardwear.

Julie ONeil: It’s Roberta’s fault. I came down for an interview in a really ugly outfit and I said that I could keep a ficus alive for six months and she thought, "this woman is a genius, I need to hire her!"

Roberta: Considering that I kill everything, it was fantastic to have Julie on board.

Julie: It was a creme-colored suit and a silk top. I still have it.

Jen: I still have [inaudible] ???-green with a little scarf. Everybody is like, who is this woman?

Nancy: Oh, my God. Somebody is wearing suit in our building.

Julie: This was so [inaudible]. I think I even wore nylons!

Jen: They told me, they said, “You know what, the dress code is a little bit casual here...when you come back, dress differently.”

Nancy: They probably prefer it now. I have to say, too, right now, that at North Face there was a guy who got hired while I was working there, and he wore a tie.  And they fired him because he wore a tie to work, I mean it was like, “he’s wrong.”

Jen: Well, obviously Julie and I walked through the office they knew we needed help.

Roberta: Well, we knew you needed help. You obviously needed help so we took you in, and helped you loosen up just a little.

Roberta: Obviously they're not [inaudible].

Julie: Oh, they are wretched right now. Cover them up. Nobody should see them, yeah. So yeah and that’s how we got involved with Mountain Hardwear, with our ugly interview outfits.

Nancy: I can’t even remember what I wore.

admin
Offline
Joined: 02/22/12
Further comments by Nancy Eisen
I checked with Nancy to make sure Jan Fletcher was the boss she was refering to and that I was attaching the right person. Nancy's response: Yep – I was reporting to Jan. Jan, Betty Davis and I all brought beers and toy office supplies to you guys on day 1 – including the “Anti Odyssey Ray Gun”.  I remember when Jan got off the phone with Jack that morning and turned to all of us at EO [Erickson Outdoors] and said something like….   Well guess what I just found out???! That was the day I knew I wanted to work for Mountain Hardwear.
Top

Mark Perrilliat at The North Face, Sierra Designs, and Mountain Hardwear, in brief