Here's a landing page for this panel of luminaries with a transcript, an audio recording and part 1 of the video. You can also find part 1 and part 2 of the video on youTube. The sound sucks at the beginning but gets betters. I particularly liked the end of the 2nd video where the panelists start trading stories. That's about 18 minutes in.

Below are some excerpts from the transcript. 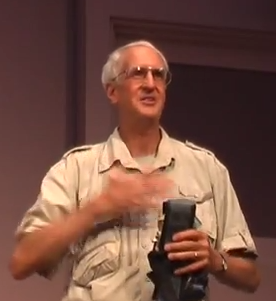 The prop is a [climbing] harness, which is one of the first products that I designed. I designed it because we used to tie in around the waist, and when you fell it hurt. When I climbed in Germany, we tied around the shoulders and the chest, and that hurt even more. After many, many falls, I decided I would change that and worked on developing a harness.

As I progressed in climbing, I was in Arizona—I came back from Germany, I went to school at Arizona State and climbed in the desert around Tempe, Arizona. There was this big volcanic core, south of Tucson about sixty miles, near the Mexico border. It’s a peak called Baboquivari Peak. Its got an east face on it of 1500 vertical feet, an overhang—it had never been climbed. So my buddy and I decided we were going to do it.

After five attempts, we finally got up. And in the process, I developed a climbing harness.

I didn’t know anything about sewing. I didn’t have all the background that some of these fellows here do in sewing, but I rented a sewing machine and I had a few mistakes, broke a few needles. Then I got a bartack machine, which you didn’t have to be very smart to run—you just kick the pedal, and it takes off, sews forty-two stitches and you’re done. Perfect. That’s my style.

So I had this bartack machine, and I developed this harness. I sold a few to my friends, and they said, “Gee, Bill, why don’t you go out and sell this thing?” So I thought, Well, I’ll do that. I think I’ll start a business. 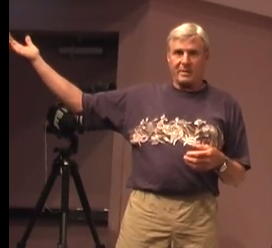 We stashed our stuff in Geneva and hitchhiked up to Norway and all around there. And that’s where I saw my first cross-country skis and heard these stories about what cross-country skiers did. That was far more romantic than just downhill skiing, at least in my mind. And I had this taste of the Alps and all these images and everything floating around in my head. So my blood was boiling, basically.

I went back to graduate school, and was a geologist. During graduate school I did enough of that kind of work to realize that this is not going to be my life. So I finally dropped out, packed it up,  and moved to Boulder.

At that time, I was very fortunate. These guys started all this stuff, and I had a place I could go to—actually had opportunities. And maybe I could actually get a job working for somebody, because the industry and the whole outdoors was so small at that time I didn’t see much of a future there, other than something like that. So I was very fortunate to move here. And I got a job working for Jim. It was a wonderful place. They were quite open. I learned a lot. I soaked up every little part of the business that I could.

And then I made kind of a bizarre decision. I’ve sort of operated that way ever since. Somehow at that point I taught climbers, and I thought, I’ve got to make a living off the poorest people in the world.