Powered by Drupal
Story by MarkErickson 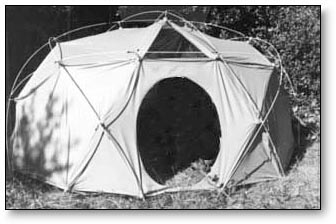 Q: Wasn't there some sort of 'harmonic convergence' involving inspiration from Bucky, you & Bruce for TNF and Bob Gillis in a van that put all the pieces into place to develop the OI?

Mark: It’s late ’73 or early ’74: a beat-up VW van pulls into the TNF parking lot at 1234 5th street outside Hap’s office.  Out tumbles Bob Gillis, his wife and their infant child, scruffy even by 1973 Berkeley standards. Bob’s been knocking on the doors at Gerry in Denver, and, we gather, pretty much every other outdoor company trying to interest them in his shelter invention, with no luck at all. Not surprising given his..shall we say, casual appearance and demeanor. 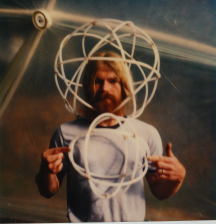 An image of Pigpen in the Peanuts comic strip comes to mind…Priding ourselves on our open-mindedness, we invite him to show us what he’s got. We get the sense that TNF is his last-ditch effort, after which he’ll retreat to his camp in the Santa Cruz forest and forage for mushrooms. To demonstrate his idea, he pulls out a piece of fabric to which is attached nails he’s bent back on themselves to form crude rings. The nails are arranged at right angles to each other at regular intervals. Bob threads some sort of flexible wand material (later, PVC tubing) through the nail “rings” and creates a flexible orthogonal grid, the whole thing held together by means of the fabric “skin”. He bends and twists this assembly to show that it can be shaped into a sort of quonset-type tent structure. We are intrigued, but not entirely sure of what we’re looking at. We thank Bob, promise to stay in touch, and send him on his way.

Credit for this early encounter goes to Hap Klopp, who opened TNF’s doors to Bob, and who had an uncanny ability to see potential in the most unlikely of individuals (of which Bruce [Hamilton] and I were prime examples!).
Prior to this encounter we had been tinkering with novel tent designs ourselves, centered on the geodesic principles of R. Buckminister Fuller of whom Bruce was an avid disciple. We were getting close, but -perhaps sensing that we needed a kick in the pants- Hap decided to add a catalyst in the person of Bob.
A wild and contentious relationship developed, as we squabbled over design, aesthetics, and later, patent issues.  As I reflect on it, I think we were focused on making an elegant, high-tech and mass-produceable design while Bob perhaps had a more democratic vision. To him, cruder, more readily available materials like visqueen plastic and PVC pipe were the way to go.
Nonetheless, Bob had a strong enough capitalistic instinct to seek patent protection whenever he could. But, as I recall, the only real novelty of his invention boiled down to the rather narrow idea of two poles intersecting at, and passing through, rings which were attached to a tent membrane. We did in fact incorporate this design element in the early versions of the OI, and paid a royalty to Bob accordingly. A couple of seasons later however, the OI evolved into a pole sleeve version. Besides side-stepping the Gillis patent, this iteration was roomier (because the membrane was now convex-curved instead of concave) and more wind worthy (because the membrane was supported along the entire length of the poles instead of simply the intersections).
Al, my memories of all this are pretty good, but probably a bit hazy in the details. I suggest before publishing you get corroboration from Bruce and ideally Hap [Klopp] (I’ve cc:d him).