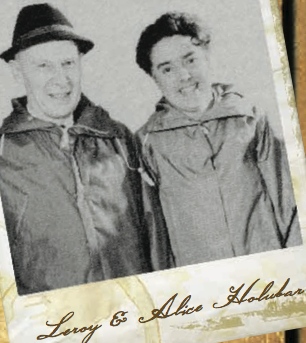 [This story is preceded by the one about Gerry Cunningham]......And the people who used gear were healing a path to the door of another Boulder, Colorado resident, LeRoy Holubar, who, along with his wife, Alice, had started a small gear company out of the basement of their home.

The Holubars went into business in 1947, as LeRoy once told us, “to supplement my grand $150 per month teaching salary from the University of Colorado,” where he taught math for 30 years.

Active in the Colorado Mountain Club during the war, the Holubars got their start in business selling surplus Army gear to club members at the end of the war. Eventually that led to importing gear from Europe, including the much sought-after Molitor ski boots and Kronhoffer climbing boots. Eventually their boot business became a bit overwhelming, and the Holubars decided to take a step back and branch out into making tents, sleeping bags and packs.

“Alice got interested in sleeping bags,” Holubar noted in an interview late in his life. “She look some of the new sailcloth that had come on the market and made bags with the baffles running horizontally instead of lengthwise. She stitched these baffles in, not through, the bag. She followed the same design with the jackets.”

Holubar’s down bags and jackets set the construction standard of the day and brought in a huge order from the Arctic Institute of North America, a move that prompted Holubar "to get my sales license and to get into business for real."

The Holubars eventually moved operations from the basement of their home to a Boulder storefront in 1962. LeRoy then quit teaching, and he and Alice devoted all their energies to the business until they sold it in 1968. [This story is followed by the one about George Lamb and Alp Sport]

08/25/14
Woody
Story Circles that can see this:
Outdoors - All Public
Primary Story Circle:
Our Newsletter