All photos for the 1972 Sierra Designs catalog were taken on location at the Bodie State Historic Park/National Historic Site in the winter of 1971/72. 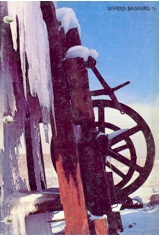 As I recall this was a very arduous trip, with lots of suffering from the cold and very difficult conditions for a catalog shoot. It was one to remember and also one of the most successful catalogs. This was the first of three years that the familiar logo did not appear on the catalogs, although it was still on the woven label for the garments.

The new logo “SIERRA DESIGNS” was done in a font style that is not here in my computer but is shown here copied from the front cover. This lasted until the logo reappeared in the 1976 catalog.  By that time there was a new director and the company was taking direction from its new owners, the CML Group. There would be no more prize-winning catalogs. It was all commercial sales by that time.

Feb-10-2016
#1
Norman Mallory (not verified)
I really enjoyed the history
I really enjoyed the history of this site as it brought back some great memories of early back packing with the gear of the 1960"s.. I have a number of old catalogs as i have saved them as the years pass by.. Ski Hut, Sierra Designs , North Face and others.. This was a great time with some excellent gear out there which stood the test of time and the Olympic Mountains.... thanks this is good.... Norman
Top