Powered by Drupal
Story by WendyWalsh 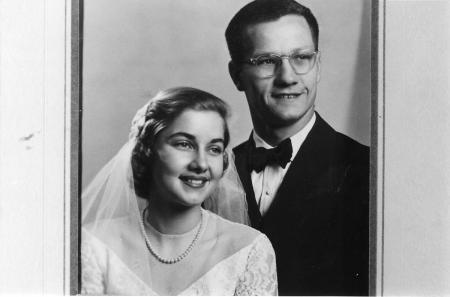 Wendy: Did you meet Ann in a class?

Tom: There were about three of us in the back row of this boring economics class.

Tom: He was a smart guy. Knew economics but he couldn't teach it worth a damn!

So, for the first six weeks we all tried to take notes and keep up with this guy. Ann was the better of us at doing that. There were two other people I [heard]. [???? ????]

And we started bringing lunch!

The [???] to class instead of trying to pay attention. Ann was still taking notes.

Wendy: But you were working on the social aspect.

Tom: So that's where we met...in the back row of...I say that's all I ever got out of that class.

Then the class was worth it.

We managed to pass for some reason.

Wendy: Did you manage to pass because of Ann's notes?

Tom Tabor: Cars as Transportation on Roads and Mountains

A Bit of Grace

Drugs and Depression in Deadwood