How The SNEWS Came to the Outdoor Industry 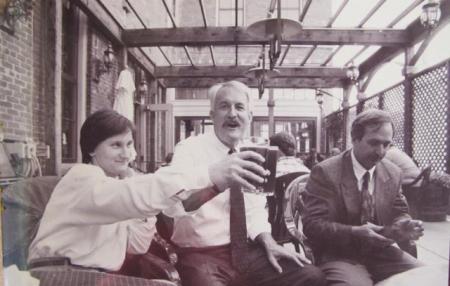 Before the revisionist historians get their hands on SNEWS and how the industry newsletter came into being, here’s the true story.

During the winter of 1978, I met Ted Eugenis on the slopes of Oregon’s Mt. Bachelor. Soon we were spending a lot of time together x-c skiing and cycling.

A Chicago native of Greek descent, Ted had lived in Eugene, Oregon before working his way over the Cascade Mountains to Bend. What he brought with him was high energy, a sharp mind and a wiliness to fight to hard for what he through was right.

With my help, Ted landed a job at NOON (National Outdoor Outfitters News), then the outdoor industry trade magazine. From there he went on to be an editor at Backpacker.

Meanwhile we started looking for a venture we could do as partners. And one night too much Ouzo at a Greek restaurant in Chicago during the NSGA  show, the idea of an outdoor industry insider’s newsletter was hatched. A week later, we decided to call the proposed newsletter Specialty News or SNEWS.

Now to sell the idea. The first person I talked to was Don Johnson a smart graduate of Dartmouth’s Tuck Business School, one of many bright young men working for Bill Danner at x-c ski maker Trak, Inc. We discussed the newsletter idea on a long New Year’s Day ski tour into Oregon’s Broken Top Crater.

Johnson didn’t think the idea was sound. In fact, he called it a loser which made Ted want to do it even more. So we mailed out letters to a couple of hundred retailers offering them the chance, for $100 annually, to get the inside information, hot tips and gossip every month. Enough signed up and so it was a go.

A go on orange paper with black printing because that combination, while ugly, was impossible to photocopy.

Issue number one set the tone: irreverent, caustic, funny, hard hitting. In that issue we took Asolo boots to task for faulty telemark boots. We went so far as to call Asolo’s U.S. representative Bruce Franks “The Whiner”.

Franks was pissed; people called saying “sign us up.” We did and later mended fences with Mr. Franks but the tone was set-we didn’t pull punches.

After several months, manufacturers and suppliers began signing up. They wanted us to start testing their new products. So we announced that we would do gear and apparel tests but only use “Average Human Beings” (AHBs) for all tests. No pros, no sponsored athletes, no shills just the straight scoop from everyday citizens who enjoyed outdoor sports and recreation.

Our first test was Gates' new Gore-Tex gloves. We were discussing who to give them to when Ted said, “wait, I know, let’s put them on the hands of Chicago garbage haulers in the dead of winter.”  He did and the results, while very positive for Gates, gave SNEWS a lot more cred.

And so the newsletter (called by George Salomon-he of ski gear manufacturing fame-“le papier orange. C’est tres amusant”) gained steam and grew to have subscribers world wide by its tenth anniversary.

And now to the some of the highlights from SNEWS’s first twenty-two years.

Finally to give you a sense of style, here are a few sentences from our response to an e-mail from Jack Gilbert in September 1999 re show coverage.

“On reading your FAX. I was resigned to writing a ‘sorry about that’ publisher’s letter. But the more I read it, the more incensed I became.  Quite obviously, you have underestimated me and made a serious claim against my creditability. I won’t let that pass lightly.” Off to a rousing start eh?

Moving along, “Here’s what goes on re show coverage. I tell my reporters to give me their take on the show. They trust the fact that what they say will not be watered down to please people they think need pleasing.”

“If the game is now to placate and kiss up to subscribers and keep a scorecard of who gets mentioned, then I’ll cease publishing.”

O.k., so Jack vented, I vented and we remained friends and SNEWS kept on publishing.

09/14/15
Woody
Story Circles that can see this:
Primary Story Circle:
Outdoors - All Public
Our Newsletter

Escape from the SIA: ORCA then OIA