How did Sierra Designs name its sleeping bags? 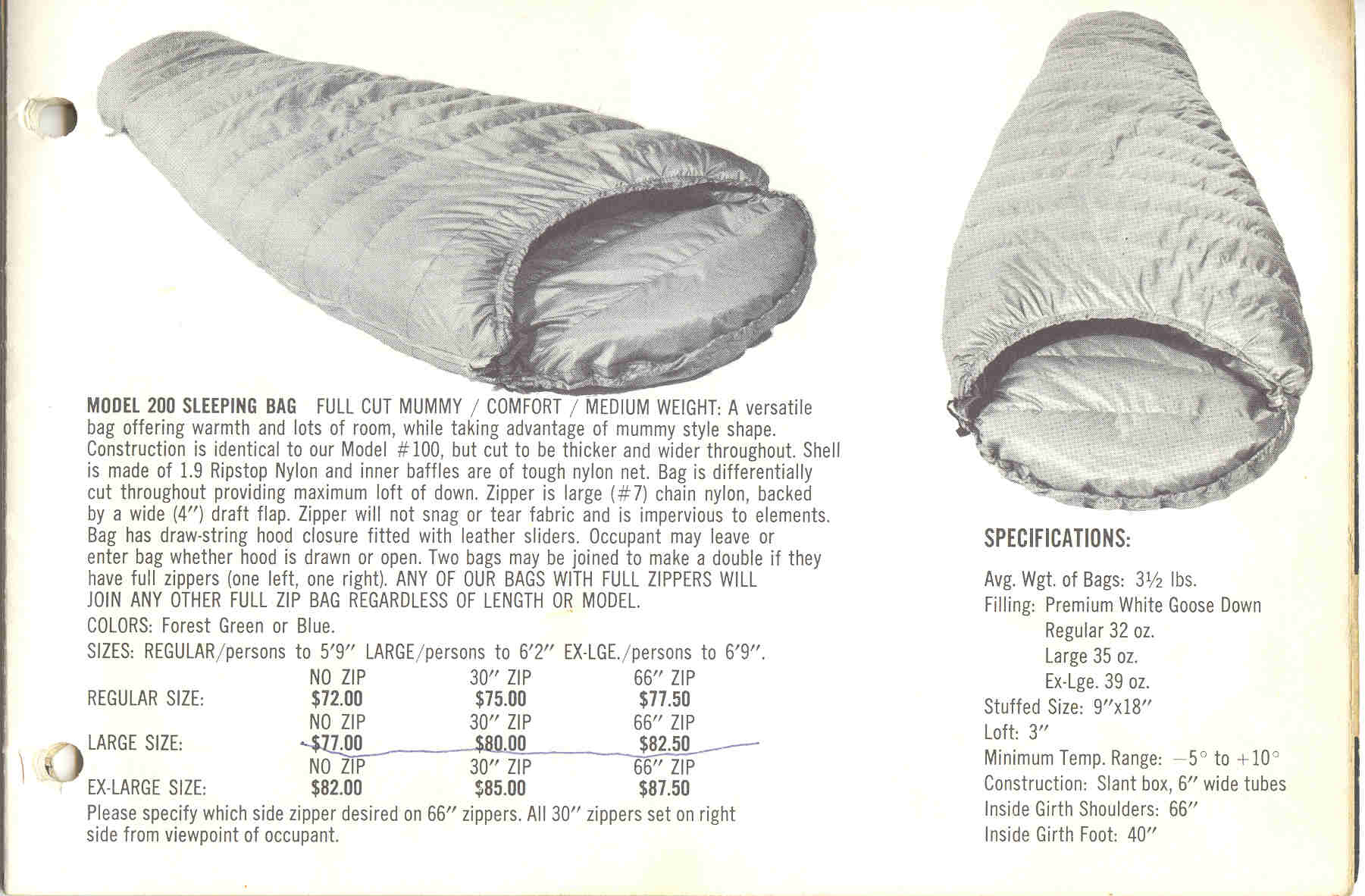 During the development of the first sleeping bags, Bob Swanson came to me one day early in 1966 as I was just getting started on the patterns. He asked me what I thought we should name the bags.

At that time many sleeping bags were sold under a variety of names. Making the sleeping bag patterns meant that I had to write a style number on all of the many pieces, such as IB (inside bottom) OB (outside bottom) IT (inside top) and OT (outside top). In addition there were other pattern parts for the draft tube and draw cord tunnels. To add a style name to all of this was just a bit more than I was willing to do. So I answered with “How about 1, 2 and 3?” (for three main styles we were developing). He countered with, “Well then, how about 100, 200 and 300?” That was fine with me, as it worked well for all of the pattern marking I had to do.

It is still something of a mystery to me how those names stuck for so many years with so little variation on the same numbers. They did get some modification later, such as the “200 Perfect”.  At any rate the bags were all winners and continued to be until 1978 when they were knocked off (in Hong Kong) and sales plunged to almost zero. That was the time our sales manager of the day wanted to get out of the sleeping bag business and I refused to let that happen. That was the motivating force behind the high-end Cloud Series sleeping bags—Cirrus, Cumulus and Nimbus. My thoughts were that if we made them expensive enough, no one would want to copy them. They didn’t for a long time, and in spite of the high cost the sold very well.

Sep-10-2016
#1
Dennis Young (not verified)
My Sierra Designs 200 Perfect
My Sierra Designs 200 Perfect was my first down sleeping bag, purchased from the Sierra Designs store in Berkeley. After many years of backcountry use it is now a frontcountry bag. Still plenty of loft, no tears, and lots of memories of backcountry trips throughout the west. I have an assortment of newer down bags, but none beats the shoulder room of the 200. Honored to have owned a piece of backpacking history.
Top
Jan-29-2018
(Reply to #1) #2
Homer howzit (not verified)
May I ask what color it is? I
May I ask what color it is? I have a red bag with blue trim and white interior I would like to do some research on. Thank you for any help
Top

2nd Sierra Designs Catalog: Up in the Arctic, and Up in Smoke