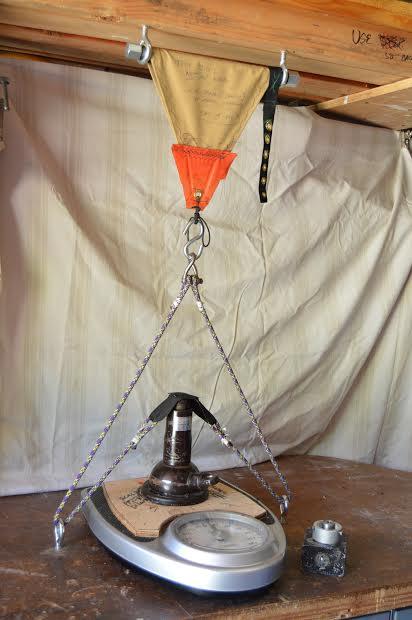 [Admin note: Check the info on expoxy toxicity below. Also, just added this link to reddit MYOG...it seems like this info should migrate out from here. Hopefully that will help. Redditers, if you've got a good place to cross post this, feel free. It's all Creative Commons with attribution copyright to Phil.]

My grommet testing is slowly progressing in a rather glacial manner, but all the results tend to point an accusing finger at those of us involved in equipment production.

With the constant hurry to meet schedules, we never actually did any significant component testing. Field-testing, although ultimately required, is no substitute for exploring the actual limits of ones supposed "knowledge".  One can skate pretty close to the brink without ever discovering the margins!. Yeah, a tent holds up to 100-knot winds. So what?  What happens at 120-knots?  By testing components, as opposed to the total package, weak points can be detected before someone dies.  Snuff-testing isn't politically correct.

Of the lot of us, only Bill Holmes actually tested the bloody components!  Even there, his testing was of a totally rudimentary nature: he just "sort of wiggled them with pliers".  At least he tested them, not blindly accepting common misconceptions.

Anyhow, now that I'm retired I'm actually doing what I should have done in the Sixties.

Mind-sets are easily passed on from one generation to the next. Since we all "knew" the results, no one actually tested the assumptions.  Every reasonable designer 'knew" that heat-sealing holes, prior to grommeting, resulted in much stronger setting.  Now, after having found out through testing just how marginal the advantage was, I wonder how such a silly concept could have been passed on.  In retrospect, the affected heat-sealed margins were almost too small to be significant. 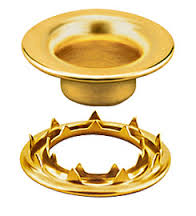 A number of things have become apparent.  Epoxy-setting of all grommets is essential for optimal strength/durability.  This isn't "maybe"!

It is interesting to note that the only two grommets we trusted in the old days -- I sound like a codger! -- were the Stimpson #00-plain and the domestic #0-spur with rolled rims.

In the testing, there turns out to be strong support for our prejudices.  The only thing we had dead wrong about both of these was that heat-sealing the grommet punch-holes gave a significant advantage.  Not really, at least with the stable fabrics & webbing we used. Our substitution of viscous-epoxy setting, to avoid the noxious vapours of heat-sealing synthetics [at the cost of poisonous epoxy vapours] was viewed as a convenience.  We couldn't have been further off-target!  Where heat-sealing proved to be a waste of time and effort, careful epoxy applications yielded a quantum-level improvement.

[Also, see comments for info on toxicity of epoxy, etc.]

Rather than testing all grommets for strength [as set], it's probably best to focus on the various anticipated functions they must match. Although it's academically interesting to test the strength of #00-plain & #0-plain grommets -- both with, and without, epoxy-setting [and assuming appropriate backings],-- the information is moot when applied to their respective functions as entry/exit points for draw-cords.  For this function, the only caveat might be to avoid leather backing since freezing of wet leather reduces it to breakable pieces.

On the other extreme is the use of spur grommets in the suspension
systems of packs.

In this case, the roughly 100# yield of non-epoxied #0-spur grommets is skating awfully close to disaster!  Spread out over two grommets, in use, isn't the real issue.  The probability of catastrophic failure of a single grommet, on heaving the pack onto ones shoulders, is the real concern.  As a casual surge test, I yanked my day-pack -- loaded with 25# of wine bottles -- onto one shoulder. Starting with 210# static weight, there was a momentary surge to 250#. This was purely indicative since I'll need someone else watching the scale as I repeat the exercise, but a 1.6G surge isn't to be sneezed at.

Assuming that the figure was at all accurate, a 70# pack, donned the same way [as opposed to lifting the pack off a rock or stump] would come to 112#, slightly over the tested strength of an o-spur grommet set raw into Mil-spec 1" webbing.  Since the crappy webbing now available isn't up to that specification, we're into marginal territory.  In this case, the 350#+ epoxied test [on Mil-spec webbing] is unquestionably needed.  Historically, there have been suspension failures, admittedly not terribly common, but very traumatic when they did occur. The margin of error is just too small: variations in backings make the 100# test value merely indicative of a nascent problem.

Intermediate requirements are usually perfectly-well accommodated by non-epoxied #0 spur-grommets, the traditional standard.  Using plain grommets. without testing for suitability, is asking to be reamed.  If any real stress is anticipated, plain grommets should only be used with careful epoxy-treatment and suitable backings.  In the past, we never used them except for draw-cord exit points.  The prospect of many unhappy returns was too daunting to be risked.

admin
Offline
Joined: 02/22/12
Phil Scott has been testing
Phil Scott has been testing and refining our common assumptions about some typical materials and fabrication techniques. This isn't really in the 'story' mode but I think it should have a home online anyway and I'm happy to provide one. Anyone working on a DIY tarp structure, for example, would benefit from Phil's work. Initial tests provided some preliminary conclusions and led to the design of better testing equipment...there's a picture of that to the right and in more detail here. Here's Phil's intial assessment; from here he has gone on to test different grommets, different grommet and fabric combinations, and so on. Those results will follow in time. As Phil points out, "A subject that has effectively been ignored for a couple of generations can wait a month or so."
Top
Apr-22-2016
#2

adminzard
Offline
Joined: 07/17/13
Epoxy Toxicity: In
Epoxy Toxicity: In conversation with Phil, he notes, "Merely pointing out that epoxy is very toxic should cover the matter, A reference to the appropriate California.gov website, as well as stressing that "dose makes the poison", would be quite sufficient. It's one thing to carefully use the epoxy -- and I definitely would do so for any spur-grommet used in pack harnesses -- but exposure of any employees to the toxin is morally questionable." There's a good article on epoxies in Wikipedia: https://en.wikipedia.org/wiki/Epoxy These folks have a good write up aimed at selling industrial ventilation systems: http://sentryair.com/blog/health/hazards-of-epoxy-fumes/
Top