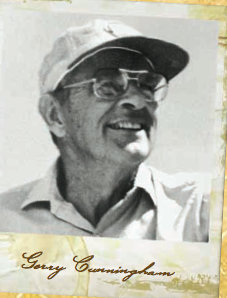 Just as George Rudolf’s trailblazing career as a retailer, importer and manufacturer was starting in 1935, so too was the design and manufac­turing career of Gerry Cunningham, a continent away in New York slate.

“I was in high school, an avid skier, and unhappy with the way an ordinary rucksack swung around on my hack when I skied,” Cunningham said. “So I designed a nice flat pack that would stay close to the body.”

Next, he started making and selling climbing skins and was planning to become a full-time designer and maker of ski gear when the United Slates entered World War II.

“I was fortunate enough to serve in the 10th Mountain Division. I used to lie in my little old mountain tent designing equipment with my buddy Bob Schwartz to pass the time.”

At war’s end, Cunningham was back in Utica, N.Y., with his wife, Ann, making rucksacks and climbing packs and writing a regular column for the National Ski Patrol magazine. “In return, I asked for their mailing list,” he said. Armed with that list and later with the lists from every mountaineering club in the United States, the Cunninghams went into the mail-order business as Gerry.

Thirteen years in Boulder went by before Dale Johnson (founder of the Frostline kit business) became the Cunninghams’ partner in 1959, and in 1961 George Lamb (later of Alp Sport, Alpine Designs and Camp 7 fame) joined Gerry to oversee sewing operations.

Looking back on the ‘50s and ‘60s, Cunningham once said, “This was the golden era. Ann and I traveled all over the country and tested our gear on bike trips, canoe trips, horseback trips, etc. The only reason I went into business in the first place was because nobody was interested in my stuff except the people who used gear.”  [The next installment is about Leroy and Alice Holubar]