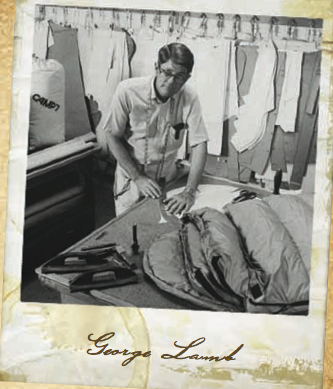 [This story follows Leroy and Alice Holubar:  Holubar.
And all about Camp 7 here.]

As the Holubars were winding down ownership of their business, another member of the group of Boulder outdoor pioneers of the ‘50s and ‘60s, designer and sewing ace George Lamb, was ramping up yet another new outdoor gear and apparel venture.

Lamb’s interest in design and manufacturing dated back to childhood when he made a pair of holsters for his new cap pistols. In the process of turning out his first product, he ruined his mother’s sewing machine but gained valuable experience.

From shooting cap pistols, Lamb progressed to dreaming about climbing, but there weren’t many climbing opportunities for a kid living in Indiana. That changed when his parents died and he went to live with an uncle in Oklahoma and attended summer school at the University of Colorado.

Eventually, he enrolled at the University in 1951. “After three or four years of rock climbing in Colorado. “ he noted in an interview 15 years ago, “I got more interested in mountaineering. There wasn’t any good gear available unless you waited months to get it from overseas, so I started building my own. That’s how the first Eiger pack came into being.”

Upon graduating from the university, he joined the Army’s Mountain Training Command (MTC), which replaced the 10th Mountain Division after the war. “1 skied, climbed, instructed.... It was terrific,’’ he told us.

Terrific, but the fun was cut short by a skiing accident that saw him reassigned first to run the craft shop at Fort Carson, Colorado, and then to the bigger MTC craft shop at Camp Hale, Colorado. At Camp Hale, Lamb used the large craft shop indus­trial sewing machine to make packs for the Holubars.

Discharged from the Army, he supervised the sewing line at  Gerry, but soon became discontent and went back to school on the Gl Bill. In his spare time, he started Alp Sport.

“Alp Sport started in 1960, and when I graduated in 1964, I faced the choice of finding a job or making Alp Sport grow. So I gave myself $75 a week and opened an Alp Sport shop,” he said.

Alp Sport’s unique products, like the Normal parka, the first down-filled ski parka with no stitches in the smooth outer shell, were immediate successes.

The Normal parka’s success got the attention of Massachusetts-based Alps Sportswear, who asked Lamb to change his company name. He did. Alpine Designs became his apparel label, and Alp Sport remained as his hardgoods label.

After selling his company in 1969 to General Recreation, Lamb stayed on as a consultant but eventually left to form yet another company, Camp 7, in July 1971. 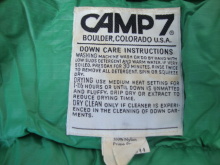 Camp 7 had a mete­oric  rise,  netting $4 million in sales in its first year in business. Over half of the sales were to the Japanese market, but when that market suddenly dried up,  it  left  Lamb in debt and forced him to close the company down.

Looking back at that time, Lamb noted in 1991 that he still saw a lot of people wearing Alp Sport and Camp 7 down jackets. “We produced great products designed to last a lifetime.”

[This story follows Leroy and Alice Holubar:  Holubar.And all about Camp 7 here.] As the Holubars... Read Story
Camp 7 Employees Through the Years

I've been getting comments from Camp 7 customers (still using the gear decades after purchase) and... Read Story

admin
Offline
Joined: 02/22/12
Nice! That's how we need to
Nice! That's how we need to keep building them.
Top
Jan-30-2017
#3
Paul (not verified)
Still have mine that I bought
Still have mine that I bought in '74 and wear it to work outside in the winter. Great coat and nothing beats it for warmth
Top
Oct-10-2017
#4
Samuel Berman (not verified)
I have my mother's 1978 Camp
I have my mother's 1978 Camp 7 sleeping bag. She used it to travel the world then, and between 2015 and now i have as well. Still works perfect and is in incredible condition given how hard it has been used over its lifetime. The stories it could tell.....
Top
Nov-17-2017
#5
Stephen Green (not verified)
I just spent a weekend at
I just spent a weekend at Yosemite, comfortable in the 30 degree morning temperatures in the Camp 7 parka that I've had since 1979.
Top
Nov-25-2017
#6
Dennis Bell (not verified)
My wife and I bought our Camp
My wife and I bought our Camp 7 sleeping bags shortly after we were married in October of 1972. These bags are made incredibly well and both of our bags still look brand new. They bring back a lot of good memories when we did a lot of backpacking back in the day.
Top
Dec-14-2017
#7
keith telluride (not verified)
I worked for Camp 7 as a
I worked for Camp 7 as a pattern making assistant and fabric cutter and tent inspector. George Lamb was too high up for me to know, but the pattern maker, name I do not remember really helped me with technical knowledge. I took what I learned to NYC where I draped dresses for the TV show Dallas then the skills kept me alive at the summit of Mt. Everest in a down suit I designed and sewed. The riches of an American entrepreneur like George Lamb spread wide,helping me and others.
Top
Dec-21-2017
#8
Alice B Davenport (not verified)
Leave a Comment. (Please,
I just wondered if Camp 7 was still in business. I worked as a seamstress in the mid-70s, My late husband, Bob was a janitor there. At that time we did not make tents. Four years ago, a man came to my alteration shop with an old orange Camp 7 jacket for me to repair, said he found it beside the highway in Washington state many years before and had been wearing it ever since. I instantly knew it was a Camp 7. This was in New Mexico. At that time George Lamb worked every day and was frequently on the floor checking on things. Very accessible person. Leroy Banton was the plant manager.
Top
Nov-08-2019
(Reply to #8) #9
Marilyn S. (not verified)
I found this while searching
I found this while searching for some information about having my bag cleaned. It is an old Camp 7 and it is still amazing. Thank you for your amazing work.
Top
Jan-20-2018
#10
David (not verified)
Mom bought a Camp 7 down
Mom bought a Camp 7 down parka in 1979 for a ski trip to Tahoe. I wore it all through college, '90-94. Just pulled it out for a trip up Mt Shasta. It's as good as it ever was - it may outlive me!
Top

03/20/18
Woody
Story Circles that can see this:
Outdoors - All Public
Primary Story Circle:
Our Newsletter