Conspiracy for Quality - The North Face Pioneers the Testing Lab

Powered by Drupal
Story by DanCastner

Al Tabor: So you started to say something.

Dan Castner: So, this is a little known industry changer and I've always wanted to talk about. When I got hired by TNF in '1974 they already had a down lab. The down lab could inspect for species, content and loft.   I was working on piece rate in the finishing room making $2.25 an hour.  After a few months I was promoted to supervisor and then within the year I was made QC manager.  Shortly after that Hap Klopp said he wanted to build a fabric testing lab.  There was not much to go on and very little detail as to how to build this lab. Hap did have specifications for down proofness, water proofness, tear strength, water repellency and such that he obtained from Frostline Kits.  So I had all these results you were supposed to get when you tested the fabric but no idea what machines provided these test results or where to get them. None of us had any background in textile science since we all came into the business because of our love for the outdoors and wanted to get involved in the manufacturing or outdoor products. I didn’t know where to begin because you could not simply Google it back then. 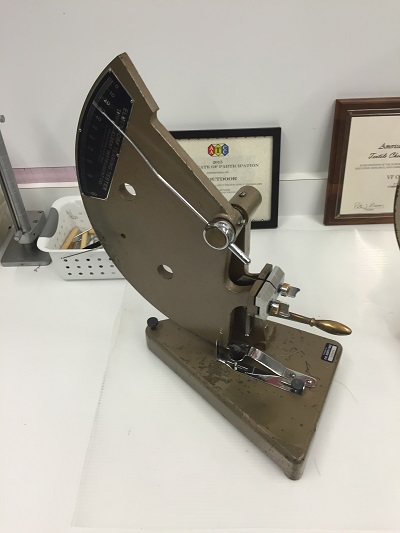 What I found was that I was able to get scraps of imformation from the old “garmentos” back in New York and other textile companies that were mostly on the East Coast.  These were the people from who we were buying our fabrics an trims. Also it’s important to note that prior to the outdoor craze that begun in the 60’s they were making fabric for wearing to cover the body and not fabric that needed to protect the body and materials that housed people (tents) and carried their supplies ( backpacks). Waterproofness, tear strength and downproofness was not in their vernacular. It was new to us as well, all of these leftover and new materials, such as aluminum and ripstop that came out of WW2. New lightweight and sturdy materials were available.

Al: Or wicking or any of the stuff that came after.

Kevin Smith: The space program. That gave us the light-weight.

Al: And then well parachutes and things like that.

Dan: So I started finding out about the machines. In fact, on the 50 Year Anniversary tour of The North Face I saw three of the machines that I'd bought: the tear tester, Mullins hydrostatic tester and the Frazier CFM tester.

Kevin: Still there and still being used. 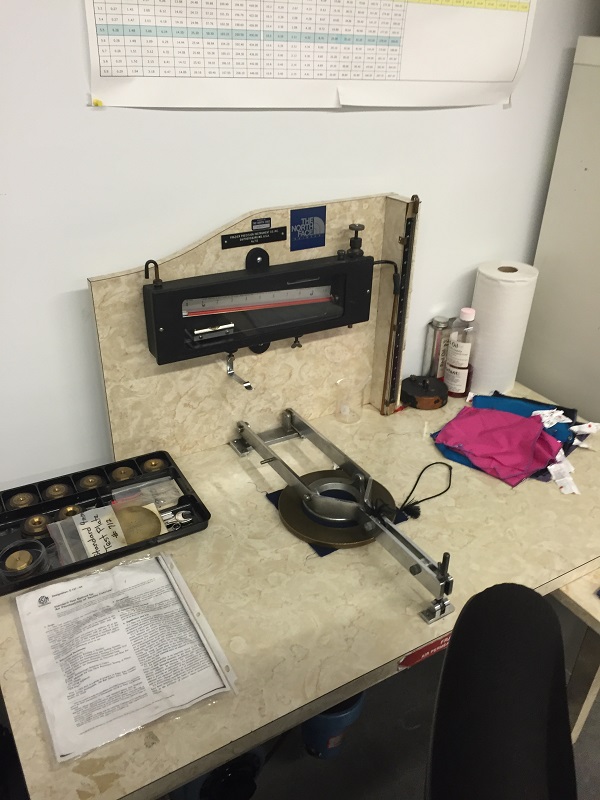 Dan: And so I started digging in and I started getting this equipment and we built our own fabric lab in a little area below the down lab.  We started inspecting the fabric. The fabric would come in and we would check it and if it would meet our specs.   We discovered fabric that did not meet our specs so we rejected it. Because of this we found that at times we would have to shut down production. In the beginning we shut it down a lot.  I remember Louis Padella, head of production, would come into the lab angry because had to shut it down and let people go home for a few days until we could get replacement materials.  I was like too bad but we can’t use inferior materials.  Klopp would always back the lab results although it hurt when we could not meet demand.

And the turnaround on fabric took weeks and weeks and weeks. So the garment people started saying, “You're the only people rejecting.” Of course we were, because we built the very first fabric lab in the industry.

Eventually I met somebody from Patagonia and he introduced me to the woman who was running the QA. I said, “You know. I can set you up with everything you need to make the quality lab for textiles. I have all the information, So we helped set up the lab for Patagonia. And guess who came next? Marmot.  So it took a year or 2 to do all this. It wasn't just overnight. They started rejecting. So what happened when they started rejecting and we were rejecting, the industry got better. It was one of those unknown things, a little quiet thing over here in the corner of the industry.   It wasn't just North Face alone that could get it done but if you pooled in other notable companies then the quality of materials became consistently better.  We couldn’t share designs but we could share the quality thing!

Kevin: And you know what, Hap supported that stuff.

Dan: Well, Hap got to me and said, Dan get it going. He gave me 6 months to get it done but it actually took a year. It was hard finding the right testing equipment and it was not cheap.

Henry Gruchacz: You also had that lifetime guarantee, too. So it made sense.

Dan: We had the lifetime guarantee. I took over the warranty department and I saw the results of putting out products that did not have material tested prior to cutting and sewing. The lab changed all of that and virtually eliminated returns due to inferior materials.

Al: Everybody's got to have it.

Henry: Remember the guys that would go and stay in the Sierras for 2 years they'd bring a Parkas back.

Kevin: And we’d give em a new one!

Here's a more complete version of the story. A transcript of the audio is below that. After I... Read Story
Henry Gruchacz - First Days in the Outdoor Industry

top [This is a work in progress. It might stay as one story or turn into half a dozen.] 00:00 –... Read Story
Conspiracy for Quality - The North Face Pioneers the Testing Lab

Transcript: Al Tabor: So you started to say something.  Dan Castner: So, this is a little known... Read Story
Let Me See That: Cordura Gets Discovered by Henry Gruchacz

Transcript:  Al Tabor: Ok so Cordura. We've got to hit Cordura before everyone totally runs out of... Read Story