It's a bloody cagoule, for Christ's sake, not a fashion item! 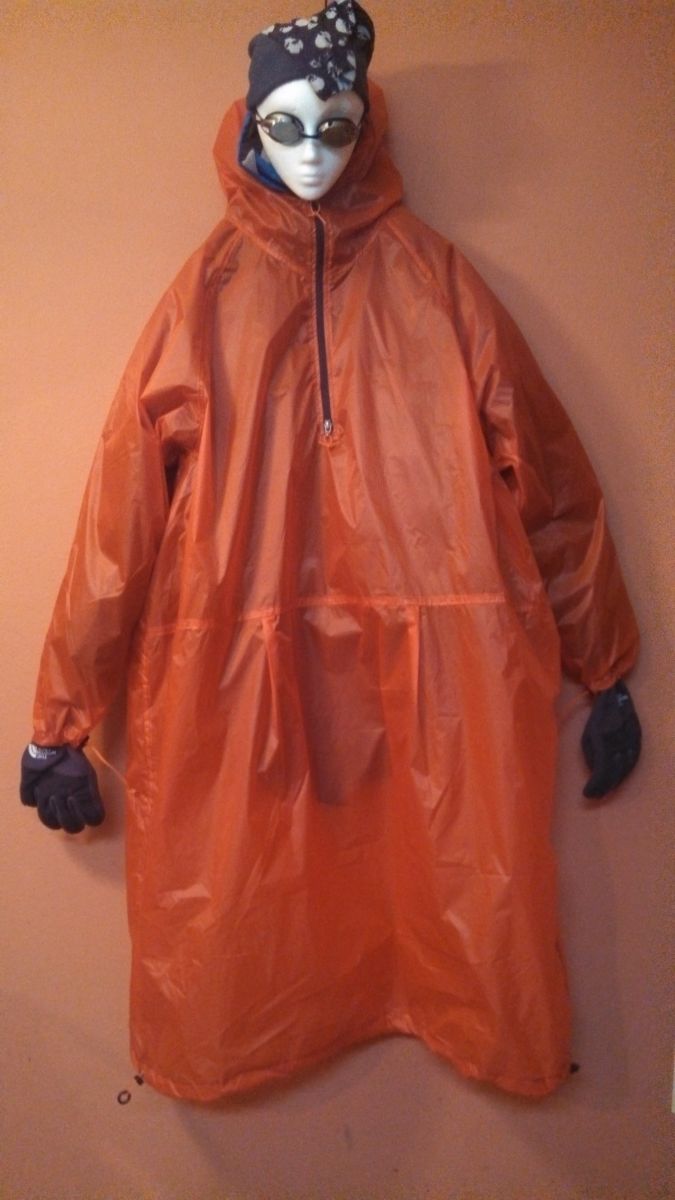 A real difficulty, in maintaining the fundamental characteristics of what I personally consider to be a "cagoule", is over-design at the expense of economy, durability, weight and bulk.   Stripped to its essentials, the base garment is viable.  Their disappearance, at any given time, is largely due to misplaced efforts to "improve" them, these almost always resulting in compromising essential features. Throwing economy to the winds, "improved" cagoules should be called something else to avoid confusing the matter.  The considerable yardage needed for constructing even a small garment precludes pricey fabric such as Goretex!.  It would be possible to make the hood and the upper front yoke [but not the back-yoke, for reasons of durability] out of such fabric, but it would still be overly pricey and not as durable.;

Colour is another matter, entirely.  The Norwegian army cagoules, used in the WWII Resistance, were necessarily white -- for obvious reasons.

My uncoated Force 9 rip-stop version, a second copy subsequently given to Robert for testing, was granite-gray and ideal for evading park rangers.  However, being somewhat heavy [as well as being uncoated], it was best limited to winter usage when rain wasn't a consideration.  As such, it was given to a chap from the Yukon. Overall, I suspect that orange is the best colour for guided climbs: a bright orange would be useful in maintaining visual contact with paying customers. . . . .   Add reflective strips for bicycling and jogging in the rain.  Incidentally, since I gave Robert a series of cagoules over the last decade, any comments he has must be tied to the appropriate one-off.

One aspect (of the prevailing cagoule designs of the 60's & 70's) was the user-demand for chest pockets. I can remember very few occasions when I ever saw the bloody pockets used [and those usages were rather foolish: storing your lunch in a chest-pocket in bear country has its draw-backs. They were de riguer, never-the-less.  I ranted and railed against them as a stupid waste of material & labour -- not to mention their disruption of fabric integrity -- but the obvious answer rather missed me. Make them redundant.

This omission is more understandable when I consider my distrust of the zippers of the time -- the Crown zipper was too heavy & expensive and the others were too prone to failure. However, with Robert's prodding, I finally conceded that available coil-zippers had reached the level of those made by Optiwerke and Riri. By adding a throat zipper, some ventilation was achieved, but [more importantly] the hood could now be refined in shape to allow a better fit and a bit more fabric economy. By assuring that the hood could still be pulled over my head [in case of zipper failure], the concession was acceptable.At that point, further prodding led me to add a few more inches, 6 or so, to further improve ventilation. When I finally set about putting the cagoules to bed, having patterned ten or so to suit changes in fabric widths [and personal whims], I realized that another 3" increment [linked with a secondary zipper slide to permit opening the zipper from the bottom] deftly removed any argument for a pocket! The under-lying garment [usually a mountain-parka] could now be accessed, making a cagoule pocket redundant.

I could go into my reluctant concession of sticking to raglan sleeves, a design-tweak that was made economically-palatable by adding a center-line top-seam [and so forth], but that's for another time.

As far as cagoules are concerned, I've basically signed off with my latest rendition. It works well as built, it has resolved the pocket issue, it's aesthetically-acceptable [read "raglan sleeves"] and its economically scalable. Good nuf!  It's a bloody cagoule, for Christ's sake, not a fashion item! . Further commentary isn't needed, above and beyond, what users [read "Robert"] have to say. Since I've decided that it's as far as I plan to go, any further design tweaks will have to be done by someone else. If they can maintain the functional level of my last foray -- without increasing the price! -- more power to them. Any commentary on fit, however, will have to take grading into account. To quote Al Steck,,"It fits me!" Since Robert is several inches taller than I am, the cagoules he received will automatically be 2" inches too short and a bit too snug.

Sep-25-2014
#1
Quest Bars (not verified)
Add new comment | Outdoor Industry Underground
Article writing is also a fun, if you be acquainted with after that you can write otherwise it is complicated to write.
Top
Apr-24-2016
#2
C. Curtis (not verified)
The irony is not lost on me,
The irony is not lost on me, but funny to come to the realization while reading Phil's articles (I can actually hear him rasping them word for word in my head) that they make me feel, well, a bit nostalgic... Keep at it Mr. Scott!
Top

08/26/14
PhillipScott
Story Circles that can see this:
Outdoors - All Public
Primary Story Circle:
Our Newsletter

Robert Link on the Cagoule