Powered by Drupal
Story by BruceJohnson
[Bruce Johnson has chronicled the early Outdoor Industry in pictures and text in his History of Gear Project. He talks about the Holubars and their company here.
He also has a book about the same topic. It's highly recommended...full of wonderful pictures in addition to providing an expanded history.
What follows are a few short excerpt from the website. All images, text, and links are from there and copyrighted by Bruce.] 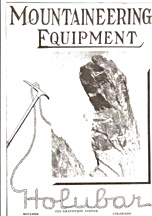 In Boulder, Colorado, Alice and Roy Holubar officially opened for business in 1947 by purchasing a business license. Roy was also known as LeRoy Holubar. He and Alice had met as Juniors in High School, and were fellow students at Colorado University (CU). Pictured left is the front cover of the 1950 Holubar catalog.

Holubar Mountaineering co-holds with GERRY Mountaineering the title of the very first of the innovative outlets for modern American-made climbing/camping gear in the United States.... In fact, Jack and Joan Stephenson of Warmlite were inspired personally by the Holubars upon the occasion of their 1955 honeymoon trip to Rocky Mountain National Park in Colorado. The couple had suffered through a cold, miserable trip until Roy and Alice took the youngsters into their Boulder home and "turned them on" to custom down gear of the highest order. The Stephensons returned to California inspired, and began their own "business in a basement". 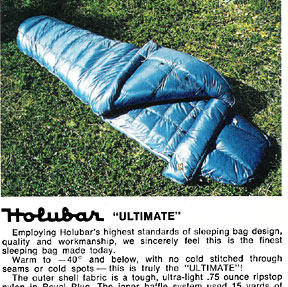 Alice Holubar, as one of the very first people in the USA working in nylon and down, created designs and set standards for everybody who was to follow. Among the firsts Holubar can claim are the invention of what we today would call the first modern lightweight, nylon-shelled down sleeping bags. Alice gradually perfected bags that draped the sleeper in a wonderful warm embrace due to the use of a purposefully non-differential cut. Alice also perfected the use of the "V" baffle and longitudinal baffle construction. Such inner construction, coupled with a near-insane devotion to quality and customer service made her bags legendary among those in the know. Coupled with the innovative down-filled collar (the "Holubar Collar"), Holubar bags became the preferred choice of many early Himalayan and Alaskan mountaineers during the 50s and 60s (before most of the big-name Companys like North Face or Sierra Designs had even opened their doors.

As a poor college student in 1972, it took me (the author) a long time to save up enough money for a premium down bag, but when I finally had enough, the choice was clear, and I purchased one of Holubar's premium down bags, in a winter weight, for $137.00. Its 1.2 oz. ripstop nylon shell was a beautiful blue, and it was so sensuously soft, puffy and WARM that I left it out unpacked in the living room just to find excuses to feel it on a daily basis....Its name was "Royalight," which I found out years later was an acronym for "Roy," "Alice" and "lightweight." It was the perfect name choice for such a sleeping bag-- it was very light and it was worth a King's ransom and it was a bag to treat royalty with, oh, and it was a royal shade of blue to boot......I miss that bag! 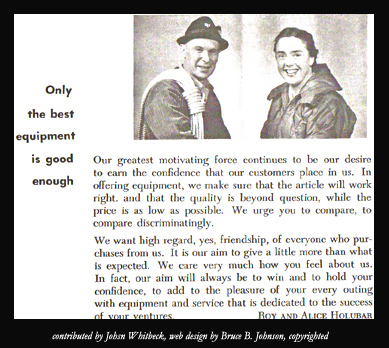 In the Holubar home, Alice, a brillant woman with a Master's degree in German, was "the brains of the outfit," according to Lou Barnes, who was the Company’s marketing Manager 1973-78. The image to the left is from the couple's 1950 catalog, which was their first real catalog (prior to that “catalogs” had been mimeographed sheets and the like)......Sometime in the early 1950s, Alice began to design and sew and sell featherweight sleeping bags that were quantum leaps ahead of what other American camping firms were offering. She used the best quality down and enclosed the fluffy stuff in the cutting-edge modern new shell material called "nylon," at first a luscious type called "French" nylon,and later very lightweight 0.75 to 1.5 oz. ripstops... Many detractors worried that the lightweight new material wouldn't be strong enough, and others were sure it wouldn't be downproof, but gradually over the years the detractors became believers, and by the late 60s everyone was packing sleeping bags made of nyon. At first Alice sewed with nylon that was war surplus parachute cloth for the baffling, and luscious "French nylon" for the shells. In later years she used modern ripstop nylons.
Roy, who was a math professor in the Engineering Department at Colorado University, had gotten a business license in 1947, and had been importing European gear like Molitor brand boots, and many items of climbing hardware; eg. Salewa, Grivel, and Stubai. He, also, distributed more locally produced product. Roy has claims to fame in the early history of gear quite apart from his wife. He was instrumental in providing climbers access to what we today know as Vibram soles. In fact, he talked the Goodyear Rubber Company into the first USA-based production of such soles circa 1950. He also worked with Bob Bruning, a local blacksmith, in forging what was probably the first widely-available, American-made piton hammer, years before Yvon Chouinard began selling Chouinard hammers from the back of his car in Yosemite. Also, iIn those very early times, circa 1950, Roy did not like Goldline rope, and instead supplied his customers, especially Mountain Rescue, with a made-in- America white, laid 3-strand rope named "Columbian."

May-28-2015
#1
John (not verified)
Dear Mr. Johnson and friends:
Dear Mr. Johnson and friends: I still have my Houlubar Royalight winter weight bag with liner. Weighs about 4.8 lbs without stuff sack. Either myself or my wife have used it backpacking and camping in the Colorado Rockies over the past 35 years. Before that I used it on 4 season Colorado climbing and backpacking in the 1970's. Mine is in perfect shape. Always used the liner and often either a lightweight nylon cover or a full bivy. I also still have a Holubar synthetic bag which I used for motorcycle camping trips. I am about to purchase a new light weight 3 season down bag and sure hope I can find one of the same quality of the Holubar. Great to see a site dedicated to the history. My backyard is the San Juan Mountains and my house is at 8,000 ft. so I know the value of a warm and comfortable bag. At 66 I can still sling on a pack and head out; just not as fast or far as I use to go in any one day.
Top
Nov-01-2017
(Reply to #1) #2
bob (not verified)
I have the same bag. I
I have the same bag. I bought one with a buddy many years ago. We purchased with opposite side zippers so if we went out on a camping date with a lady, we could borrow each others and zip them together to make one giant bag. I courted my wife that way with some Drambuie, a Goya 12 string guitar and double Holubar's zipped together, It worked! We are still married 38 years later.
Top
Oct-05-2016
#3
Eric O (not verified)
Great site. I would love to
Great site. I would love to see the old catalogs online. I was a poor Boy Scout back in the 1970's and drooled over the catalogs for Holubar, REI, EMS, Frostline, etc. Couldn't afford Holubar but I knew they had great stuff. I sewed a lot of Frostline kits: 60/40 parka, tent, booties, anklets. Had a ball winter camping in Boy Scouts in Northern Virginia.
Top
Oct-05-2016
(Reply to #3) #4

AlanTabor
Offline
Joined: 03/23/12
Hi Eric,
Hi Eric, I was also a poor Boy Scout (but back in the 60s) drooling over catalogs. We actually used aluminum electrical conduit and a conduit bender to make frames we could attach out canvas packs to...and it worked more or less. Thanks for your comment. Catalogs are getting scanned catch as catch can. George Marks of Sierra Designs sent us his scans of the first 7 years and I scanned a Patagonia catalog on my own. It's too labor intensive to get systematic about but if anyone has scans they'd like to share, we'd love to host them!!
Top
Jun-18-2017
#5
Bruce Yeti Johnson (not verified)
Alan,
Alan, I love what you did with my materials to make them accessible to other vintage gear nuts! Keep up the great work, Bruce Olympia, WA
Top
Aug-26-2020
#6
Bruce Johnson MA (not verified)
Those hankering for old
Those hankering for old catalogs should know that the Gear Design program at the Utah State University in Logan has been collaborating with their archive library and has now garnered a huge collection of vintage gear catalogs. I think the number is now over 200 and growing. The contact people are Chase Anderson and Clint Pumpherey.
Top
Jan-27-2023
#7
Major Bonwick (not verified)
Dear outinunder.com owner,
Dear outinunder.com owner, Your posts are always well written and informative.
Top

All Material in my "History of Gear" webpages, is copyrighted, and no usage of my material is permitted unless explicit permission is granted by me, Bruce B. Johnson, owner of OregonPhotos.com