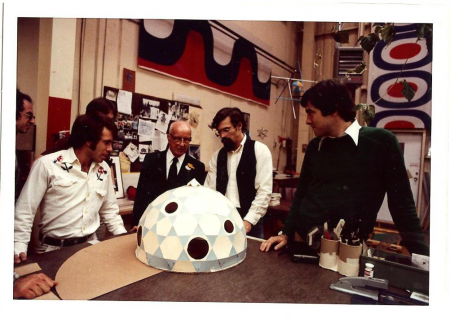 It is great to hear you guys and the early history of the Oval Intention.

I have some files at home that I have been going through and have some content to add.

Yes, I agree Hap was the one who allowed and encouraged the development to happen.  There was a positive interaction between the three main players, Mark, Bob and me that would not have happened in one company out of one hundred.`

And Jack’s Remarks:  “The Intention is our innovative, market leading product for introduction this Fall.  All materials, except the poles from Easton Aluminum, are in current use in NF products.  Biggest constraint is amt of double needle sewing.”

On Oct. 6th, 1975, the first Oval off the sewing floor was accompanied by a ceremony attended by Hap, Bob Gillis, Mark and others in which it was “Christened by Bruce with Freeze-Dried chocolate ice cream”.

The tent was introduced in the Fall 1975 Catalogue with the following quote from RBF’s SYNERGETICS, 1974 “706.10   Sphericity: Compound curvature, or sphericity, gives the greatest strength with the least material.  It is no aesthetic accident that nature encased our brains and regenerative organs in compoundly curvilinear structures.  There are no cubical heads, eggs, nuts or planets.”

From my perspective, I agree with almost everything Mark and Hap said.  I will add that Bob G. was a “live in harmony with nature”, barefooted and squatting on Aptos Park land type of Hippie.  He was a minimalist.  His idea was plain white sheet plastic and PVC or bamboo poles.  His instinct was good.  His structure was good.  His embodiment of the structure was crude and  B.U.

By contrast, TNF was very advanced in marketing,  design and production of technical products.   I think that a large part of the appeal of the O.I. was that it was really stunning visually.  Both from the outside and from the inside.  Yes it was a very strong, stable, free standing tent, and it was also very roomy.  It had sit-up head room over almost the entire floor.  But the single distinguishing attribute to me was when I was on my back, looking up at the canopy or gold triangles and tan pentagons. 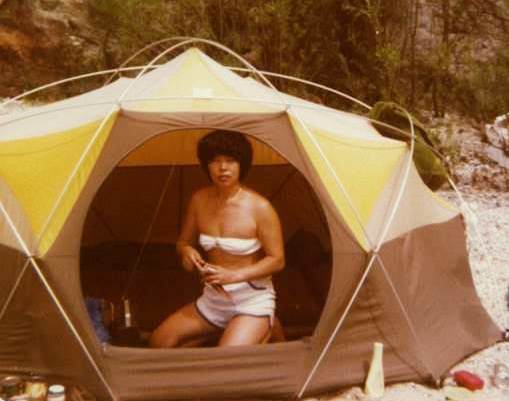 The encounter that Mark and I had with Bob at the Fuller’s “Now House Exhibit” in Vancouver in June of ’76  (which incorporated the Oval, a Chrysalis, a Sierra Parka and a Sylverster Vest) over his breaking the royalty deal with TNF, started the  move to abandon the poles crossing in the ring, which Mark is right was the only thinge that he had a patent claim on, and to go on to the Pole Sleeve Oval.  Which as Mark mentioned, had real advantages over the vertex supported skin, although it was not as pretty as the catenary cut skin of the original.

There are many more stories that you may find interesting like the saga of Stress Corrosion Cracking in the Easton Poles – which derived from arrow shafts and were not, at first, suitable to a curvilinear lifestyle.

Also, in reading the Fall 1975 Catalogue again, it is a classic.  From the two page spread on Insulators, to the middle two page George Stovall Magic Mountain painting to the Ice nine award one can also find cameos by many of the original crew.

Thanks to Al for stirring up some old memories.

JackGilbert
Offline
Joined: 04/21/12
Great detail in all the write
Great detail in all the write-ups, and nothing technical that I could add. What I remember most about Bucky’s involvement was his passion. The look of satisfaction on his face as he explained “tensegrity” to we neophytes (with the exception of Bruce, who was already a devotee). I also remember popping into my office, where the doors were had been closed ( which was unusual) , and finding Bucky resting quietly in my chair with an airline-type black mask over his eyes. I retreated fast, but thought that was pretty cool. Bob Gillis was a interesting character, but wanted to make tents for the masses using cheap materials. Last I heard he was making survival tents for natural disasters. The Oval Intention was an important breakthrough for TNF, and blew right past the Jansport dome tents which had poles crossing only at the top. Much stronger and, as stated, free standing. The fact that they looked very space age certainly helped. Jansport helped start the domes, but we pushed strongly ahead.
Top
Sep-10-2015
#2
susan (not verified)
Ki Pong was my sister-in-law.
Ki Pong was my sister-in-law. It is nice to see a picture of this smart seamstress in her young and strong days. Thanks for the memory.
Top
Apr-15-2016
#3