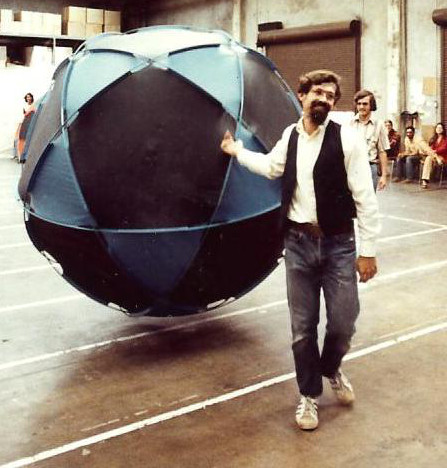 [This is Bruce's response to a story available here.]

Yes, I can write a story about Bucky and TNF.  There are a lot of layers and a lot of emotions involved with TNF and Bucky and me.

It is not surprising that I am in most of the pictures.  On behalf of TNF, I invited Bucky and hosted the grand tour of TNF.  On behalf of TNF, we offered to make the demo 3M six frequency dome shown as the cardboard model, that I made, in the design room and the actual tent - demo, shown being pitched in the warehouse...

I did the math, cut and sewed much of the tent and organized the 10 person team that practiced the erection sequence so that we could pitch it in front of him in less than 10 minutes.  That is Hap front and center on his knees pushing one of the 5 up and over poles.

Bucky visited TNF twice.  Ingrid’s set of photos (I think that Jim Shirley took all these pictures) is from the first visit, October 7th, 1977.  By that time, I had attended two World Game Workshops, had a major role in the realization of the “Oval Intention”, including naming it, and figuring out how to make it through the shop floor, and had an ongoing correspondence with Bucky.

Mark [Erickson], Bob G [Gillis] and I also had traveled to Santa Monica on June 16th, 1976, met with Bucky in his ocean side motel room, and presented him with the Oval, which he loved.

A few of the pictures show the very small gathering sitting on the warehouse floor, listening to a spontaneous, but short, monologue.  Bucky had dinner at Hap [Klopp]’s house that first visit.

The second visit was June 18th, 1983, approximately two weeks before his death.  That was on the occasion of the dedication of the new office building.  I introduced him, he talked for well over an hour.  I was on the stage with him, handing him the set of models that he needed for the talk.  On that occasion, during a break in Jack [Gilbert]’s office, he bestowed the title of “professor of design science” on me.  On that occasion, Mark walked Bucky to the gate at the airport and when he, Mark, returned to the car, he remarked that Bucky did not seem to have long to live (paraphrase).  Bucky had dinner at Cathy and my house that visit.  He requested and consumed a hamburger and fruit.

Jamie, his grandson accompanied Bucky on both visits.

I have a good set of pictures from the 1983 visit that I can scan if you would like a set, like Ingrid’s.

Of course, none of the above would have happened without Hap’s enthusiastic support over many years.