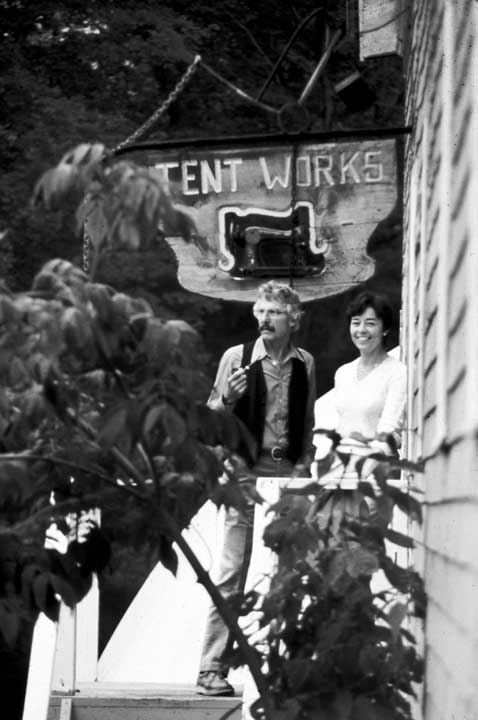 Inspired by natural elements like drifting snow and rippling waters, Bill Moss wasn’t so much a tentmaker as a fabric artist. A graduate of Michigan’s Cranbrook Academy of Art, Moss brought an artist’s sensitivity to his design work at Moss Tent Works, and in the process turned the often-mundane world of tents into an exciting one of elegant curvilinear structures.

A man who called his tents “functional sculpture,” Moss created his first tent, the freestanding Pop Tent, in 1955. It was way ahead of its time and from a designer who would later say of the beauty of tents: “who wants to look at a painting when you can live inside one.”

It wasn’t until 1975 that Moss officially got into the tent business when he and his wife, Marilyn, took out a $200,000 Small Business Administration loan and opened Moss Tents Works in an old factory in Camden, Maine.

Their business chugged along nicely until 1979 when they came out with the Stargazer tent. Made with two overlapping arches (Vesica Piscis) in the same method that had been employed to create the dome roofs of the great European cathedrals, the tent and the Moss company caught the imagination of people, including many who didn’t care much about tents let alone camping. That attention prompted magazines and newspapers, like Time and The New York Times, to do profiles on Moss.

The Stargazer was a classic example of Moss’ design dictum that “nature doesn’t work in straight lines.”

Moss Tent Works followed up the Stargazer with countless other artistic and functional tents, sun shades and even branched out into convention space shelters and exhibits, many of which were inspired by Moss’ deep interest in the work of architect Frank Gehry. Eventually, the company was sold to MSR.

ADDENDUM:   Although Moss passed 20 years ago, the art of his design is commemorated by Marilyn in an expressive website, billmosstents.com, replete with an historical video.   There is also information on purchasing Marilyn’s beautiful new 296-page book, Bill Moss: Fabric Artist and Designer.

Jan-24-2015
#1
Lord Howard Hurts (not verified)
I met Bill Moss when he had a
I met Bill Moss when he had a small design studio on 'the island' in Ann Arbor, Michigan in 1961. He was working on paper tents at the time. I was a teen at the time, but I was fascinated by his paper tent concept. He was also working on paper clothes. He was also working what he called Para Wing shade structures. Very interesting guy. He had an assistant named Jerry? (woman) who would let me wander their small office and view the projects.
Top

03/30/18
Woody
Story Circles that can see this:
Outdoors - All Public
Primary Story Circle:
Our Newsletter