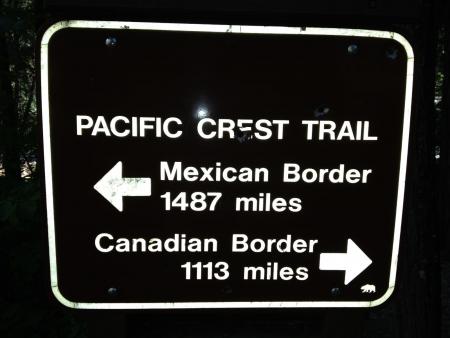 This is how it all ended:

Doctor: This is the best cholesterol panel I've seen.

Me: What??? How is that possible? From my pack I've been eating a jar of peanut butter every few days, spoonfuls of Nutella, Snickers bars, then grilled cheese sandwiches, fries and milkshakes when in a town.

Doctor: It's your walking, all that walking, 2560 miles of walking all within the last five months, walking almost a marathon day after day after day. Your BMI is too low, 16.9.  You've got to gain weight.

I felt so fortunate to be this age, sixty. I delighted in the number. With it came relief, release, willingness…along with enthusiasm and curiousity about what would unfold.

"The wild requires that we learn the terrain, nodto all the plants and animals and birds, ford the streamsand cross the ridges and tell a good story when weget back home." (Gary Snyder)

How Did It All Start?

The 2,655 mile Pacific Crest Trail from the town of Campo on the border of Mexico and California, through California, through Oregon, through Washington to the border with Canada, crossing more than fifty major mountain passes, plus a multitude of wildernesses and national parks, hiking an average of twenty miles a day, and at times carrying ten days of food...except...we missed reaching the Canadian border by about 140 miles, or about seven days of hiking, due to a crazy-ass blizzard, wind, snow and all, as we walked over a 6500 foot pass in the Glacier Peak Wilderness. Yes, we turned back after two days of waiting it out...amidst grief and relief.

Back in winter 2011 we talked about retirement. My partner Sharky Cornell was going to retire October 2012 from being a tanker pilot during the fire season, and I was going to retire December 2012 from teaching in special education. We already enjoyed hiking, and one or the other or both of us mentioned starting the PCT April 2013 as a way to embrace our opportunity to create our own dailyness. We started planning in that direction. June 2012 I had hamstring repair surgery, and was horizontal in bed for many weeks. Daily, Sharky brought home maps he had downloaded and printed. They were designed by someone with the trail name 'Halfmile'. These superb trail maps were to be our guides. My task,lying around all day, was to hole punch and organize pages and pages of maps and put them into binders. One day, after an early morning bike ride, several pilots, along with Sharky, stopped by for coffee on their way to the base, and I started reading sections of the map to them. Several maps mentioned previous fires and this guy or that guy had flown on it. Hmm, we'd be walking through burned areas. Eegads!

Second set of stories are here.

How Did We Prepare Physically for the PCT?

Being Sixty on the Pacific Crest Trail - 2nd Set of Stories