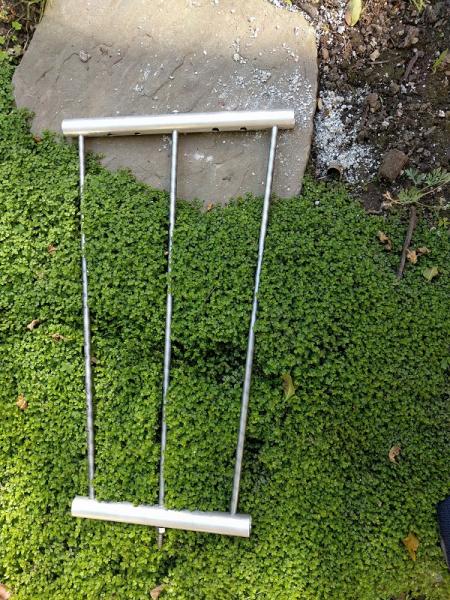 [Note: any corrections or extensions to this will be posted as comments below.]

Circa 1974, an optimized camp-fire cooking-grid was designed for George Rudolf’s DMC wholesale corporation.  The packet was intended to correct inherent limitations of the -- then current -- mono-bloc grids of welded #304 stainless-steel tubing.  Although these were well-crafted, from high-temperature tubing, sales were beginning to flag.  The units were unwieldy to pack; were subject to damage during transport; lacked flexibility in use; and were hard to clean under back-country usages.  Added to these failings (from a wholesale marketing view-point) were the difficulties attendant in warranty-coverage of fragile welded joints.  Our intent was to simulate the function and cost of the mono-bloc grid, while wholly removing the problems. 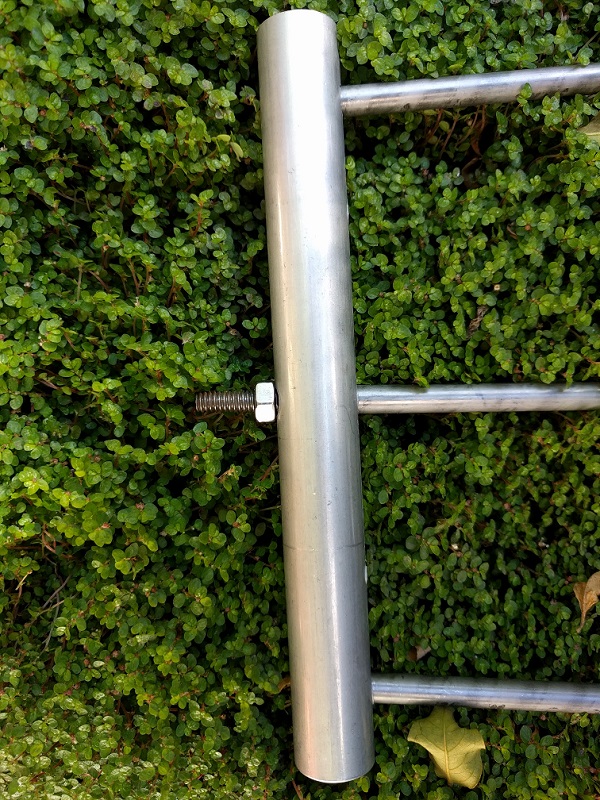 Our design effectively resolved all these issues.  However, it brought up yet another stumbling-block, the strong potential for market disruption as cut-rate “off-shored” versions inevitably hit the “market”.   Since the material costs of the tubing make up the great majority of the production expenses, rip-off companies would invariably choose cost-slashing substitutions of  markedly inferior tubing: caveat emptor!   The high-temperature  strength characteristics of the selected tubing are sin quo non.  Thus, this scenario would, by inference, down-grade the reputation of our proposed product: Gresham’s Law in action.  We reluctantly shelved the project, but only after producing (and retailing) just enough packets to put the design into the “common domain”.  The above potential limitation is still salient, so any commercial venture to produce such a grid would face the same prospects.  Fortunately, this difficulty is unique to commercialized sales of grids and isn’t applicable to user-made one-offs or to scaled-up club or crowd-sourced production. 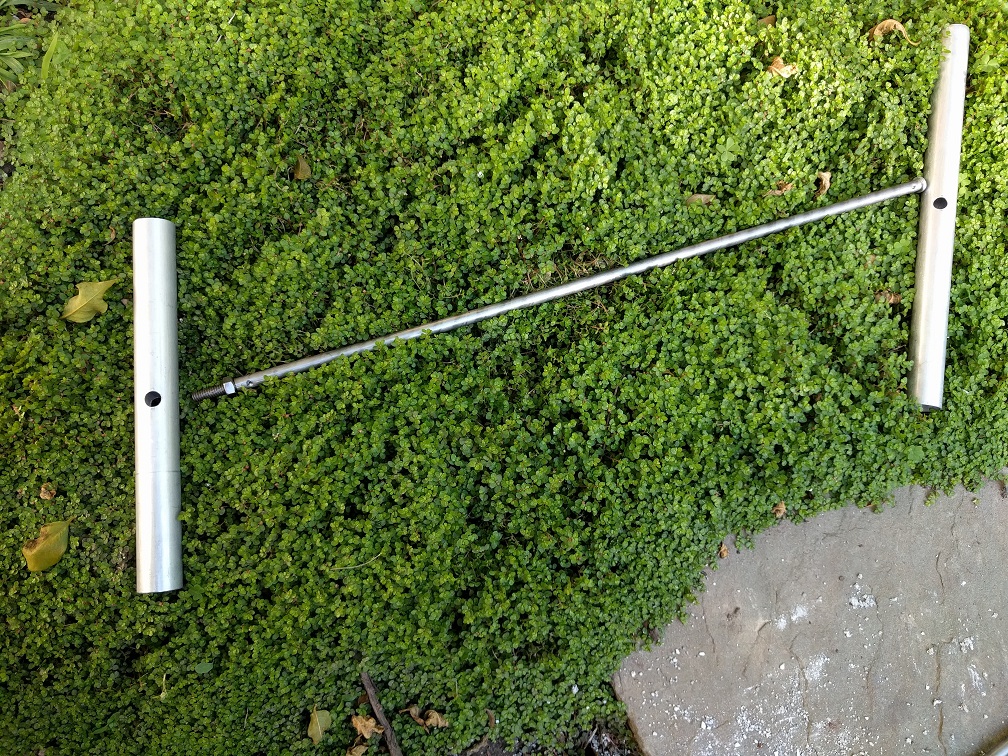 Although quite a few one-off grills have been produced in the last 4 decades, primarily in Australia and Canada – Americans having gravitated to camp-stoves rather than cooking-fires – there would still remain a strong potential-market in the US were it not for the inevitable off-shore rip-offs.  Having no potential for slave-labour price-trimming, the importers’ target is obvious: the materials.   As a prelude to what may be expected, a vague acquaintance once called me at home to complain “the design doesn’t work!”  Old school ties were inadequate to prevent me from asking if he’d been fool enough to use aluminum-tubing grill-members, rather than the specified high-temp stainless-steel.  I hung up as he whined that “It was the very highest grade of aluminum!”   Papier maché , anyone?  But, the “very highest grade!” 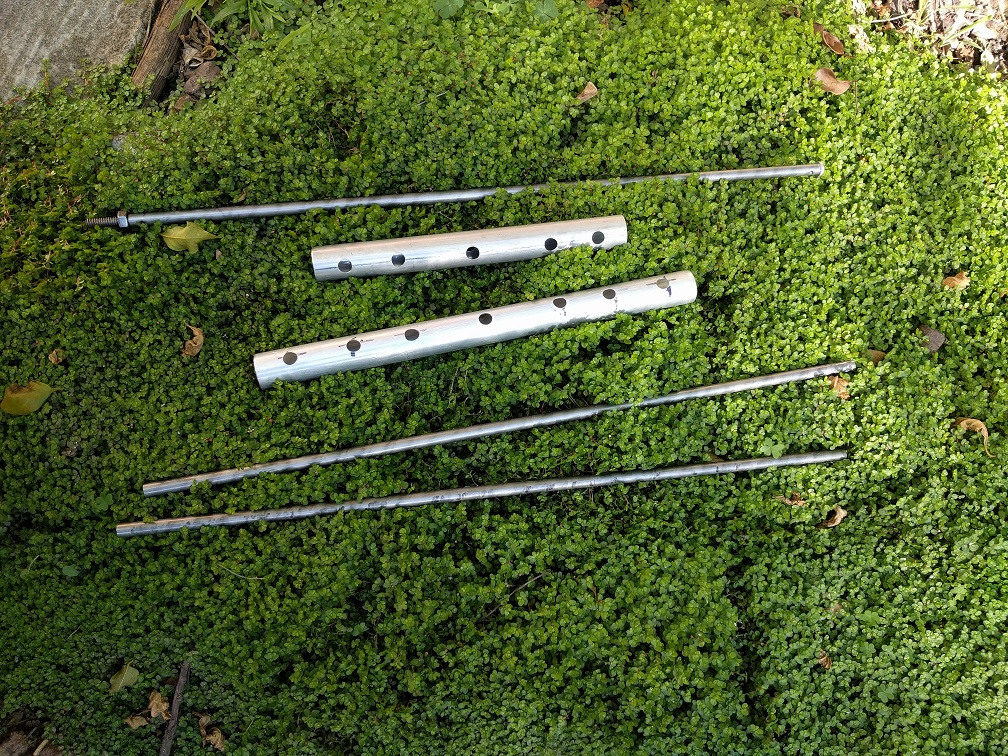 Fast forward to 2017.  The lack of commercial potential of the grid had short-circuited further evolution of the design, but this constraint has been transcended by 2017.  Emphasis can now be focused on developing a more universally-useful model, without regard to market-placement.  The cuttent retail-availability of thin-wall 5/16” o.d., 314L stainless-steel tubing [through Amazon.com] makes practical the production of high-end one-offs, allowing for design evolution. 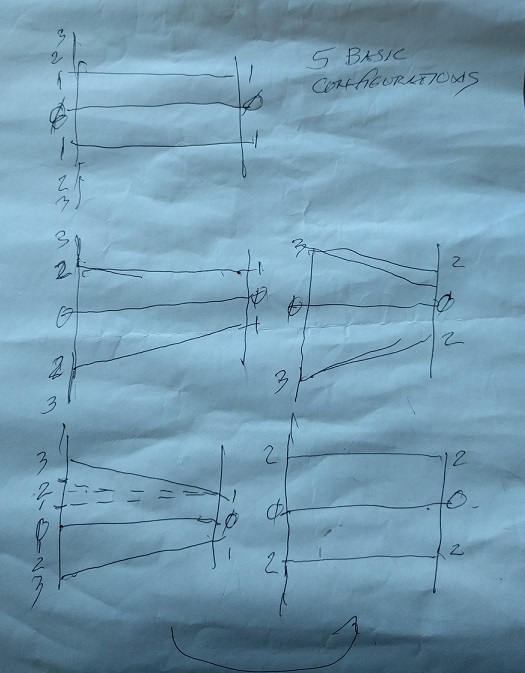 Amazon’s 36” tubing lengths are split into 18” grill-sections, a substantial improvement over the 1974 specification of 16”.  It should be noted that the nominal 36” length might vary a bit, so be sure to measure and cut at the précise center-point.  The wall thickness of 0.028” remains constant.  The increase in tubing diameter -- from 0.25” to 0.031” – increases the robustness of the grill.  Under high-temperatures, the 316L alloy is even more corrosion-resistant than is the original 304 alloy.

Normally, I’ve found the original three grill-sections to be adequate, but the addition of two more struts makes grilling fish [kebabs, whatever] a lot easier.  It also gives a better support to large pots/pans.  The extra struts may be left behind for ultra-light back-packing. This five-strut option is obviously somewhat expensive, but that’s life.  Canting the cooking struts, to achieve even greater flexibility, appeared to be a reasonable option.  An apparent increase in functional- flexibility seemed result, but there any slight benefit is far outweighed by complicating the production of the grill cross-members.   To permit angled tubing-entry requires elongating all but the central through-hole.  Reality trumps whim, except in politics. 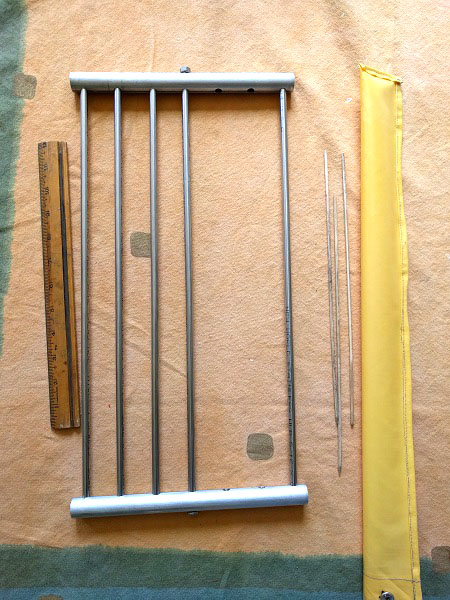 The optional  five-strut redesign, augmenting the original three-strut design, greatly increases the flexibility of grill use.  Of course, this leads to a greater weight and cost.  Still, the weight of the beefed-up grill is miniscule compared to carrying a couple of week’s worth of odorous fuel (or purchasing and packing propane canisters that also must be lugged out once emptied).  To avoid complicating matters, the same cross-members are used as with the three-strut model, simply adding two additional grid pieces.

Since the two [identical] cross-members, running parallel to the flame-pit (and not crossing it), are not subjected to much heat, 6061-T6 aluminum tubing is adequate.  The length of the tubing cross-members is set at 9.5”: eight-foot tubing split into fifths. Paralleling the stock used for telescoping tent-poles, 3/4" o.d. tubing, with 0.049” wall. Is optimal.  On a greatly-expanded grid, it’s advisable to delete the central compression-slat, substituting two out-board sections instead.  All holes are drilled using 21/64” bits for a 1/16” tolerance.

On the cross-members, allowing 24mm for the end-extensions, seven holes are gang-drilled at a uniform spacing of 36mm.  Only the central hole is through-drilled: all the others are drilled only to one side.

The grill-tubing sections dead-end on the inside walls of the facing cross-member tubes.  In use, with the cross-members supported by roughly-comparable rocks to each side of the fire, the slight torsional-flexibility of the composite grid is advantageous.   It allows odd-shaped rocks to be safely spanned, as opposed to the rigid mono-bloc design that effectively acts as a tripod unless it’s carefully shimmed.  .

The central grid-section is capped at one end with an epoxied-in machine screw.  At the far end is an epoxied-in threaded adjustment-rod: 0.25” stainless-steel stock fits the inside diameter of the 5/16” grid-tubing.  Rather than epoxy-setting, with its potential for glue drips, staking in place is an option.  Air-pressure build-up is alleviated along the minor thread-gapping for the staked fittings, but a 1/8” relief hole – drilled through the end-fitting ---will be needed for the epoxied version.  Drilling is facilitated by snugging a nut against the cap head and by choosing a Phillips-head screw: its central depression provides a nice starting-point for the drill bit.  After gluing, double-check to make sure that the hole is clear!  For one-offs, these pieces can be cut down from a 0.25” x 2.5” stainless-steel bolt [with a 20 thread], cutting the bolt @ the 1.5” mark.  In opposition, these fittings provide a secure compression-assembly with enough play to let the grid flex a bit.

That said, I personally prefer the aesthetics of setting the fittings with epoxy glue, this requiring an adequate venting-hole in the cap-end.

A simple nut, lightly secured by hand, provides the slight tension required.   A thumb-screw is not needed, and it would interfere with packet-nesting.  Since it’s inevitable that the nut eventually will be fumbled & lost, it’s expedient drop a replacement nut into the carrying-case.  Although the disassembled grid is easily cleaned with camp-side grit or mud, it’s still useful to transport the five components combined in a waterproof sack.  To avoid loss of the grill-packet in transport, a garishly-coloured case is essential.

Thus speaks the voice of experience. Keeping the components together is obviously desirable, as is protecting your pack from soiling with residual oily soot.  Final soap-cleansing can be taken care of at one’s ultimate destination. 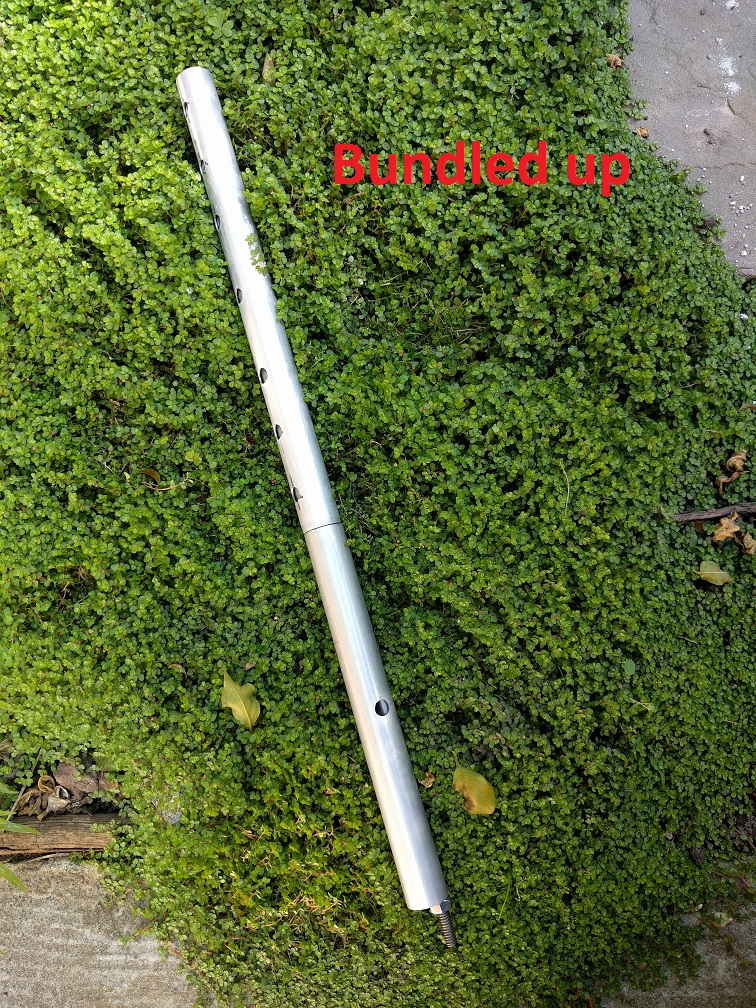 As a nicety, carrying long bamboo skewers, nested in the non-central tubing, is very convenient.  These allow such luxuries as mushroom shish-kebabs, greatly appreciated well away from the trail-head.

Optional uses for the steel tubing are as follows: directing a flow of air at the base of burning kindling for fire starting; used as a straw to access otherwise-inaccessible melt-water,  trickling between glacial rocks: garment-fabric provides a rudimentary filter against rock-flour; and using the struts for an emergency splint above tree level.  Other uses will suggest themselves.

Although not conducive to back-packing, greatly-expanded versions of this compression-grill have their place.  The advantages of portability and ease of cleaning remain, even with a 2-foot by 3-foot version.  Obviously, the components are scaled up, using more robust materials.  As noted, the only caveat is that the central compression-section should be augmented with an additional equivalent to each side.  Although not precisely back-packable in the usual sense, these units are still luggable and can be easily cleaned of baked-in mutton fat.  They can even be made of steel rod, rather than the more expensive stainless-steel tubing.

Boosting the number of grill-sections to seven [optimally nested] would be useful. A aveat on the stuff-sack is that, considering the weight of a suitable waterproof material, A draw-cord wouldn’t be usable.  The best option is to roll and snap the closure.  Since inverting the small-diameter sack is tedious, seaming from the outside is advisable. If raw edges aren’t acceptable, the easiest option is to bind the seams with bias-tape

Apr-03-2017
#1
PhillipScott
Offline
Joined: 09/18/13
'Lo, Al: I am well aware that
'Lo, Al: I am well aware that called my last proto-type grill, "final". However, "Final" is ,a word that should never be used. The 36 mm hole spacing should be dropped to 35 mm in order to shorten the cross-members, from 9.5" each to 9.2" each. The 0.6" shortening makes access easier to the threaded end-fitting. Due to the constriction of the i.d. of the 0.75" o.d. cross-members, the longer length required a bit of diddling around to set the nut in place on the packaged grill. Although the change is trivial, the glitch isn't worth passing on. Other than that, the grill is fine, working well on my largest pans as well as my reduced-bottom wok. I won't bother making cross-members to the new spec, the variance not being noticeable for sample purposes. As mentioned, the female S-spring snap isn't properly set: I don't seem to have the correct tool. Oh well, it gives the idea.
Top
Aug-10-2017
#2